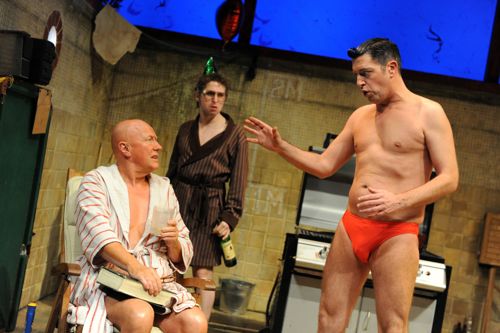 A re-imagining of Homer’s Odyssey from the point -of-view of faithfully waiting wife Penelope’s suitors, it explores what happens to the men when action is thwarted and purpose diverted. Do they gang up together and storm the castle to take Penelope by force? No. They sit around sunning themselves, drinking fruity cocktails. Then they turn on each other like a pack of dogs.

At the start of the play we meet the four remaining suitors, the last out of hundreds who swarmed Penelope’s house when her husband Odysseus went missing after the Trojan War. Clearly in awe of his godlike memory, they’ve camped out at the bottom of an empty swimming pool from which every day they plead their case to her via live video broadcast. That blood spatter reminds us of what happened to the other ninety-six suitors, murder or suicide or plain old age taking them one by one. The last death in particular haunts melancholy Burns (Aaron Monaghan), and proves to be the key to any hope of their redemption.

The men bitch at each other comically, like elderly ladies-who-lunch, but make no mistake – though their competitive edge is blunted it’s constantly being revived by the one man vain enough to keep it going. Quinn (Karl Shiels) is determined not to lose his looks or his edge like the others, though he is definitely the man least likely to win over Penelope. The geriatric Fiz (Niall Buggy) and the bombastic Dunne (Denis Conway) are ultimately too genial and simply not in the game anymore – though both make riveting attempts to capture Penelope’s heart, they are ultimately broken by the years of waiting. When every man relates the same grotesquely frightening dream about Odysseus’ return, we know it’s only a matter of time before Burns and Quinn showdown.

Above them all, the wordless Penelope (Olga Wehrly) reigns, only her eyes telegraphing the extreme loss and loneliness she feels. She’s trapped in the super-ego, aloof and untouchable, while the men rage and relax in id-land below.

Washington audiences are lucky to have the chance to see Druid, a company at the forefront of contemporary Irish theater and decorated with over fifty awards thus far (both in Ireland and internationally). The engaging ensemble cast is helmed by director Mikel Murfi, who handles the challenge of staging a play that mainly consists of long monologues extremely well. Special mention has to go to Sabine Dargent’s set and costumes – creating a both believable pool environment and a hypnotic “heaven” for Penelope, along with the hysterical swimming togs.

Walsh’s language is so distinctive, a hyper-poetic mash-up, that it echoes in your mind for days afterwards. Here he mixes the violent imagery of Greek tragedy with the comic stylings of sitcoms, and it’s a striking result. At no point did my attention wander during the stretches of the men’s proposals, isolated by delivery to a microphone. They are, each one of them, so deeply connected with an emotional resonance that they enthralled the audience on the night I attended. Perhaps it’s the Irish accents, making it simply inevitable that the rhythm of Walsh’s words bind you in a bardic spell. Perhaps it’s the actors’ complete understanding of the characters they portray, or the truths they bring to life about loss, the decay of the body, and the demise of the mind.

As the men fight against the knowledge that their decline is inevitable, I was reminded of Lord Byron’s lament, “The days of our youth are the days of our glory.” The only thing left to do is the unselfish thing, the right thing, not for dominance but simply for love.