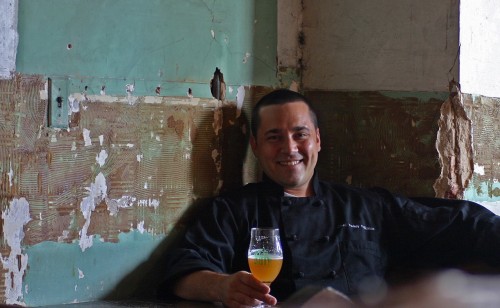 For Folkman, the best part about his job is simple: “It’s rewarding to be able to wake up in the morning excited to come to work,” he says. The kitchen staff at Granville Moore’s is like a family–they work together and hang out together, they treat each other and their guests with respect, Folkman says. “You work here until something happens that you can’t. There’s a very low turn over here,” he says. “When anything personal happens with other employees, everyone feels it.” I’m guessing it also doesn’t hurt that the size of the small kitchen at Granville Moore’s makes everyone feel a little closer.

If you get the chance to ever talk to the chef, you’ll easily realize that Teddy is a gregarious ball of energy. He’s passionate about cooking and full of ideas. When I asked him what his plans were for the future of Granville Moore’s and his career, he rattled off an entire list. For starters, Granville’s will hopefully open for lunch in the summer and they’re working on weatherproofing the patio. Folkman also wants to open up another restaurant at some point on H street NE, though he’s taking “baby steps.” “I definitely have one more in me,” he says.

There’s usually a part of these interviews where I start geeking out with these chefs and with Teddy I hit the peak of my food nerdiness when we got to talking about the DC restaurant scene. “It’s good to see famous chefs coming to DC. They’re not opening the usual restaurants, instead they’re thinking outside the box,” Folkman says. “I’d like to see a tighter DC food community where we cross promote and take care of one another.” According to Folkman, one of DC’s assets for keeping the food scene fresh is that every few years with new elections there’s an influx of people who have yet to experience our restaurants.

“I like that it’s such a diverse scene. I love the dive bars,” Folkman says. “I like that tap rooms are opening just as fast as wine bars.” Folkman is one of the growing number of chefs cooking with beer and highlighting craft beers on their menu. He adds that he thinks the number of people who appreciate food and have an appreciation of good ingredients is growing in DC.

Speaking of beer, check back at 3 pm for Teddy’s recipe for halibut with a cream beer sauce and root vegetables.