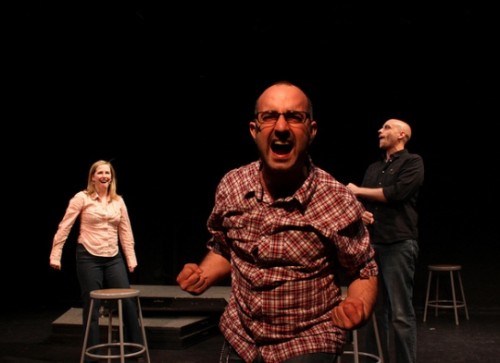 The passion behind the tourney starts with Commissioners Justus Hammond and Maggie Dempsey who were brimming with enthusiasm when I talked to them on the tourney’s opening weekend. They are FIST veterans and are excited to be running the festival of Improv, despite not being able to perform.

“It’s like asking people to prom,” Hammond said when describing the months leading up to the tourney. Local performers who decide to compete spend a lot of time putting together the right team of Improvers.

And they take the competition seriously.

“If Topher and I were on stage together- I would be trying to seriously cause him some comedy harm,” jokes Dempsey.

Of course finding the right team isn’t always about assembling the three funniest people together.

“I don’t necessarily find who I think will win, but those I think would be the most fun to play with,” says WIT managing director and reigning FIST champion Topher Bellavia. For him Improv has been a life changer for him. Struggling with his life as a Capitol Hill staffer and suffering with a bi-polar condition, he ran across WIT from an ad in the Metro Weekly.

“Improv saved my life. I really learned to trust people again and get a handle on my emotions,” Bellavia admits.

Improv also become a passion among the FIST teams themselves. By day they are teachers, lawyers, and software designers. By night they find their escape through making others laugh.

“It’s almost like an addiction- that feeling to make someone laugh,” says performer Will Groom.

“It’s like an outlet,” adds team member Melanie Gart, “I need that outlet to dump all that extra energy, it’s such a fun high.”

The team has been performing together for about a year and prepared for the tournament through regular practices in the lobby of Melanie’s Condo. A practice space that turned into an impromptu venue during an ill-timed open house.

So if your bracket is broken or you are a Pittsburgh fan, find comfort in knowing you now have an alternative to the Madness in March. Shows are cheap (just $10 a ticket), funny, and will have you more involved than watching a Gus Johnson buzzer beater.

Ya I said it, it’s not like you made that winning three-pointer, you just watched it on TV.