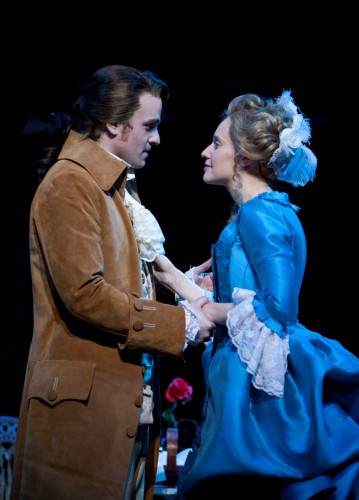 The show chronicles the life of Liberty Smith (Geoff Packard), an unsung hero of the American Revolution. In a serendipitous, Forrest Gump-like chain of events, Smith ends up a key figure in various turning points of the war- all while trying to get the attention of the woman of his dreams: Martha Dandridge.

Unfortunately she loves another man, Liberty’s best friend George Washington. Hopefully you know the rest of that story.

Liberty Smith finds himself rubbing lots of famous elbows while on his quest for the heart of the future Martha Washington. Discovering electricity with Ben Franklin, writing the Declaration of Independence with Thomas Jefferson, and going on a midnight ride with Paul Revere are just some of the accomplishments Smith can claim to his name.

Of course Smith isn’t a real person, but that doesn’t stop the show from exploring America’s birth from the viewpoint of young Liberty Smith. Despite the premise, this isn’t PBS edutainment- the story finds humor wherever they could fit it in. The local crowd chuckled at James Otis’ group of rebels he called The Brookings Institute, and everybody will chuckle at cute one-liners woven into the prose.

Packard, who is fresh off his run in the critically acclaimed Candide over at Shakespeare Theatre, is perfect as the strong-willed Liberty Smith. Kelly Karbacz plays the plucky Emily Andrews, a modern minded woman in a pre-woman’s suffrage world. The supporting ensemble is solid and are full of memorable roles: a Paul Revere that needs to get away from the wife, a somewhat feminine Benedict Arnold, and a Marie Antoinette with rather high fashion tastes.

While Liberty Smith is cute and entertaining all around, I was surprised to hear a few not so PG words in the dialogue. It’s nothing that should keep families away from the show but it’s definitely worth a heads-up.  Regardless, the opening night of Liberty Smith received a rousing standing ovation, a sight I believe the show will see many times in the foreseeable future. It takes what would of probably have been an entertaining animated feature and turns it into a very enjoyable spectacle of song, dance, and American history.