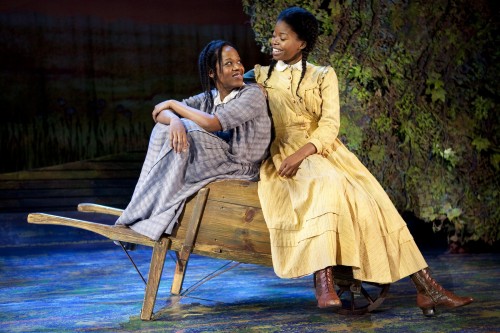 The touring production of The Color Purple that has come to the National Theater is a mixed affair, making it a good match for the uneven musical itself. Talented performers and superb choreography make war with poor direction and merely okay songs. After two acts the performers have won the battle, but it’s a somewhat phyric Pyrrhic victory. The whole thing is visually appealing and a pleasant listen – with a few caveats – but you’ll be hard-pressed to remember any of the songs the next day.

Which isn’t to say you’ll forget you’ve been to a show. The Color Purple is a big and grand show in the modern Broadway style. Shows like this or The Lion King choose spectacle over narrative. There’s nothing wrong with that – David Lynch has made a film career out of it. If you’re walking in thinking you’re going to get the nuance and character development that you would from Alice Walker’s novel or even the film, however, you’re headed for disappointment.

What does work well here is the performers. Everyone from Dayna Dantzler as Celie down to the ensemble members portraying nameless townspeople, all move well and sing beautifully. When they’ve been set in motion with a plan – like, for example, the opening church sequence or in Harpo’s juke joint – they’re poetry in motion and a delight to watch. But when the dancing stops and we move from choreographer Donald Byrd’s purview into director Gary Griffin’s blocking all the subtlety evaporates. 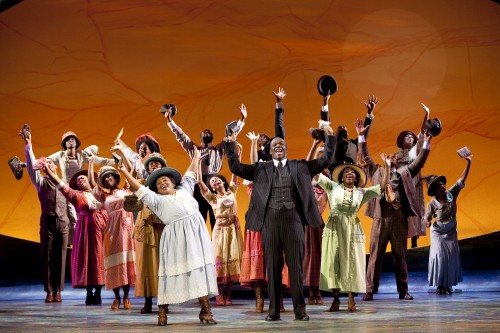 I’d normally be reluctant to hang this much blame around the director’s neck; the actor’s job is to convey the truth of the characters to us and when that doesn’t happen they’ve got to be the first place to look. But so much else that is purely up to direction is so poorly handled it’s hard not to give the actors a pass.

Within the first act we move across five different time periods… or so the synopsis tells me. You’d be hard-pressed to figure it out from the way the show is staged and dashes through the action. There’s no indication that we’ve moved across two years as an actor crossed the stage. Would a lighting cue have broken the budget? Maybe a costume change?

Act two, on the other hand, wants us to be sure we realize the characters have aged and outfits them with awkward shuffles and heavily graying hair… even though one, Celie, hasn’t quite hit 40 by the time she’s slathered with the pancake makeup and had streaks added to her hairdo. A few characters with smaller parts seem to have found the fountain of youth however, most particularly Squeak and Grady who never seem to age at all.

Big colorful trees are rolled out onto the stage mid-song to be admired, and after Celie exits the stage with Harpo, having said “take me there,” she’s wandering about in the midst of the action again fifteen seconds later. None of it is unforgivable but it’s unnecessarily sloppy. 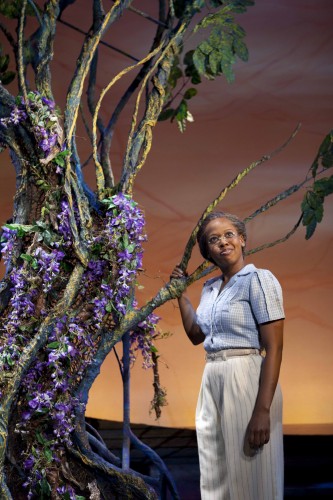 Other issues trace their way back to the musical itself; there’s what seems meant to be a variation on a Greek chorus in the three church ladies. However once the first act ends they effectively vanish for no discernible reason. Nettie and Celie talk about Celie’s inability to have and children that she might know and keep, then immediately sing about their kids playing together.

So what does work? The ensemble numbers most of all. Byrd’s choreography is a delight to watch and everyone sings well. The lone questionable number is Celie’s imagining of the challenges in Africa, which gets a little disjointed in its length and scope. Dantzler and Augustine have good chemistry as Celie and Shug, and both sing their parts appropriate to their characters rather than trying to chew the scenery and sing to the rafters.

The Color Purple is a flawed production of a similarly flawed musical. If you’re in the market for A Night Out At The Theater it’s the destination for you. Based on the large number of open seats you’ll be able to find some discounted seats but you shouldn’t dawdle; this is not the opening night crowd of a show that’s going to be extended – I estimate about 1 in 5 seats was empty.