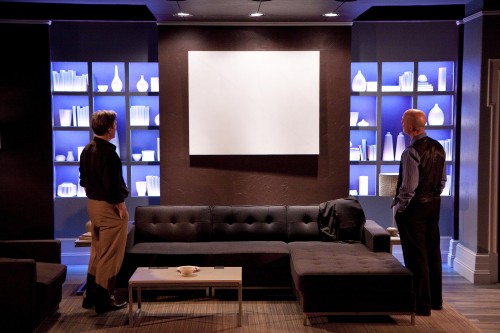 If you could take the premise Yasmina Reza’s “Art” and turn it into an episode of Seinfeld, it would have been a classic.

George: What is it?

George: Never heard of him.

Jerry: Well he’s a classic- and this painting will be as well! I got it at such a steal!

George: I am speechless. I am without speech.

George: You think this is art?!? This is a white piece of shit!

Kramer slides into the apartment

Jerry: Kramer! What do you think about this Antrios?

Jerry: Is this not the most striking piece of art you’ve ever seen?

Kramer: I’m staying out of this one fellas- absolutely Switzerland on this one.

George: You cannot be Switzerland!

Jerry: Wait, so what country am I?

George: Clearly France, your taste in art makes as much sense as French Toast! It’s not even toast!

It is an exchange you wouldn’t be surprised to see while surfing the TV and one you can expect in Signature Theatre’s production of Art. The return of the late 90’s French dark comedy to the DC area brings together a strong trio of actors. Along with John Lescault, Signature’s production also includes Helen Hayes nominated actors Michael Russotto and Mitchell Hébert. Even though the three have only performed together since the show’s March 29th opening, they mesh together like three gentlemen that have known each other for decades.

Everything about Art is simple: a premise that is understood two minutes into the play, a single set that serves as the apartment for each character, dialogue driven action, an 80-minute running time without an intermission. It’s as if Reza imagined the play as a potential three-camera sitcom pilot.

Resident Director Matthew Gardiner understands all of this and highlights the most important part of the show: the words. Each conversation and monologue is punctuated ever so slightly with spot-on string cues from sound designer Matt Lowe. Gardiner doesn’t need to do much to dress up the show- it hits home as is.

The show takes place in Paris where Serge (Lescult) buys a new piece of art. To Serge it is well worth the 200,000 franc price tag; to his friend Marc (Hébert) it is, “a piece of white shit,” a purchase that is more of a joke than an investment. From there a 15-year friendship unravels as underlying tensions and feelings rise to the surface. Their friend Yvan (Russotto) is caught in the middle as the two bicker over issues that go beyond artistic taste.

To say that Yasmina Reza’s “Art” is about the definition of art would only scratch the surface. In between witty banter and argument over the artistic value of a white piece of canvas is a breakdown of relationship between three people. What starts as an argument over arts transforms into a test of their relationship.

Serge is caught up in the acceptance of others, mostly of his colleague Marc whose taste skews towards counter culture. Yvan is an eccentric who has always provided entertainment value to the group. However these roles are challenged when Serge stands by his controversial art purchase. Meanwhile Yvan is at wit’s end planning an upcoming marriage that threatens to take his attention away from Serge and Marc.

The show questions the very meaning of self-identity. In the end the characters as well as the audience will be left asking, “are you who you are because of who you are?”

Or is it who your friends are that make up who you really are.