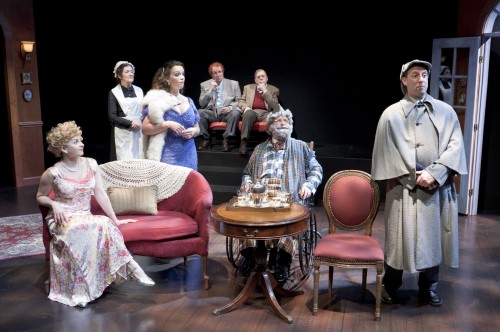 I am not a Theatre Critic.

I don’t have an MFA, my grades in English were that of the C+ variety, and I don’t claim to have an extensive knowledge of theatre history.

That doesn’t mean I am without credibility. I have been involved with theatre for over 10 years and in my latest reincarnation I am a stage manager. I am also a blogger that’s been blogging before they called it blogging. I hope that my experience behind, on, and in front of the stage lends a unique perspective in my theatre posts for We Love DC.

It is also because I am not a critic (but kinda am) that I was able to laugh throughout MetroStage’s production of The Real Inspector Hound. From the title you might assume that the show is a hokey whodunit- and in part it is. At its core however, the show is a farce that shamelessly pokes fun at the profession of theatre criticism and culminates into a collision of critics and actors that is very reminiscent of Durang’s The Actor’s Nightmare.

At the center of Tom Stoppard’s one-act are two theatre critics: Birdboot (Michael Tolaydo) and Moon (Ralph Cosham). The two sit together as they watch and review a what is perhaps the worst mystery/thriller I have ever seen. During the show the two compare opinions and lament about their problems outside the theatre. Moon, the back-up critic, dreams of becoming the top banana while Birdboot uses his status as a reviewer to get closer to the talent than his wife might like. As the play-within-a-play  trudges on, Stoppard decides to tell the critics, “you just got Inception’d!” The critics get pulled on stage and become a part of the show themselves.

The show seemingly offers the audience a view (albeit tongue-in-cheek) of the life of a critic, a role Stoppard himself had and drew upon for the show. While reviews that attempted to be more artistic and masterful than the plays they covered is something I believe is a bygone of the 60’s (when the play was written), there are some elements of a critic’s life that still ring true today. There is indeed a friendly relationship between fellow critics, I always enjoy hearing what TBD’s Maura Judkis has to say about a show and I always say hi at the many press performances I see her at.

I also got a laugh at the idea of comparing theatre critics to quarterbacks on a football team. I wonder if WaPo’s Gene Wang dreams of Michael Lee meeting an unfortunate demise so he can become the main beat reporter for the Washington Wizards. It only goes to show that competition can be found on every level of life.

The utter horridness of the murder/mystery play within-a-play adds to the hilarity when the Birdboot and Moon wax poetic about the show’s finer qualities. It makes you wonder if the critics need to overcompensate for a lack of analysis- or perhaps they need to feel fancy in order to feed their growing egos. The mystery is so contrived with drawn-out ominous pauses, phone conversations that force feed you the premise, and acting that makes the actors look stiffer than the statue that is Derek Jeter.

Birdboot wined and dined the actress in the role of Felicity (Kimberly Gilbert), and promises to make her a star through his review. Through her performance however, the audience knows she is less talented than Birdboot says. His interests shift during the show to the voluptuous actress playing Lady Muldoon (Emily Tonwley). The rest of the actors on display are stock characters: Simon (Doug Krehbel) is a handsome yet suspicious Dexter-like character, Inspector Hound (David Elias) dons a Sherlock Holmes-like outfit, and Mrs. Drudge (Catherine Flye), piles on the cockney as the maid and housekeeper.

Luckily with most farces, a deep analysis of the piece isn’t needed to tell you that it is an entertaining romp that will make both critics and regular patrons laugh. The show is more about the dialog than slapstick but it has that “meta” quality that makes it work. This one will have a special place in my heart as a constant reminder to never compare any show to the human condition.

Well unless it really does.