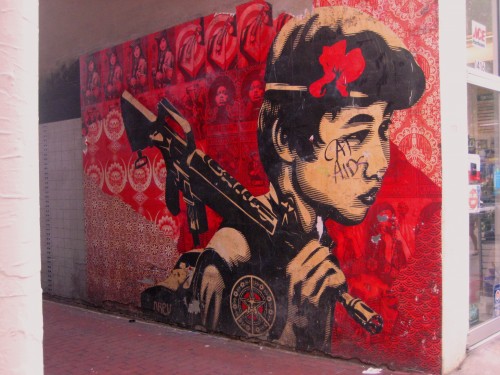 Heading west from the 14th Street corner of P Street, as jarring as a fence or brick wall, you’ll crash into a young Cambodian soldier, a machine gun hanging off his shoulder, a brilliant red flower pinned to his beret. The alley wall ends, but his steadfast gaze does not; and whatever his destination, it seems to lie far beyond the world of Whole Foods shoppers and restaurant patrons that cross his path.

Instinctively, the work represents thoughtful propaganda: a bold color scheme; simple, stylized shapes; and a gash of scarlet that draws the eye along the line of the machine gun…. When for the past decade the American public has consumed a war of desert operations and afghan uniforms, the brooding child fighter surely serves as a loud reminder that our war is not exceptional—others have preceded it, as equally horrendous and powerful in public memory. Titled “Duality of Humanity 2,” it could also mean just that— like his arm that carries a weapon while bearing a peace sign patch, how ironic is it that we fight wars to forge peace.

Or, in another twisted layer of irony, the whole thing could mean nothing at all.

As part of a street continuation and expansion of the gallery’s 2008 exhibit “Regime Change Starts at Home,” Irvine Contemporary on 14th Street commissioned the piece to internationally-renowned street artist Shepard Fairey; and though he is widely known as the creator of the now-famous Obama “Hope” poster, Fairey’s fame originates from a decidedly apolitical view of art. In 1989, while still a student at the Rhode Island School of Design, Fairey launched a sticker campaign  in which he and a “posse” of friends plastered a stenciled image of Andre the Giant all across Providence (and eventually the East coast). Even after changing the tagline from “Andre the Giant Has a Posse” to “Obey Giant” (after the WWF filed copyright complaints over rights to the wrestler’s name), Fairey’s “Obey Giant” gained momentum within the skating and underground art community, soon becoming its own brand, and the artist’s logo.

Though he refers to the original image distribution as the Obey sticker  “campaign,” in some ways, it was anything but a “campaign.” Like Warhol and Lichtenstein before him, Fairey appropriates and reworks popular images “in the name of fun and observation,” according to his own Manifesto. A self-proclaimed “experiment in phenomenology,” “The sticker has no meaning but exists only to cause people to react, to contemplate and search for meaning in the sticker.”

“Meaninglessly,” then, the image appears throughout Fairey’s body of work, and the alley-long P Street installation is no exception. The Obey face figures prominently in the soldier’s armband and surrounding patterns… 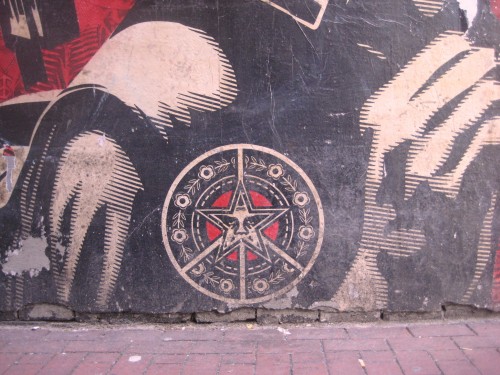 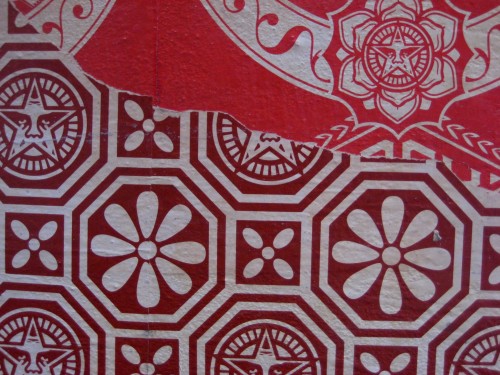 …and shows up in nearly all of the separate wheat-paste posters that compose the backdrop of the collage (see the armbands in the below examples): 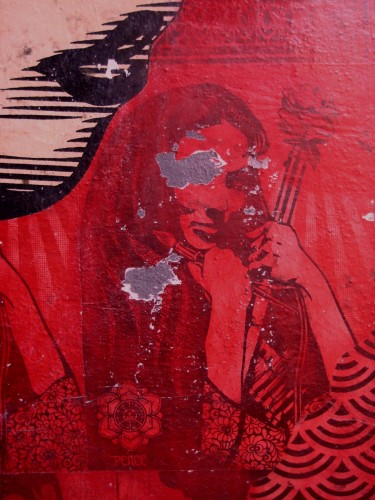 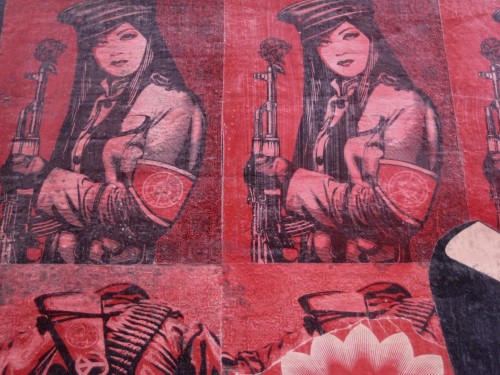 These back drop images are in fact recognizable, stand-alone Fairey pieces. In the bottom right corner of the collage, brushing the young soldier’s lips, is Fairey’s “Revolutionary Woman with Brush” (pictured first above). At the top left corner, my personal favorite: “Peace Guard” (pictured second). Flanking the boy’s beret are “Afrocentric” and “Kiss Me Deadly” (among others).

All in all, the entire alley contains just one “never-before-seen” Fairey stencil (“Rose Girl,” below, was released through Irvine Contemporary in 2008)– everything else (besides, of course, the non-Fairey pieces, to be reviewed in a separate post) is a previously-released stencil. 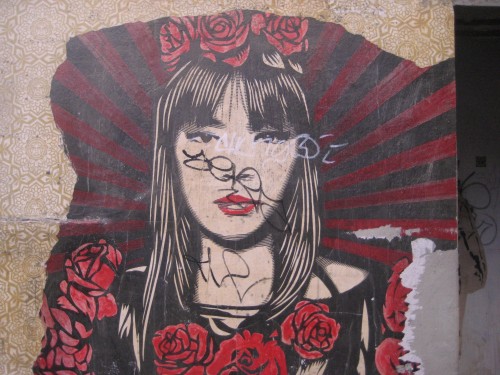 But the mural is still unique, says Irvine Contemporary Director Lauren Gentile. Firstly, the posters were hand-collaged by Fairey and his crew (over the course of a week, and with intermittent help from DC Fairey enthusiasts); and each poster was an original print of the image.

Explaining Fairey’s work: “They’re not [commercial] posters. [There’s] the screen print, which is usually in an edition of 450…and they’re the most price-accessible work. Then [Fairey] does…hand-painted multiples [HPMs]…on wood and metal. They’re usually editions of two. He also does them on album covers. Then he does HPMs on paper—they’re usually an edition of 10– that’s what’s out [in the alley]….” Ultimately,  says Gentile, “The edition number is related to how many times the screen is used for the black image. But the backgrounds are all different.”

And making it all the more unique to DC? The Cat AIDS graffiti painted over the boy soldier’s face. Slap on a logo and maybe it’ll be the next Obey– the line is already everywhere! (Below: corner of 14th and Euclid.) 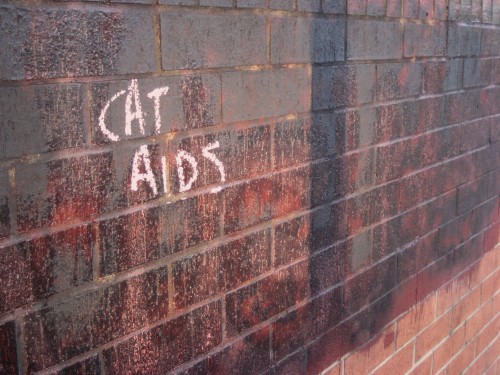 2 thoughts on “The P Street Fairey”