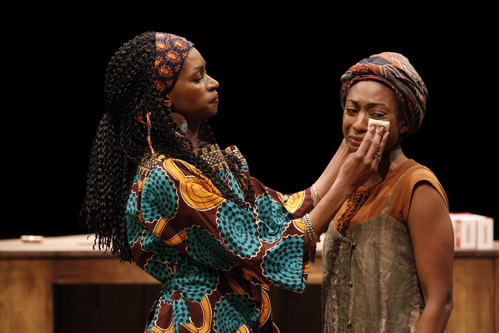 Jenny Jules as Mama Nadi and Rachael Holmes as Sophie in Arena Stage at the Mead Center for American Theater’s production of Ruined April 22-June 5, 2011. Photo by Joan Marcus

There are 683 seats in the Fichandler theater at Arena Stage. The house was packed for Ruined, playwright Lynn Nottage’s 2009 Pulitzer Prize winning play about the atrocities inflicted on women during the Second Congo War (1998-2003). They laughed, they cried, they applauded. They applauded a lot. And then they left. I heard many say “phenomenal” as they exited the theater.

683 seats. In the program, production dramaturg Amrita Mangus notes that “in some villages, as many as 90 percent of the women have been raped.” Eight organizations are listed in the program, including CARE and V-Day, to encourage the audience to act upon what they’ve seen.

I couldn’t help wondering how many audience members would get involved afterwards. There was so much laughter, some of it perhaps nervous, through the first act of the play. So much applause at the end. Would they leave and go back to their comfortable lives, telling others “go see this play!” but not “go get involved!” Would I? There’s a danger with political theater. It allows us to feel involved by the mere act of watching.

Lynn Nottage conducted extensive interviews throughout the Congo with survivors of the brutality of mass rape. Their voices come through authentically in Ruined, and it’s in these moments – especially the monologue by Salima (a riveting Donnetta Lavinia Grays) that opens the second act – that the play is at its most powerful. Nottage also modeled some of the plot on Brecht’s Mother Courage and Her Children, and it’s those moments, especially the meandering first act, where the play is at its least affecting. Part of that is the disparity between an exploration of the moral ambiguity of war, and the utter wrongness of rape and sex slavery. The women in Ruined go from brutal gang rape – including mutilation by bayonet – to sex slavery, prostitution and suicide. When one character proclaims the soldiers will no longer use her body as their battlefield, it’s a profoundly powerful moment made horrifying by her being driven to self-mutilation. But Nottage also imbues the action with music, dancing and humor in an effort to show the survival instinct and desire to be happy can rise above violence. It’s a life-affirming statement that can also be uncomfortable.

After all, the women have been sold into a whorehouse, the last place that will take them after they’ve been raped and their villages refuse to take them back in. Run by the frighteningly practical Mama Nadi (Jenny Jules), Salima and Sophie (Rachael Holmes) join the spirited Josephine (Jamairais Malone) in providing sex to soldiers and local miners. Except Sophie, who can only sing like a caged bird. She’s “ruined,” savaged by gang rape and bayonets. Returning again and again to proclaim his unrequited love for Mama is Christian (Jeremiah W. Birkett), a wartime profiteer with a weakness for alcohol. Mama is a true survivor – and though she may feed and protect her women, she also brutalizes them. When she orders Sophie to pleasure a soldier orally it’s a sickeningly reminder of the evil women can do to each other, even surrounded by men who would do the same.

The characters are trapped in the roles drawn for them by war, and ache to escape to their former bucolic lives. Is it possible after so much brutality to still have hope? To not just survive but to dream and love again? That’s the main argument between Mama and Christian. Jules and Birkett portray their opposition and longing with sensitivity and humor, leading to the inevitable revelation that might unite them. Holmes also does a remarkable job with a role that is essentially a cliche. The moment when she cracks and spits at the dangerous commander and freezes in the realization of what she has done is superb as it brings back the terror of her ordeal. And Grays is the moral heart of the play, submitted to indignity after indignity until she finally cracks.

683 seats. If every person who sees this play is inspired to do something about atrocity against women, then it is worthwhile to see.

Get involved regardless of whether you do.