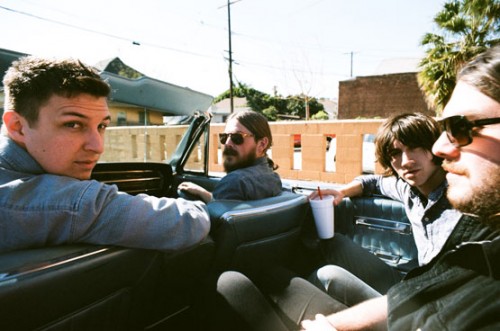 And so with this review of Arctic Monkeys at 9:30 Club on Tuesday night, my time reviewing concerts on We Love DC has come full circle. On December 11, 2009 I posted my first feature review as WLDC’s new music writer. It was a glowing review of Arctic Monkeys’ 9:30 Club performance and their dedication to artistic development in the face of a relatively disinterested audience who just wanted to hear the hits.

The world was a different place then. 9:30 Club tickets were sold via Tickets.com instead of Ticketfly. Osama Bin Laden was still hiding in every shoe, belt buckle, and in-seam instead of resting in a watery grave. I had yet to experience and subsequently declare 2010 ‘the greatest year of live music ever’. And Arctic Monkeys had a huge savings account of mainstream goodwill that they hadn’t yet squandered with their somewhat anti-populist tour.

I don’t know if it is because the quality of 2010’s concerts irreversibly raised my standards or if it is because Arctic Monkeys are currently caving in to popular opinion instead of sticking to their artistic guns, but something about this week’s concert really disappointed me. How this band that has only received rave reviews from me in the past suddenly ended up boring the hell out of me is kind of mystifying. I guess the answer is a combination of both aforementioned reasons.

Essentially this week’s Arctic Monkeys’ concert had the totally opposite feeling and effect of their one in 2009. Where that show featured sonic exploration and artistic growth, this show felt like a tired run through of greatest hits. Where the sold-out crowd in 2009 was in full drunken tune-out mode until the finale, the sold-out crowd on Tuesday night was going bananas the entire time as the band tickled their sweet spot with hit after sing-along hit. Which normal I wouldn’t mind, I mean I love this band top to bottom (well, except for “Fluorescent Adolescent”). I love their hits and I love their misses. I love their odd structures and their classic choruses. I really do. But something about Tuesday’s performance just felt like it was pandering to the crowd in the worst possible way.

I could imagine some seedy talent manager constructing the setlist for them in a shadowy back-room. A setlist guaranteed to “make up” for the 2009 shows that “disappointed” the crowd. Tuesday’s show felt like it was designed to apologize for their previous show and to win back fans who were too ignorant to give this very talented group the slack to spread their artistic wings a year and a half ago. And on Tuesday night, that plan seemed to be working. The problem with it though, is that it felt like a giant step backwards (or at least a mind-numbing holding pattern) artistically for the group. Their 2009 show was a triumph and it was disappointing to see them devolve on Tuesday night.

And you know what? Fuck those fans that demand a band stay frozen in time the minute they record some hits. Those fans want a product they don’t want art. Bands are like sharks, they need to keep moving or they’ll die. If you want to hear the same hit song over and over again played exactly like it sounded on the record; then go listen to the damn record!

Or maybe that isn’t what was happening at all. Maybe that’s just my skewed perception of things. I mean they did play a decent mix of songs from all of their albums and they even played some of the new ones from their forthcoming effort “Suck It and See”. Maybe this is just who the band are now. Kind of boring. Maybe the new album just isn’t as good as “Humbug” was. Maybe the fact that they changed guitars between every single song just killed the flow of their set.

Well strike that; that would mean there was a flow to kill. Seriously, what happened to the showmanship they displayed the previous three times I saw them? Where did all of those expertly crafted three or four song runs go? Tuesday night’s performance had nil flow. Perhaps even negative flow. If that is possible. It was play a song, stop, switch guitars, mumble repetitive banter (“Havin’ a goot time?” X 15), play the next song, repeat ad museum. Play, stop, play of the worst, most boring kind. What happened to these guys? Was it jetlag? DC was the first date of their U.S. tour after all. Were they stoned?

A while ago, I defended Arctic Monkeys when some one said that they were boring performers. Every time I have seen them they have been absolutely electric, I said. Not so on Tuesday night. In fact, I had to resist the urge to go home several times during their set. The play, stop, play thing; the lame banter; the crowd-pleasing political song-choices feel of the whole thing; it was all kind of unbearable and frankly a little sad. Mainly because for all of these legitimate complaints about the show, it will probably be viewed as a raging success by the band and most of the audience.

Oh well, not exactly the way I wanted to book-end my reviews to-date for We Love DC but you can’t win them all. Better luck next time lads.