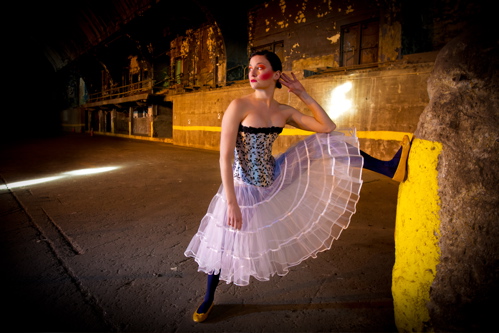 It’s been two days since I’ve seen Swampoodle, the joint production by Irish company The Performance Corporation and DC’s own Solas Nua, a site-specific piece at the historic Uline Arena. I think the warning above that appears on all the press materials needs to be revised as follows:

Joking aside, my allergies are still in an uproar after ninety minutes inside the Uline, and if you suffer from mold allergies, I really do think you should know that it will affect you. But as fellow WLDC author Brian noted earlier, the arena has an amazing history and Swampoodle aims to bring that to life with its promenade style theater experience. It succeeds occasionally with scenes of evocative beauty that take advantage of the arena’s haunting decay.

When the doors roll open and you enter the darkened arena, its majestic demise is both shocking and breathtaking, like a Grecian temple gone to seed. In its heyday the arena could seat some 9,000 people – just glimpses of the bleachers remain as concrete steps in the corners. No wonder it was also at one time called the Washington Coliseum. As your eyes get accustomed to the dark you notice the peeling paint on the immense vaulted ceiling above, as a man in the distance (Michael John Casey as a Greek chorus-style janitor) calls you forward, his voice echoing across the gloom. It’s an impressive sight that will stay with me for a long time.

But as the performance went on and actors raced back and forth shouting about “the show must go on!” and “it’s a wonderful show!” portraying a forced anxiety over the lack of a script, well, I started to turn away from them and look to the Uline itself, its massive decline more evocative than anything else. Perhaps that’s the point, a friend remarked as we walked away afterwards to the gleaming New York Avenue metro, new office buildings and a shining Harris Teeter sprouting up around the dying concrete cavern. Perhaps there’s no point at all.

Swampoodle is the name of the Irish shantytown that existed in the late 19th century whose approximate core is now Union Station and its railroad tracks radiating to the north. The Irish who lived in Swampoodle and helped construct the city were themselves booted out for the construction of the train station. Why the ridiculous name? Nearby Tiber Creek’s flooding. You’ll pick up these snippets of history, plus the fact that Jackson Alley was a dangerous place where cops feared to tread, scattered throughout the performance, as you follow the actors through the arena witnessing various vignettes.

For those not familiar with site-specific theater, Swampoodle was created specifically to be performed in the Uline and therefore this one week run is a unique experience. The Uline is distractingly enormous, swallowing actors’ voices and presences whole like a giant vortex of space and time. I couldn’t stop looking around me. I suspect playwright Tom Swift and director Jo Mangan, both of Ireland’s leading site-specific theatre company, wouldn’t really mind. No one’s experience of this performance will be the same, as not just viewing angles but aural perception is constantly warped by the space.

Scenes veer from startlingly intimate, as when Chris Dinolfo puts on stage makeup as Nureyev, to grandly expansive, like Jason McCool suddenly playing trumpet up high and far away. There’s a riveting moment as the cast wanders about you singing a spooky choral song almost in full darkness. Gorgeous use of black and white projection against the vaulted wall present flickering scenes of the Beatles, creating ghostly presences more real than the actors.

But these moments are fleeting. The majority of the forced action revolves around the play-within-the-play that supposes there is no script and has the actors panicking about how to keep your attention as they try to regroup and start the show. Though the actors are engaging as they race around you, it’s a construct that isn’t essential and seems designed only to allow for the money shot at the very end. By that time, it seems a lengthy joke that just isn’t funny, a forced wink, a fake smile. A friend likened to whole experience to The Aristocrats. It made those brief scenes of beauty more haunting in my memory, as I longed for more surrealism, less attempts at structure. I wanted more ghosts, less reality. Ultimately, though I admire the audacity of The Performance Corporation and Solas Nua in the attempt to perform here, it left me longing for more.

Again, maybe that’s the point of the performance – to highlight the disappointment we all feel when faced with the death of the past. Or, Swampoodle really is a missed opportunity to create a theatrical event completely disengaged from realism.

2 thoughts on “We Love Arts: Swampoodle”