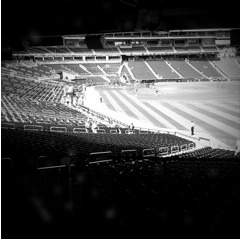 If you set up a script for how to win a baseball game, it would go something like this:

Get good starting pitching that gives you at least six innings and allows less than three runs. Make good defensive plays that keep the other team off the board and line up three quality relievers to shut the other team out at the end of the game.

Oh, and score enough runs to make it all stand up.

The Nats got three out of the four pieces of the equation on Saturday against the Padres. Jordan Zimmermann was solid through six innings, allowing two runs on five hits with a walk and four strikeouts. He threw 100 pitchers to 24 batters and left the game down 2-0. For fielding, Rick Ankiel made two great plays in centerfield to finish both the first and second innings. Jerry Hairston made a great diving stab-and-throw in the third. Zimmermann picked off would-be base runner Eric Patterson (who had just stole second) to end that inning.

But it was two series of plays that haunted the Nats. The first was a triple by Padres’ rookie Blake Tekotte that tied up rightfielder Jayson Werth on the warning track, bouncing off his glove to the fence. Catcher Kyle Phillips singled to score Tekotte on the next at bat. It was a difficult play for Werth but he was under the ball and could have made the catch.

And the Nats never got anything going at the plate. They finished the game with five hits and four walks, three of which came in the second inning. Ian Desmond, Werth and Layne Nix were walked by San Diego starter Tim Stauffer. Up comes Mr. Walk-Off himself, Mike Morse with one out and a great chance to give the Nats some early breathing room.

Now, the one thing that you do not want a batter to do against a wild pitcher is go up there and swing at the first pitch. Make him work, get into trouble and be forced to toss one in the middle of the plate. Yet, there was Morse, hacking away … straight into a double play that ended the inning.

“You know, we got out of the blocks with a good inning there and we really felt great about that inning with the bases loaded with three really good at bats to set it up. He just made a great pitch,” manager Jim Riggleman said. “He is like a couple of other guys, he has got a good sinker and when he gets it where he wants to, he’s got us.”

One of the general rules of baseball with runners in scoring position and a pitcher with control problems – do not swing at his best pitch. The sinker works for Stauffer, let it go by and wait for another.

This is what wins or loses games, two series of plays that swing it the way of the opponent. If we are talking about Win Probability Added, neither Werth nor Morse did the Nats any favors on Saturday afternoon.

Zimmermann was the hard-luck loser, yet again. He is now 2-6 on the year though he lowered his ERA from 3.98 to 3.88 on the afternoon. He may not have been his most dominating self, but any team in the league would take a pitcher who allows only two runs through six innings. Even against the Padres, who are the worst statistical hitting team in the league.

Laynce Nix scored the only run for the Nats on a homerun into the bullpen in the seventh inning to set up at least a semblance of suspense that Washington could walk-off for the second night in a row.

“He is a tough guy, he knows that he pitched good and he knows that he didn’t pitch as good as he could. I think and go in there and ask him he would say that he felt good today but he felt really good in Baltimore,” Riggleman said of Zimmermann’s mindset after a series of close losses. “So, he is a tough guy, he is a strong mentally guy and I don’t have any concerns over his frame of mind.”

The Nats are in a bit of a funk. They have lost eight of their last 10 and without Ryan Zimmermann (and now first baseman Adam LaRoche) there is no power in the lineup outside of Werth, who is still having a big slump of a season. Yet, if Washington could get those two hitters healthy, add another quality bat in the outfield via trade, there are reasons to be optimistic. The fielding shows signs of being better (though still is almost 10 runs below average, via FanGraphs) and the pitching generally keeps them in games. If only they could hit, the Nats could be a 78 to 81 win team. It is a sad state in baseball when you are wishing for a number in the win column that starts with a seven at the end of the season, but so it goes in Nats Land.

If only they could put the pieces together to make it happen.