It’s been a hard season, so far, but nights like Tuesday night are the refuge of the hard-luck fan.

I could take no joy in the lead that the Nationals amassed over the Phillies in the third inning. Given the Nationals’ ability to snatch defeat from the jaws of victory this season, especially over the last few weeks, it was a tough night to watch the team, despite the 10-2 win they amassed. Between the heat, the roving packs of Philly fans, and the lead-but-not-a-lead, this was definitely a night where I popped an extra omeprazole with my half smoke. 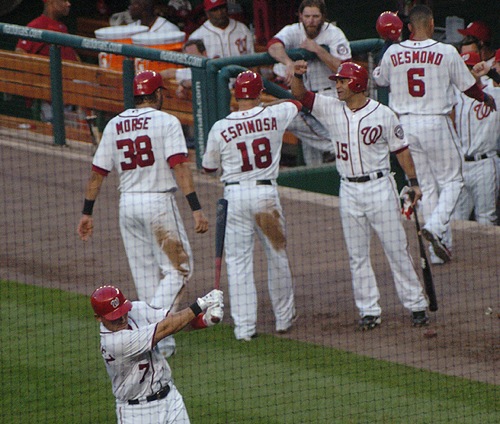 As that lead built, from 5 runs up to 7, the stadium relaxed, and everyone just leaned in to enjoy the rest of the game. Jason Marquis went six and a third for his 7th quality start in 11 appearances, picking up the win, his sixth.  Danny Espinosa launched his 9th and 10th home runs of the year, tying him for the rookie lead.  After the game, Riggleman said of Espinosa, “He’s going to be a tremendous player.”  Asked about his potential as a #5 hitter, “It’ll depend on how well his bat comes along left-handed.”

Mike Morse had a superb evening, going 3-5 with a pair of RBI, and got good wood on the ball in all five of his at-bats, something Riggleman attributed to Morse’s work with Rick Eckstein. It was nice to see Eckstein get a positive mention in a week where he’s been unavailable for media comment due to the team’s lackluster plate performance.  The work he’s done with Espinosa and Morse has paid off, of late, with Morse having just about the best month he’s had in his career, and Espinosa has out-hit Albert Pujols this season.

Tonight, Cliff Lee was eminently human, much as Roy Halladay was on Monday afternoon. I suppose that makes the whole season so far all the more frustrating.  If the Nationals can render vincible the best one-two combo that MLB has to offer, but still be last in their division, despite a vastly improved defense and starting pitching, there are few options for the fan. You can point at Riggleman, and many are, or you can point at Rick Eckstein, and many are, and those are valid points.

Riggleman’s reliance on Matt Stairs in high-leverage situations is absolutely unfounded by any statistical analysis I can unearth, and the bunting has gotten to be an epidemic, albeit one that occasionally has merit. Eckstein’s role is certainly more murky, and given the success that he’s had with Michael Morse this May, certainly subject to the question, “Is it just that no one’s listening to him?”

We’ll talk more about the flip side of that question on Thursday when we preview the upcoming 11-day roadtrip to the NL West, because yes, Virginia, there are many perfectly good reasons to keep Jim Riggleman and Rick Eckstein right where they are, at least through the All-Star Break, and probably through 2011.