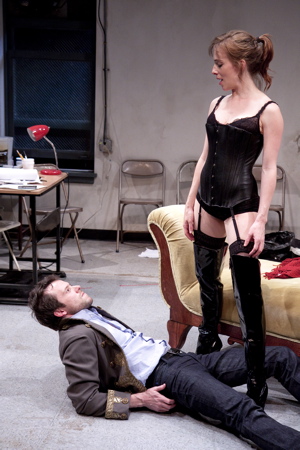 The night I saw Venus in Fur, I had strange dreams. Given that the play is inspired by the infamous 1870’s novel that gave birth to the term sado-masochism, I’ll forgive you if your first thought was that my dreams were a dizzying melange of whips, dog collars and PVC boots. After all, Studio Theatre’s press teaser quotes the New York Times as saying this is “90 minutes of good, kinky fun.” However, David Ives’ remarkable play is more than a romp through a fetish wonderland. In its fast burning build-up to the final electrifying minute, it’s the embodiment of that haunting line from Yeats, about a “terrible beauty” being born.

Leopold von Sacher-Masoch’s book Venus in Furs supposes that behind every fetish there’s an “innocent incident,” something almost innocuous in the past that marked us on a primal level. For his protagonist, Severin Kushemski, it’s his childhood punishment by an imperious aunt as he writhes under her whip on her cast-off fur cape. As an adult, he will seek subjugation at the hands of his lover, Vanda Dunayev. We don’t know what the “innocent incident” is that drives David Ives’ protagonist, a playwright directing his own adaptation of Sacher-Masoch’s novel, but we know from the first minute that he’s an arrogant misogynist just begging for a beating. Something is slouching towards his Bethlehem, all right, coming to take vengeance, but he’s oblivious to the danger until it’s too late.

At the end of a long day of auditioning to cast his own adaptation of Venus in Furs, Thomas (Christian Conn) is unloading his frustration over the phone about the paucity of truly sensual, powerful women to play his Vanda. It’s the kind of tirade an old-school Hollywood producer might have made, peppered with insulting assumptions made all the more comical by the fact that the shabby surroundings clearly indicate he’s not a power player. Describing strings of annoying actresses dressed as hookers, dragging bags of props, with voices that sound like “six-year-olds on helium,” he’s surprised when one last supplicant (Erica Sullivan) barges in from the rain with an obscenity-laced plea for an audition.

She’s exactly everything he’s just described. But he’s too blind to see the warning in that eerie similarity. And so begins a riveting game of domination and submission. By the end, Ives reveals in a shocking moment of divine retribution that the dice were loaded all along. 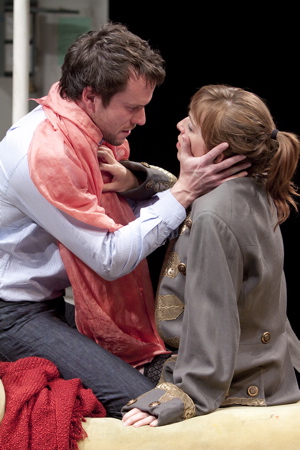 So much of the thrill of that power game lies in the two actors, onstage for ninety unbroken minutes of relentless tension build. As Thomas, Conn presents a man with a carefully constructed shell, self-contained in a cage of his own making with a perfect future wife and life that he secretly despises. His self-loathing and doubt are the keys to defeating him, and Sullivan’s Vanda plays them like a virtuoso. Sullivan is simply amazing, her performance taking her from kooky desperation to cool aristocratic composure to alluring goddess in rapid turns. David Muse’s direction makes this dance between them all the more effective by keeping the painful tension twisting ever higher – no mean feat for ninety minutes of two actors on a small thrust stage with little else. That stripped-down sensible set design by Blythe R. D. Quinlan, matched with initial garish lighting by Michael Lincoln, seems to magically evaporate as the characters delve into the action of the play-within-a-play.

There’s so much depth in this short play. It can be enjoyed as a highly theatrical comedy, as a treatise on the tangled web of gender politics (echoes of Mamet’s Oleanna or Muller’s Quartet), with references to poetry and philosophy and paganism. I wish I could describe the immense intensity of that final moment, but that would be ruining your own anticipation, and it’s so sublime not knowing what will happen next. We once believed in beings who burned us if we got too close to that knowledge, or if we dared to insult them.

Or, simply because they wanted to.