Summer is a time for re-runs and apparently that goes for protest events too. Adam Kokesh and others have indicated their intention to show up at the Jefferson Memorial this Saturday at Noon for a repeat performance of last Saturday’s civil disobedience. There’s over 2500 folks RSVPed on Facebook, though that seems to include folks who are going to boogie remotely in solidarity.

I already weighed in with my opinion on how I thought the protesters should have responded during their arrest and a number of you weighed in with your position on me getting stuffed. I thought a more useful follow-up would be from someone with actual law knowledge so I reached out to Kevin M. Goldberg who has helped us out with speech law before.

Kevin is Special Counsel at Fletcher, Heald & Hildreth where his area of expertise is First Amendment, FOIA and IP issues, making him a good person to turn to about this. Plus he still takes my calls. He’s also a regular contributor to their CommLawBlog where you can find items like his recent piece about “copyright trolls” and the BitTorrenters who don’t so much love them. If you’re getting your Gaga or Hangover 2 fix via less-than-legit channels this might be the kind of thing you’re interested in reading about.

For the moment, though, let’s talk about doing the monument boogie. Take it away, Kevin.

Don first contacted me Sunday evening with the idea of a guest piece about the Oberwetter decision. That’s Oberwetter v. Hilliard, the case that Adam Kokesh and the other protestors were responding to when they had their Jefferson dance-in this weekend. His suggestion for a primary focus was the subject of that case’s odd-sounding finding: That the inside of the Jefferson Monument is not a public forum.

This isn’t a the first time Don and I have discussed this subject. I teach Journalism Law at George Mason University and talking about when, where, and how the government can and cannot legitimately restrict your speech gets sizable attention in my lesson plan. Not that long ago Don audited my class to make sure We Love DC can try to enjoy a long and lawsuit free existence. Ever since he’s been contacting me as his “expert” on speech law. (Note to self: update email filters)

This event was no exception and we exchanged a few emails about the details of the Oberwetter case and this more recent event. While I can assure you that nothing would make me happier than to show Mr. Whiteside up both publicly and violently, I have to say that I can’t. We’re in total agreement here on two counts: (a) it’s unfortunate that (b) the Court of Appeals probably got this right.

How can that be when anyone’s free to walk into the memorial any time of night or day? How do two people slightly left of Marx on speech rights come to a conclusion like that one? Well, let’s discuss. There are two reasons I will always love DC, the city that has been my home for pretty much my entire life. First, there’s the monuments. I’ve always said that I’ll know I’m ready to leave this place when the ability to drive down 7th at night, see an illuminated Washington Monument to my left and Capitol to my right, doesn’t give me a rush. Second — and I’m certain this played into my love of and career choice involving free speech — are the crazy ass protesters. New York doesn’t have them, Los Angeles doesn’t have them, even Las Vegas doesn’t have them. Peoria certainly doesn’t have them. Not like we have them. Anyone with a beef and a sign seems drawn to this place. Why? For the same reason the monuments are here, not in New York, Los Angeles, Las Vegas or Peoria. Because this is the center of both government (literally) and freedom (symbolically).

So it’s logical that even my two favorite parts of DC will eventually come into conflict. You want to get the President’s attention but can’t get into the White House? Maybe he’ll see you if you sit outside long enough. Don’t have the state bar membership and two members of the Supreme Court bar to sponsor you so you can argue a case before the highest court in the land? Well, maybe a really well-worded sign might sway a Justice or two. And suppose you really, really love Thomas Jefferson and want to feel very connected to him on his 265th birthday? Hey, sometimes a girl’s gotta dance.

Dancing inside the Jefferson Memorial is, of course, what got Mary Brooke Oberwetter and several others in trouble just before April 13, 2008. It’s also what got several people arrested this past weekend while engaging in civil disobedience.

But why is it illegal? How can it even be illegal? How could the court call this location – where the public is always welcome – a nonpublic forum? Surely the initial arrest was a mistake, you say. Surely both court rulings were flagrant violations of the First Amendment, you cry!

First of all: Don’t call me Shirley. Second… not so much. Despite the absolutist phrasing of the First Amendment (“Congress shall make no law”), it’s probably more apt to think of your First Amendment rights in terms of a sliding scale, albeit one where the scale tends to be tilted in favor of free speech. Even when your rights are strongest they can still be restricted; even when the government’s interests are at their peak, you still have rights. Nowhere is the sliding scale more apparent then when an individual or group is trying to express itself in public.

As the United States Court of Appeals for the District of Columbia Circuit (generally referred to as the “second highest court in the land”) noted in Oberwetter v. Hilliard, government owned or controlled spaces fall into three general categories:

‘Contemplation of Justice’
courtesy of ‘kimberlyfaye’

Where people often get confused when thinking about these concepts is that they equate “open” with “public”. The physical character of a given location may be a factor in determining whether something a forum is public or private, but it’s not determinative. Instead of asking whether the public can enter a space, ask whether the public traditionally and appropriately has used that space to fully express themselves. Is the hallway in a public courthouse right outside where civil trials are going on really the place you expect to find folks passing out leaflets about how American Idol is rigged?

This question of appropriate use is most often raised when you’re trying to decide whether the space in question is a “traditional public forum.” Another way to think about it might be to ask whether the expressive activity in question is consistent with the normal functioning of the property.

Truly, the Jefferson Memorial is a hard one. I may quarrel with other aspects of the Court’s ruling – did these dancers rights need to be restricted when they were clearly not drawing the attention of, distracting, or certainly bothering anyone? Was their silent, basically motionless dancing any different than if I and 15 friends randomly chose spots in the rotunda and silently read individual copies of the Declaration of Independence to ourselves? But I really can’t say that calling the inside of the Jefferson Memorial a nonpublic forum is inconsistent with other cases, including:

The grassy area on the West side of the Capitol has clearly been open to the public for various events.

New York’s Central Park. The Supreme Court clearly indicated that this is a traditional public forum when it allowed the city to limit the maximum volume of a issues-oriented rock concert. A strict decibel limit is a permitted “time, place or manner restriction” that is not based on the content of the speech in question.

Chicago’s Grant Park was also deemed to be a public forum in the context of a case where the Court allowed the city to require an even-handed permitting process for large group demonstrations or gatherings.

The sidewalk in front of a United States Post Office, while open to the public, was open as a thoroughfare from parking lot to building and has not traditionally been viewed as an area for expressive activity.

The side of public buses — and, later, Metro – which do not have to accept all advertisements on an evenhanded basis.

Airport terminals, even pre-security, are not traditionally used for public purposes.

Perhaps the area in front of the Supreme Court provides the best analogy. It was deemed to be a public forum largely because no indication of a boundary was ever given to those wishing to utilize the space. However, as we know, the Supreme Court has since come back and indicated that the steps and marble front “plaza” are off limits. In other words, it designated an area as public and an area as private, clearly delineating that, while the public may walk there, it may not demonstrate there.

When compared to those other cases, it seems pretty clear that the government has drawn a boundary through use of clear signs that reinforce the physical boundaries of the columns themselves. But it would seem rather certain that expressive activity could occur on the grounds of the Memorial (though I could see the government arguing that the grounds are a limited purpose public forum, but if it makes you feel any better, East Potomac Park would clearly be a traditional public forum).

And what of other monuments? Well, they’d fall in line pretty quickly. Clearly the area in front of the Lincoln Memorial has been used — famously so — for expressive activity. But I don’t think we can expect a real life version of Abe Lincoln’s Big Gay Dance Party under cover of his marble palace anytime soon. 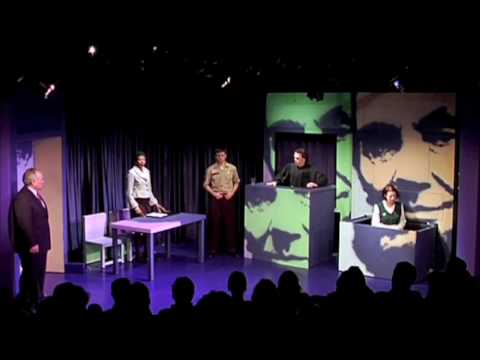 5 thoughts on “Legal Analysis on the Jefferson Dance Restrictions”