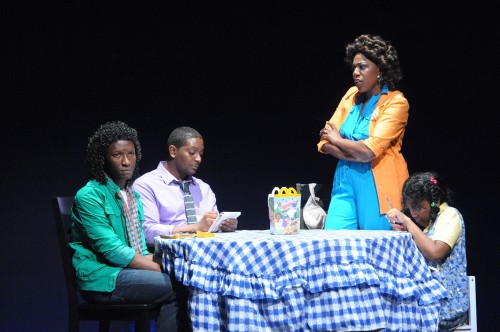 Bootycandy playwright Robert O’Hara breaks it down in a vignette in the middle of the show entitled, “Conference”. The skit presents a moderator questioning the four “playwrights” that wrote the previously presented vignettes in the show. The moderator cross-examines each author, trying to pigeon hole his or her work into his stereotype. The illustration is a  meta-point in the play that a statement that this piece provokes more than placates:

Moderator (to Playwright): What would you like the audience to take-away after seeing this show?

Playwright 2: After you choke and struggle, what goes down your throat isn’t easy- you know that it’s there.

O’Hara acknowledges that what you are witnessing may not be comfortable at times. Woolly Mammoth Theatre’s Bootycandy is like an Atomic Warhead Candy turned inside out.  The series of 10 short plays start out sweet, funny, and entertaining but the show will have moments that will make you pucker as a complex portrait of the author is created through exploration of various issues including sex, family, and homo-phobia.

Robert O’Hara earned critical acclaim last year when he went home with the 2010 Helen Hayes award for Outstanding New Play for Antebellum. After Woolly announced that they would be producing the World Premiere of O’Hara’s Bootycandy, the author spent the past year writing and re-writing the script to give the piece a stronger overall theme.

The show has bills itself as a, “kaleidoscope of sassy lessons in sex education speaks the truth about growing up gay and African American.” There has been a big push to target DC’s gay community, with media partnerships with Metro Weekly and integrated programming tied to Capital Pride.

There’s nothing sex ed about Bootycandy. There’s no poking fun at awkward sixth grade health classes, the play is much, much more than that. Bootycandy is a moving series of vignettes that borrows from the writer’s life growing up as a black gay, playwright. It is both sweet and bitter, a show that could be split into two parts: hilarious sketches of characters that include an outspoken reverend who defends homosexuality amongst his parishioners, a mother who names her daughter Genitalia, and a man who goes by Sutter that appears to be O’Hara’s alter ego. As you get deeper and deeper into the rabbit hole, the show doesn’t hold any punches in revealing O’Hara’s experiences and feelings growing up gay.

O’Hara pushes the envelope and isn’t afraid to bring up any topic in his exploration. There is also a brief moment of nudity in the show when an actor proves that he can, “bring it to the table.” The author strikes a fine balance between evoking a response and going over the top- as surreal and astonishing some of the situations are it manages to be deeply grounded for the audience.

The five-person ensemble keep the show going with quick wit as well as quick costume changes, never letting the show stop for a single beat. The group of Jessica Frances Dukes, Phillip James Brannon, Sean Meehan, Laiona Michelle, and Lance Coadie Williams all have their moments however Brannon’s performance as Sutter must be highlighted. As O’Hara’s alter ego Brannon hits an entire range of emotions that brings him from laughter to literal tears.

So it doesn’t matter if you love her, him, or both- you will truly enjoy what O’Hara has to offer. Bootycandy marks the end of the theatre’s 31st season and they managed to do so with a huge, glittery, tumultuous bang. After reviewing about half of Woolly’s shows this past season- this has been the best one yet.