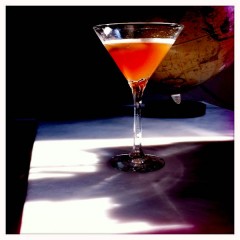 On a hot late-afternoon this week, just settling down at the long, cool, marble bar in (very air conditioned) Blackbyrd Warehouse was a pleasure. Having a tasty, interesting drink to sip on made it even better.

Blackbyrd Warehouse opened last week to a fair amount of buzz – without even doing too much to promote. Everybody in town had been eagerly awaiting the new Hilton Brothers project for over a year, though several considerable delays and even concept changes. At one point in the process, Blackbyrd was seen as an all-day place, more like Tryst, with a specialty coffee program for day time, transitioning to more of a nightspot in the evening. As it has been realized, though, it is primarily a lounge with a seafood-focused menu of dinner options. (As with American Ice Company and Patty Boom Boom, with whom Blackbyrd shares owners, food is principally prepared in the kitchen at Marvin, next door.)

The upstairs lounge space has high ceilings and Edison bulbs everywhere you look. Around the walls of the space, crown molding creates a shelf for 45 records, each with an exposed Edison bulb in front of it. High on one wall is a projection screen which, on my most recent visit, was silently showing a Hong Kong action movie. The downstairs looks a little more like American Ice Co, with exposed metal and wood, upstairs is a little more like its other sister The Gibson, with leather couches suitable for groups and dark bent-wood barstools at that white marble bar, but lighter and airier than both, throughout.

Cocktail menus are still being tweaked to compliment the list of wines and beers presented when one sits down. I was happy to help bartender Ryan Kibler by taste-testing a few “experimental” recipes he was finessing. The Blackbyrd Martini was totally solid – adding dry sherry to a gin martini for a subtle variation. They will be serving classics too – for summer, offering their versions of French 75s and Suffering Bastards. Of the things I sampled, I was most intrigued by the De La Sour.

Prominently displayed behind the bar were several bottles of Plymouth Sloe Gin, a slightly more unusual ingredient for the average bar and one which I particularly like. I asked Ryan what he was making with it and he surprised me by saying it figured into a couple of Blackbyrd’s featured signature recipes. One of them is served downstairs as part of a short list of “oyster shooters” – a raw oyster to slurp, accompanied by a shooter cocktail paired to go with it – but for me he put together the De La Sour, which combines the sloe gin with fresh lime, cinnamon spice syrup, and a twelve year old aged rum.

From the moment the cocktail glass approaches my nose, the rich, rum aroma is intense and amazing. However, taking a sip, the taste is unlike the sweet tiki drinks I have been having my share of lately. The lime and berry flavors from the gin are the only fruit elements and the flavor is more deep and complex. It leaves a just slightly astringent quality in the mouth. It is both accessible and a little bit sexy – reminding me particularly of the languid waning days when late-summer slinks into early-fall, more so than the direct sunshine and intense heat of mid-July from which I sought refuge.