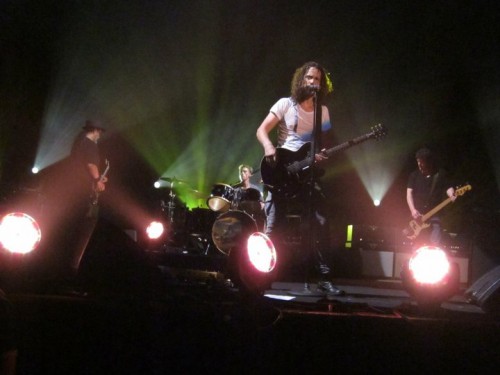 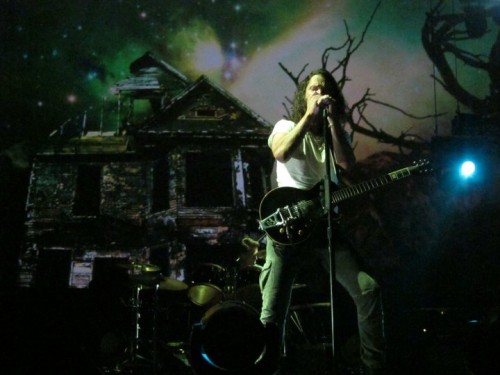 Anyway, to say that I was excited to see Soundgarden live again after all these years is a supreme understatement. That excitement was only compounded ten-fold after I got the opportunity to see lead-singer Chris Cornell on his solo “Songbook” tour earlier this spring at Sixth & I. (Read my review of that show here.) So, I got tickets for both the Philadelphia and DC dates of their tour. I had a strong feeling this was going to be epic, and also they announced the Philly show before the DC one, so there was no way I was missing my chance to see them, even if I had to drive a few hours for the pleasure.

First and foremost, the Patriot Center show. For this one I was able to score fan-club tickets, which allowed me advanced entry into the arena. So, I made the early trek and got into the Patriot Center by 5:30. While the drag of this meant that I had to hang out on the floor of the venue for 2 hours before the show started, it turned out to be so worth it! I scored a spot on the rail, front row, center. Elation, I tell you!

The Mars Volta opened the show, and I won’t go into much about their set. While it is clear they are talented, and there were some sonically interesting moments, their set was not exactly high energy. It felt like a big jam session, more fit to take place in a dark, smoky setting than the big space we were in. Frontman Cedric Bixler-Zavala tried out all kinds of rock antics, but they fell a little flat. They didn’t really seem to go with the music that was playing, he was kind of just out there on his own, contorting, gyrating, throwing the mic stand, and trying to swallow his microphone. It was a little disjointed. I couldn’t help but wonder what they (or at least he) had smoked before coming on stage, and how maybe if the audience had had some too they would’ve
been more receptive. 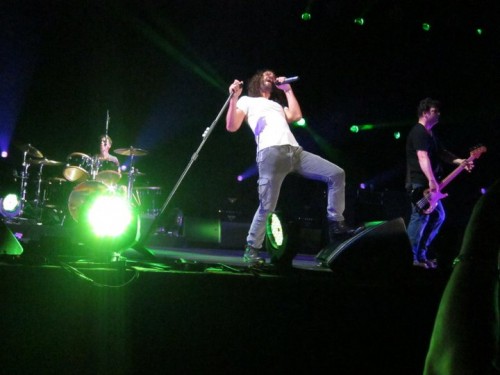 Finally, the moment we all had been waiting for (for 13 years or more). The stage darkened, and music began coming out of the speakers. First droning guitar, and then a recorded voice said “This…is my good eye…do you hear a cow?” (insert “moo” here).  This was the grown-up “See & Say” at the beginning of their hard-driving song “Searching With My Good Eye Closed” from their third album Badmotorfinger. The band entered the stage to an ocean of applause and charged into the song full-throttle. (I lost it here for the first of many times in the night, headbanging and screaming like I was in middle-school again. I was not the only one.) It was an amazing opener to their show that set a charging pace.

From there they tore right into their hit “Spoonman.” (It is worth mentioning that to my relief, the audience had matured somewhat since my last time seeing Soundgarden at the Patriot Center. This would be when I was in high school. At that show I was also up against the front rail, but was nearly squished to bits by moshers, and in constant fear of crowdsurfers. I left that show with bruises corresponding to the metal pattern of the guard rail. In this show I didn’t get pummeled once, and didn’t see any *!$%* crowdsurfers either.) 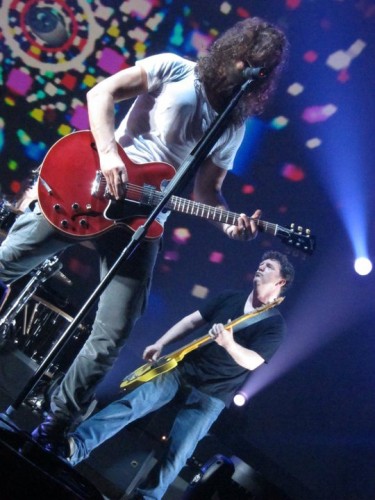 The band was in fine form. Drummer Matt Cameron, (whose full-time gig for the past decade has been as the drummer for fellow Seattle sound rockers Pearl Jam) is a beast on the drums. He is relentless and creative in his beats, and drove the show with nonstop momentum. Frontman Chris Cornell let the audience know early in the set that while the band is working on a new album they were dedicating this night to their extensive back-catalogue. No one was disappointed in this revelation.

They soared and rocked through an amazing 2+ hour set, filled with some of the best of their five studio albums. Kim Thayil, whom I consider a rock-guitar God, owned his instrument, whether crunching heavy chords or flying into the outer space of feedback. The helicopter-like chopping of “Jesus Christ Pose” and the heavy, driving chords of “Outshined” sent waves of energy into the audience like nuclear fallout. Ben Shephard was clearly in his element, striding and pacing the stage like a panther, armed with his bass as his arsenal. 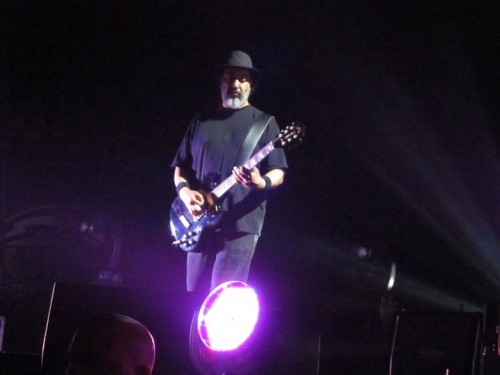 Chris Cornell’s voice completed the package, bringing it all to the highest plane. He is amazing. It merits mentioning that his vocal range is between 4 and 5 octaves. But that is just the beginning. He has such control over his voice, going from the deep, dark moments in “Fourth of July” and “Room a Thousand Years Wide” to guttural growling in “Slaves and Bulldozers” to the highest, gut-wrenching wails of “The Day I Tried To Live”, “Face Pollution” and so much in between.  Oh, and he also plays a fierce guitar, adding layers and even concurrent solos alongside Thayil, giving him a run for his money. Some other shining moments along the way- the soulful “Burden In My Hand”, the power-charged “Loud Love”, and the psychedelic daydream “Black Hole Sun.” 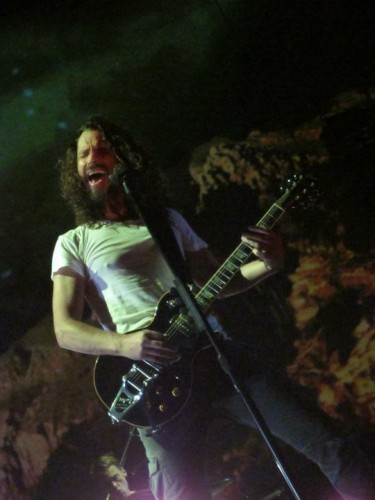 The most awesome part of it all for me though, was seeing the band onstage clearly enjoying themselves so much. Kim Thayil, despite looking tough and imposing, kept cracking smiles throughout the set. They all did. They looked like it was almost as much fun playing for us as it was to be a part of the audience. They closed the set with a five-song encore and left the audience fulfilled, but still wanting more. 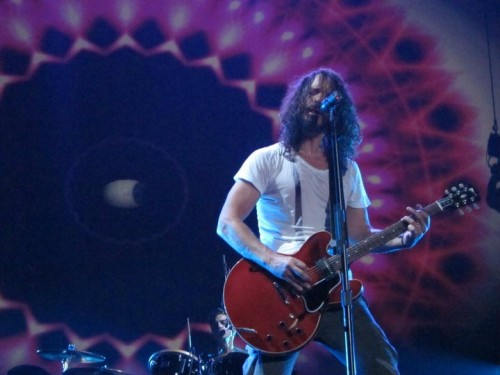 So, I didn’t have to wait long to get more. I drove to Philly the next day to see Soundgarden at Festival Pier at Penn’s Landing, an outdoor venue on the water. I will keep this part short. The show, while amazing and as power-charged as the show the previous night at the Patriot Center, was almost identical so far as the setlist. While it was great for me to hear the songs I loved again, I did long to hear some other of the great ones from their vast catalogue. The only addition to the set-list was the psychedelic, power-packed “Pretty Noose”, off of their 1996 album “Down On the Upside.” They actually played a few songs less at the Philly show.

The main difference in the Philly show was the crowd. Where the Patriot Center crowd was matured to the point of personal space, Philly was still suspended in 1996. I was basically in warrior pose the whole show. The moment the first drones of guitar began for “Searching With My Good Eye Closed” (the opening song again) the crowd surged forward and turned into a mixing bowl of arms, legs, sweaty jabbing elbows, and yes, !#$ #$%* crowdsurfers. While it was exhilarating to be momentarily transported back to my teen years, it was also a pain in the a** to have to keep fighting to stay standing, and not get smashed in the crowd-turned-meat-grinder.

I’m glad I went to both shows, and both had their high points, but the Patriot Center show won the prize for me.