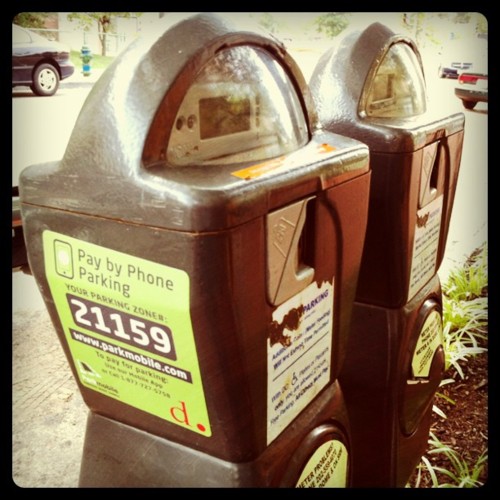 When it was announced earlier this year that DDOT would be accepting mobile payments through Parkmobile, I was pretty excited. I spend a lot of my time driving around DC, and while I was often parking on the street, I was often stopping at the bank  for a couple rolls of quarters.  By the end of the week, when I was running out, I’d often ration my quarters and find myself the winner of a shiny blue parking ticket from DCDPW.

Parkmobile picked up a pair of zones in the early pilot programs in neighborhoods that I found myself in regularly, and I was primarily using their call-in service to handle my parking. When they went citywide, I downloaded their iPhone app, which was both great, and not-so-great all at once.

The mobile app has its moments, and it seems to function just as well as the phone interface with one seriously big problem: it’s a modal dialog hell.  To add parking time in a new zone, you go through about three different interfaces, and make it four if you have two cars on your account, which seems like a lot of needless moving around. 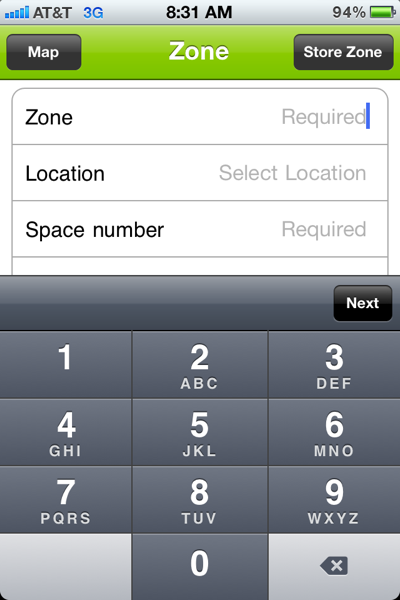 The main interface for Parkmobile, the first of three screens you need to do data entry for in order to park.

More maddening is the interface that’s prominently identified as “Maps”. It’s possible this interface works in other cities, but in DC it is absolutely useless. The way I would imagine this to function is that it clearly identifies each zone so that you can just tap on the pin in the map to start a parking session. Each parking zone is about a block long, so it’s possible that the sheer number of pins might not be possible in iOS, but to advertise a Map in your application, it’s got to actually do something more than be a map. It’s got to have some sort usefulness, perhaps in other cities, or it wouldn’t have made it out of the AppStore, which leads me to my other question. 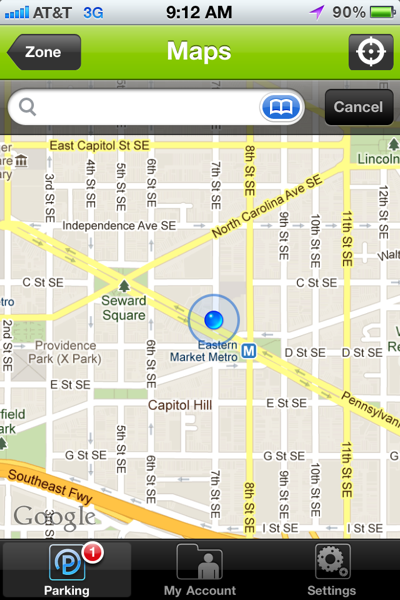 The Maps interface, which doesn’t seem to actually do anything.

With ParkMobile, you setup direct charging from your credit card, either through a call to their call-center or by adding a credit card directly through the application. I had thought that in-app purchases would be processed through Apple’s payments facility, and thus through your iTunes account, but that appears to not be the case with the ParkMobile app. I’m not exactly sure how they bypass that part of things, since I’m fairly sure that the iOS guidelines say that you can’t do it this way. I could be wrong, though. It would be great, though, to have this available as an iOS-based purchase, even though I suspect that Parkmobile would have to tack on a fee larger than their current $0.32/transaction fee.

Of course, there’s another part to consider here: what happens when the DCDPW meter-reader ignores your valid parking session and gives you a ticket for not feeding the meter? Parkmobile support will fight the ticket on your behalf, but they’re running a serious support shortage right now, which can mean a long delay before they fix your ticket. I submitted a request on July 26th that is still outstanding, and may not be resolved before the fine is doubled. Fear not, though, they promise to resolve it no matter the increasing fines. I’m not sure how that’ll affect something like getting booted, though.

The bottom line on the Parkmobile app is: It works, it’s functional, but it has a long, long way to go before it’s going to be something I’m happy to be using, especially given the per-transaction costs.

2 thoughts on “Parkmobile’s Parking App: Not so bad, but not great”