We’re changing it up a little this week from the usual concert ticket giveaway. This week we’re happy to be sending you and a victim friend to see the very last Cherry Red show ever on the 27th: The Aristocrats.

Yes, those are wangs. This should tell you something about what to expect here. 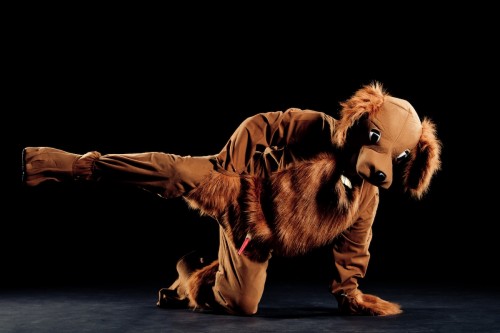 Melissa-Leigh Bustamante as the Dog in The Aristocrats. Photos by Stacey Blomstom

The subheading for the show is “The dirtiest joke of all time is about to get fucked in the ass.” If you caught the documentary about this joke back in 2005 you know it’s a vehicle for comedians to attempt to one-up each other in spinning a convoluted and off-color story.

The only surprising thing is that it took this long for Cherry Red to say back to the world “oh, you think you know raunchy? C’mere sweetie, let’s talk for a second and I’ll tell you how it’s done.”

This is going to be Cherry Red’s swan song. 16 years after they started helping make DC’s theater scene weirder Cherry Red is officially hanging up their hat. It seems like everybody they’ve ever worked with will be a part of this messy sendoff – the press release warns that, as the FORTY-ONE different actors perform the play, things “will be a big mess. We’ll try to keep it on the stage, but, just in case… Please dress appropriately.”

Over the years Cherry Red put on productions with titles like Poona the Fuckdog and Other Plays for Children, Cannibal Cheerleaders on Crack, Spamlet, and a few times they’ve done Day-Old Plays: short works written, rehearsed and produced in a 24-hour period. Sort of the stage version of the 48 Hour Film Project but with more male nudity and mimed buttsex.

Aside – I once commented to my friend Kate, who has been in many a Cherry Red production and who has a credit on The Aristocrats, that I was going to be sure to get to a show early enough so I wouldn’t be sitting in the very first row. It was a typically small black-box theater and while I’m not put off by the male member I didn’t necessarily want to have one swing right by my nose. “Well, I assume there’s male nudity, it being a Cherry Red show and all.” Kate looked thoughtful and said something along the lines of “Well, I don’t know for sure there is. But I’m not sure Ian sees the point of a production that doesn’t have at least one person get naked.”

If there were other people doing things as out-there as Cherry Red when I arrived in town in 2002, well, I wasn’t aware of them. Now it feels like there’s a lot more avenues for folks with big (potentially perverted and filthy) dreams and small budgets to put on a show. We’ve got Fringe annually and small companies like Landless, Pinky Swear, Taffety Punk and more doing their thing year-round. Landless identifies Cherry Red as a inspiration.

So, if you’re not afraid of a little mess and genitalia – okay, probably a lot of genitalia – and are willing to embrace the grand guiginol asthetic if it was channeled by Tourettes-afflicted hillbilly methheads, enter the ticket giveaway below. If you’re not the lucky winner you can go to the above link and buy a ticket knowing it’s for a good cause – Cherry Red is donating the proceeds to the DC Arts Center.

Tickets are for the 11pm show – as we said, it’s the LAST Cherry Red show – and will be in the Warehouse Theater at 645 New York Ave NW on August 27th

For your chance to win these tickets simply leave a comment on this post using a valid email address between 9am and 4pm today. One entry per email address, please. If today doesn’t turn out to be your lucky day you’d better buy a seat: this is it, buck-o.

Comments will be closed at 4pm and a winner will be randomly selected. The winner will be notified by email. The winner must respond to our email in 24 hours or they will forfeit their tickets and we will pick another winner. Tickets will be available to the winner at the door the night of the show; be prepared to show ID.

18 thoughts on “The Winning Ticket: Cherry Red’s THE ARISTOCRATS”