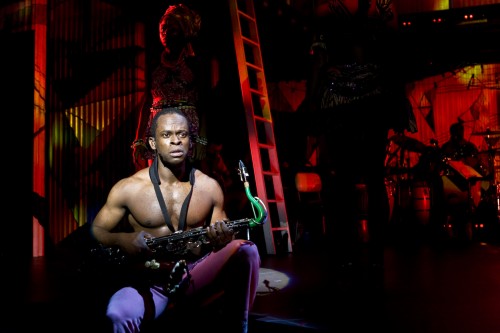 Inside the club we find Fela (Sahr Ngaujah), a man who knows how to belt out a tune and how to play an instrument or two. Using the premise of Fela’s last performance at The Shrine, we are transported through various scenes of his life including his time in America, his rise as a musician, activist, and leader; and the destruction of the Kalakuta Republic, his private compound/artistic commune.

Ngaujah handles the role of Fela with the same energy, charm, and intensity that earned him accolades on Broadway. He acts almost as an emcee for the night, giving the show a concert-like format. Be prepared to stand-up, sing, and dance along with Fela and his ensemble of merry dancers. They are certainly more talented in the steps department but the atmosphere Ngaujah creates makes you want to try regardless of ability.

Bill T. Jones’ choreography is some of the best I’ve seen and has a raw quality to it. The tempo is frenetic and the women know how to bring the boys to the yard with all the booty shaking on display. It’s as if somebody mashed-up a National Geographic documentary with a Hip-Hop video. The lighting and A/V goes above and beyond with elaborate pattern effects and a creepy “Holo Mom” that steals any scene concerning Fela’s late mother Funmilayo (Melanie Marshall).

However the show isn’t exactly one big party. The first act is a happy oasis of song and dance but the show struggles to maintain that energy in the second half. Clocking in a 3 hours, you really feel the time go by after the intermission- where the story focuses more on Kuti’s clash with the Nigerian government. The show’s peak, a number  where Fela goes on a vision quest for his mother’s blessing, puts on the brakes to the music-fest and quickly sobers the audience in a way that’s not necessarily good.

Fela’s Nigerian accent also makes it hard to understand every lyric and line in the show- however the production was smart enough to caption the musical numbers to ensure the audience understands the poetry of Kuti’s melodies.

Regardless of the show’s flaws, producers Shawn “Jay-Z” Carter, Will Smith, and Jada Pinkett Smith have created a musical that approaches the life of Fela Anikulapo-Kuti and celebrates it without going down the traditional biopic route. Don’t get too hung up on understanding the plot- just sit back and enjoy the impressive array of Afrobeat music and dance.