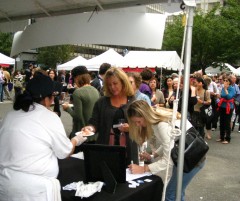 It was easy to take a virtual voyage to Latin locales when I was invited by the festival organizers to attend last Sunday’s “Vintage Crystal: A Taste of Wine and Jazz” in Crystal City. Tasty bites from neighborhood purveyors were pleasantly paired with over thirty wines of Spain, Chile, and Argentina provided by Jaleo.

Local businesses promoted their services with friendly staff and colorful brochures, while Latin jazz from Trio Caliente set a soulful soundtrack for friends to deliberate the merits of Malbec, Carmenere, Verdejo, and Tempranillo. It was impossible to stand still, so it’s a good thing Arlington’s Latin lounge The Salsa Room was on hand to orchestrate rumba, salsa, and cha-cha lessons. Fortunately, overcast skies didn’t detract crowds; in fact, the soft glow and slight chill made for a refreshing climate to hit the dance floors.

“We are regulars at The Salsa Room, so we saw the event on their mailing list and had to come,” said Sarah and Vanessa from Fredricksburg, VA, who were indicative of some of the smiling faces in the crowd. They were big fans of the event’s easy flow, noting that “The whole set-up is nice. We can walk the whole area and not feel overcrowded. It’s easy to relax and just enjoy the moment.”

Asked about their favorite food offerings, both were quick to share: “The chocolate sin cake!” That cake being a gluten-free chocolate-espresso flavor bomb topped with fresh raspberry sauce, served up by Ruth’s Chris Steak House. Not to be outdone, another steak house, Morton’s, grilled up beef tenderloin mini-sandwiches that were worthy of the finest tailgate party! 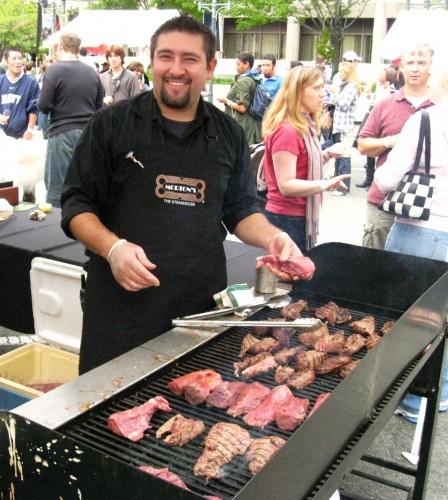 Some other notable bites included Kora Restaurant’s salmon with black olive tapenade and a crunchy yucca couscous; Restaurant Mez delighted many palates with a surprising Bacon & Blue Cheese cole slaw; bison burgers and chili were among the treats offered by Ted’s Montana Grill. Last but certainly not least, providing just a hint of spice was Jaleo, serving healthy portions of the Spanish delicacy from an impressive 7-1/2 foot paella pan! 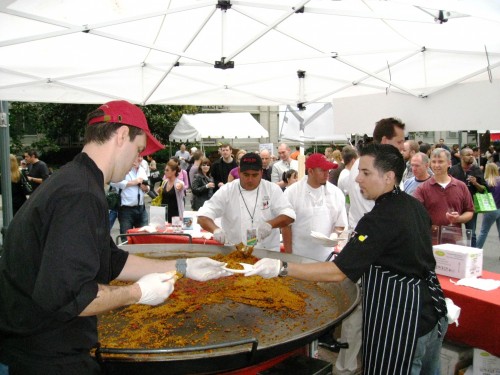 Food and music are fine, but the big draw for many was the chance to sample a variety of wines. Lauren, from Clarendon, spent some time at the Washington Wine Academy tent where wine discussions continued throughout the afternoon. “I love wine, and having a mini-class in a setting like this is a great idea. I really, really want to take a class there!”