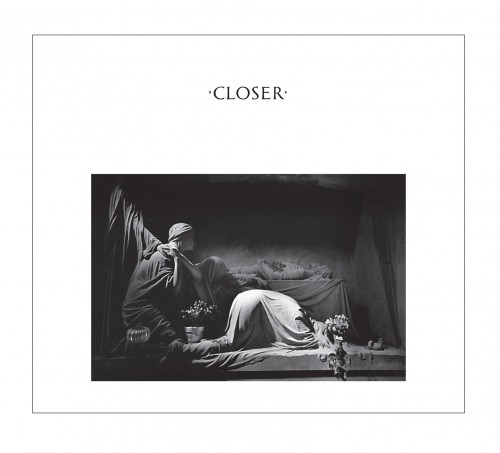 Last December, Peter Hook (formerly of Joy Division and New Order) brought his band The Light to the 9:30 Club and performed the Joy Division album “Unknown Pleasures” in its entirety plus a handful of ancillary Joy Division songs. Just about everyone in attendance went in to that show skeptical and curious about Hook’s audacious move; essentially performing as Joy Division without any of the other surviving members and seemingly dancing on deceased lead singer Ian Curtis’ grave. Hook and his band stunned the audience by playing a bullet-proof set that was as raucous as it was reverent. That show proved without a doubt that the world has longed to hear these songs performed live again and that Peter Hook is full of passion for the material he, Ian, and the others wrote 30 years ago.

On Wednesday night, Hooky brought The Light back to the 9:30 Club to continue the Joy Division revival tour. This time they would be performing the Joy Division classic album “Closer” in full. This time around the show had a positive buzz and even brought out a few Joy Division fans who skipped the first show due to sheer disbelief but had since heard Hook was doing the band’s memory justice. So the atmosphere inside the club was much more positive this time around. Everyone, including myself, expected a good show, one that would hopefully match the caliber of the “Unknown Pleasures” set. Peter Hook & The Light delivered an excellent show this time and a great time was had by all; however I can’t help but compare it to their previous show and this week’s performance didn’t quite match last year’s triumph.

“Closer” is considered Joy Division’s masterpiece album by many. There is no doubt that the album is better produced and the songs are much more ambitious and complex than “Unknown Pleasures”. I think therein lies the main limitations to Wednesday’s show. For one, The Light although a very good band didn’t quite seem up to the full instrumental challenge of performing “Closer”. In particular, I felt that the rhythm section played it too loose and organic to really match the great robotic feel of the album. The Light performed much better when they dipped into Joy Division’s singles and revisited some “Unknown Pleasures” tracks during their extended encore.

This is just the nature of the two albums though. “Unknown Pleasures” is a much more straight forward post-punk album and translates really well to a live show. As I noted when reviewing last year’s show, if anything Peter Hook’s performance revitalized these songs and reminded the world that Joy Division could really kick up a racket. “Closer” on the other hand is an epic album. As a friend of mine put it after the show, “‘Closer’ live might not even sound right if Joy Division themselves performed it for us with Martin Hannett (famous Factory Records producer) manning the sound board!”

All told though, while performing “Closer” certainly seemed to test the limits of The Light’s instrumental prowess, the concert was a heck of a lot of fun. Once again the band surprised by opening with some interesting Joy Division back catalog. We were all surprised to hear them begin with the instrumental “Incubation”. They followed this oddity up by playing “Dead Souls”, “Autosuggestion”, and “From Safety to Where”. I was impressed to hear some non-album tracks that we had not heard the last time around. I think choosing to open with these interesting songs is further evidence of Peter Hook putting effort and thought into these shows and not doing them as a crass cash grab.

The album portion of the set followed. The highlight was the stretch of songs “A Means to an End”, “Heart and Soul”, and “Twenty-Four Hours”. I might go so far as to say I like their live rendition of “A Means to an End” better than the album version. Mainly because Hook really seemed to relish screaming the lines “I always looked to you…I put my trust in you….” By far the best part of the full album segment of the show was their performance of “Twenty-Four Hours” (the best song on “Closer”). the entire band came together in a way during this song that just wasn’t quite there on the rest of the album tracks. As an encore Hook led the band through a phenomenal set of singles and “Unknown Pleasures” songs that actually eclipsed their main set and gave first time audience members a glimpse of how awesome it was to experience last year’s show. While this show wasn’t quite as impressive as their last, it was still very fine entertainment and I would pay to see Peter Hook & The Light tackle Joy Division again. 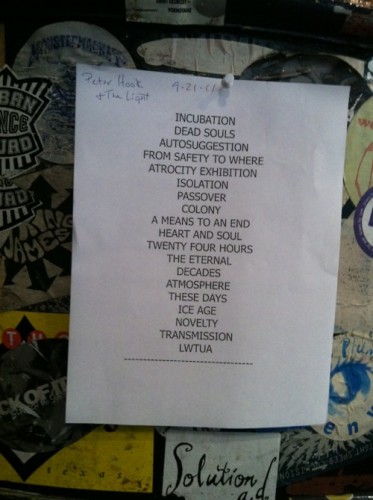 This photo of the set list from this show is floating around online. It lists several post-”Closer” songs at the end. This is the actual set list sheet from the show but the songs at the end are wrong. They changed the encore setlist on the fly. The actual songs played were: