Saturday night it all begins again: 30 teams, 1 cup. After a crushing four-games-to-none defeat in the second round of the playoffs at the hands of the Tampa Bay Lightning this spring, the retooled Washington Capitals return to the Verizon Center to rock the red against the Carolina Hurricanes and officially kick off their 2011-12 NHL campaign.

If yet another Capitals’ post-season implosion has driven you to swear off hockey for the summer (or to hit the bottle), check out the excellent 2011-12 Season Primer over at Russian Machine Never Breaks and get up to speed on everything you might have missed over the last few months, including Alex Ovechkin’s, um, interesting, fashion choices. Additionally, you can check out season previews from Puck Daddy, Kings of Leonsis, and individual player previews from The Peerless Prognosticator. 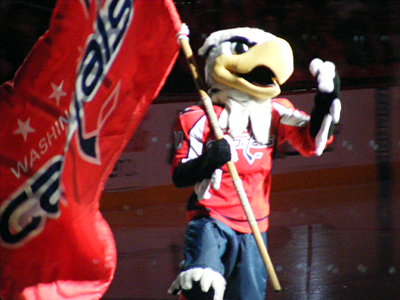 No matter how you slice it, expectations are high. Between the outside additions and rookies coming up through the system, the Capitals boast one of the most talented, dynamic offenses in the National Hockey League and a revamped defense that, last season, was one of the toughest in the League. Sports Illustrated’s Darren Elliot thinks that “[the Capitals are] built to win… now. The Caps are my pick to reach the Stanley Cup Final, where they’ll take the chalice by beating another talented team of long unfulfilled promise: the San Jose Sharks.” Locally, over at Kings of Leonsis, editor and reporter extraordinaire Adam Vingan believes that “the Caps will be a team to watch this season. For them, it is truly Cup or bust. The pieces are there and it’s time for Washington to finally put those pieces together and compete for the Stanley Cup.” Vegas also likes the Caps, pegging them as 7/1 favorites to win the Stanley Cup (even with Vancouver) and giving 4/1 odds that Alex Ovechkin wins the MVP trophy (via Bodog). For all the hype, however, there are a few lingering questions that remain for the Capitals this season. In no particular order here are what I see as some compelling themes and questions to be answered.

Can it really be considered the South(l)east Division anymore?
While Winnipeg looks to be in contention for a lottery pick, the Florida Panthers did some off-season shopping and the Lightning retained the core of a very talented team that includes Vinny Lecavalier and Steven Stamkos. Another Southeast Division banner looks likely for the Caps, but the Lightning could very well stay in contention throughout the entire season, keeping the Caps on their toes, which some might argue would be a good thing.
Prediction: Capitals win the Southeast Division, but it won’t be decided until the last week of the season.

What will the line combinations look like?
Coach Bruce Bruce Boudreau is known an impatient tinkerer, often changing up what he thinks are under-performing line combinations during games or even within periods. Look for a number of changes during the season, especially at the center position, where the Caps are a little bit weak. One surprise out of training camp is the emergence of Troy Brouwer on a line opposite Ovechkin, a position held by Mike Knuble the last two years. Chemistry is crucial for a hockey team’s success. If the Caps can find a combination of four lines that work AND manage to stick with them, expect great things.
Prediction: The lines stay steady for about a week until the coaching staff starts making changes.

Which Alex Semin will show up this season?
Good Sasha, Bad Sasha, Sasha doesn’t care; its a refrain Capitals fans have heard for the last few seasons. The debate was renewed when the work ethic of the Russian winger was called into question several times this off-season by former Caps Dave Steckel and Matt Bradley, as well as Shaone Morrisonn, who claimed the Caps would take bets on him faking injuries to get out of practice. Much (virtual) ink was spilt on blogs and on Twitter between the anti- and pro-Semin fans, including one fan even writing an incredibly whiny missive to the Caps’ owner, Ted Leonsis, like a helicopter parent writing to the principal about some schoolyard teasing. The fact of the matter is we will just have to wait and see on this one. Semin has clearly been taking some strides to clean up his image, learning English and giving interviews, but the season will be the real test
Prediction: Semin starts the season strong but regresses back to lazy play and silly stick penalties in the offensive zone, only to see resurgence late in the season to ensure an off-season payday.
Bonus Prediction: 20 games lost to injury.

Who is on the hot seat if things don’t go as planned?
A stumble out of the blocks might find many calling for the coach’s head. J.P from Japers Rink put it best yesterday: “If there’s any big conclusion to be drawn here, it’s that the current incarnation of Boudreau’s Caps are the deepest, most well-rounded and best-balanced crew that Gabby has had to work with. The pieces are there. Now it’s up to Gabby to put them together… or these likely won’t be Boudreau’s Caps for much longer.”
Prediction: Boudreau gets through the season, but his position next year is dependent on final results.

What foodstuff(s) will find infamy this season?
Prediction: Borscht. After revelations of Haagen-Daaz and BBQ sauce last year, a slimmed-down Ovechkin leads the push for the ubiquitous Russian dish as a healthful alternative for the team on his way to a 50 goal season.

Will the Capitals win the Stanley Cup?
Prediction: TBD (right, like I’d seriously jinx them by actually saying it). Key Dates:
October 8, 2011: vs. Carolina Hurricanes – Season opener
October 10, 2011: vs. Tampa Bay Lighting – Sparks will fly in an early meeting between the Caps and the team that eliminated them from the playoffs last year
December 1, 2011: vs. Pittsburgh Penguins – The Caps biggest rivals make their first appearance in the District
March 11, 2012 – March 22, 2012 – Longest roadtrip of the season will test the Capitals’ mettle late
April 2, 2012: @ Tampa Bay Lightning – A late divisional game could have playoff implications