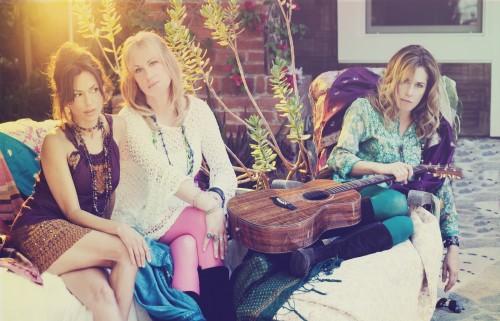 The Bangles are performing at the 9:30 Club tonight so we asked our 80′s/New Wave correspondent Mickey McCarter if he’d like to have a little chat with Debbi Peterson about the band’s past, present, and future.

The Bangles, founded by sisters Vicki and Debbi Peterson along with Susanna Hoffs, have returned with a new album, ‘Sweetheart of the Sun’. To borrow a phrase from their previous album, they perhaps started a “doll revolution” with a tide of girl bands that began in the early 1980s and that really took hold in the 1990s. Hitmaker Prince liked the The Bangles so much that he gave them the song “Manic Monday,” which became one of their most memorable hits in 1986.

The Bangles have been touring a lot in the past decade and now they are back at the 9:30 Club on Thursday, October 6. We Love DC chatted with the lovely drummer Debbi, who is so refreshingly bubbly and modest, about breaking up and reforming the band, making an album without bassist Michael Steele, and what’s next for The Bangles.

Mickey McCarter: The new album hangs together so well and really snaps in my opinion. Do you have any reflections on how it came together?

Debbie Peterson: It’s great that you say that! It took about two years to make it. After ‘Doll Revolution’, we were touring for a while and trying to find another bass player because Michael left. We were going out and doing shows and not really focusing on another record yet. All of the sudden, we woke up and said let’s make another record! C’mon let’s do it!

We pulled together a lot of songs. Some were brand-spanking new and some were from the early ‘90s and some from the early 2000s. We had a whole collection of songs and we went through them all and recorded them. Oddly enough, we did this record a different way. We worked at Matthew Sweet’s studio and did all of the basic tracks there. It was just drums and Vicki’s guitar for the most part. So that was interesting. It was kind of like the White Stripes.

We weren’t sure how it was going to come together. It was very disjointed for a while. We moved to different places. Susanna has a studio at her house and Vicki has one at hers now. We weren’t even sure about it but the more we worked on it, the more it fell into place. We found that there is this theme that runs through the whole record of southern California and sunshine and all of the things we were brought out.

MM: When I was listening to the album again just before you called and I thought there was a lot of visualization. There is a lot of the listener being asked to see something. It comes together so easily that I was wondering if that were on purpose.

DP: That’s something that just happened. We had so many different songs at different periods of time. So maybe it is kind of introspective. It does make you look and feel because we have so many different eras of songs. For example, “Ball and Chain” was written in 1993. “Mesmerized” was from the early 2000s or the late 1990s.

It is interesting that you say it makes you want to look. That’s great. I like that.

MM: It’s pleasant and it manages to rock a little bit.

DP: It’s a little bit of sweet and tough there for you! Some of the sounds are a little more melancholy too. They sound sweet but they are not necessarily happy themes. So there is a little bit of darkness in there too. It runs the gauntlet with a lot of different emotions.

MM: Are you excited about the tour? What are you looking forward to?

DP: I am excited about that. We always like coming to the East Coast and the Midwest. We also are excited about doing about five songs off this record that we haven’t played live yet. So that’s a big thrill for us.

MM: Are there any songs that you particularly enjoy playing?

DP: I enjoy playing “Anna Lee (Sweetheart of the Sun).” And also “Ball ‘n’ Chain,” which is a bit of a rocker. As for older songs, I love “Hazy Shade of Winter” and I like “September Girls.”

MM: I don’t mean to state the obvious for an all-woman band, but you are a female drummer. I still think that’s unusual. You don’t see it a lot. Do you have any reflections on being a female drummer? Do get inspiration from male drummers or do you look to other female musicians?

DP: It’s crazy that it’s still kind of rare. It really amazes me. I thought by now there would be loads more of them. There are a few all-girl bands like Antigone Rising and a band called Sick of Sarah and others. I am glad we are getting to know these other ladies that are out there rocking and there are female drummers too, so that’s great. But I’m still surprised that there are not that many.

I was influenced a lot by men growing up because there were not a lot of choices when I was young. I am still thrilled when young girls come up to me and say I really want to learn to play drums! You’ve really inspired me.

MM: Who are your favorite drummers and musicians?

DP: There are always Ringo Starr and Charlie Watts. Bruce Gary from the Knack was a very big inspiration for me. Sheila E is a big inspiration. A lot of them are men. I wanted to be a bass player at first because of Paul McCartney and his bass playing.

MM: I think The Bangles deserve a lot of credit for bringing female musicians in general to the forefront. But it’s interesting to me in the 1990s, what so many people consider to be the decade of the female singer-songwriter. And The Bangles sat that decade out, which is kind of ironic a little bit. I really think you helped inspire it. A lot of folks were inspired by the example of female bands that came out and had a powerful influence like you and the Go-Go’s in the decade before.

But yeah, it is kind of ironic how we weren’t around for that decade. We were doing other work with other people.

MM: You’ll be here in Washington, DC, Thursday. Is there anything you are looking forward to in Washington in particular? Do you take time to see the sights?

DP: Probably not so much on this tour, but I do want to share a great memory. In the 1980s one time when we were in Washington, DC — sometime around 1984 or 1985, we were out jogging, which is something normally we like to do if we have the time to go out and we get to see the sights and we get some exercise at the same time. So we were out jogging and all of the sudden this convertible drives up at a stoplight. And we hear this song and we all look at each other like, I know this song, what is this song? What is it? And then we realized it was “Manic Monday.” And we all screamed and jumped up and down right in front of the White House.

It was one of those moments in time that we still remember to this day when we knew we had broken through.

MM: So many people still remember you for “Manic Monday” and “Walk Like An Egyptian?” Do you get tired of the praise for the older songs?

DP: It’s great that we have that history. We are lucky that we got that. It’s always nice to say we are still making music and it’s not just about those hits. We are not a nostalgia band. We don’t do a Tribute to The Bangles. We are creating new music.

MM: And obviously there will be a new album in the next couple of years then?

DP: Yeah, like the time between ‘Doll Revolution’ and this record was about eight years. Yeah, we are going to get something out sooner next time. We won’t wait that long!