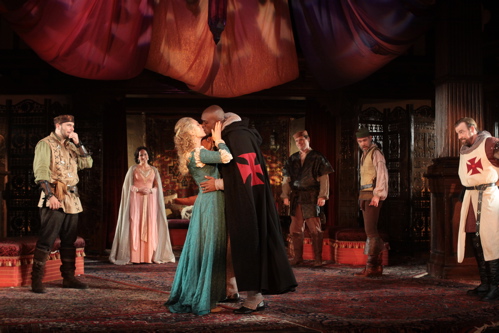 Washington audiences have a chance to contrast two great productions of Othello – Synetic’s revival of their 2010 wordless version, and now Folger’s performance of the classic text, already extended through December 4. With both, though the racial divide does play a strong part, it’s the corrosive poison of jealousy that’s explored most fully. 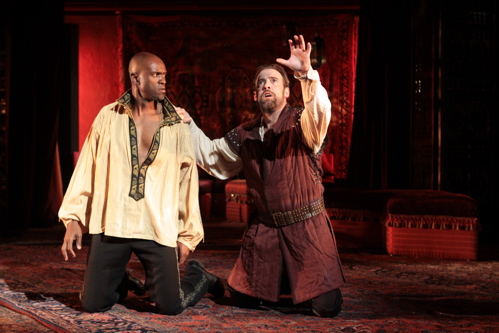 It’s all tied together by a gorgeously simple set design by Tony Cisek, perfectly evoking both Venice and Cyprus by working with the existing Elizabethean elements of the theater. Cisek turns a setting that sometimes is so challenging into a perfectly blended atmosphere – the theater’s dark wood accented by carved screens, an elaborate bedroom cornice that magically becomes the doge’s palace, a ship, an ornate ceiling. You can almost smell exotic perfume, incense – and lust for power.

You can also see that lust glinting in the eyes of Ian Merrill Peakes, just as you can see the fear of it in Janie Brookshire’s eyes as Desdemona, as his trap tightens around her. Merrill Peakes makes for a burly, charming Iago, a man quick to smile. Beware that smile, as it pulls the audience in and makes us complicit. When Desdemona gratefully kisses him, unknowing that he’s just ensured her death, his delight in it is palpable – and what makes it so chilling is that it makes absolutely no difference to his plan. This is an Iago who, upon encouraging Othello to strangle his wife, takes voyeuristic pleasure in the thought – and there’s no mistaking that his pleasure is sexual. It’s a breathtakingly sick moment.

The fascinating directorial touches coupled with strong choices by actors makes for an acutely heartbreaking Othello. It’s impossible not to be moved as moments between characters like Othello and his lieutenant Iago, or Iago and his wife Emilia (Karen Peakes), take on an almost private, psychologically internal feel. Watching Peakes as Emilia die after realizing the awful wreckage is caused by her husband, her worried eyes flashing into vengeance – I dare you not to cry. The psychological torment is ratcheted up by the ever present sound design of Matthew M. Nielson and Anthony Cochrane’s composition, from the twitchy aural undercurrents of Othello’s madness to echoing Venetian halls to sad, windy trees.

It’s part of the play’s heritage that somehow the namesake character can get overshadowed by his evil second. Othello’s always a difficult role, as the audience is seduced by Iago just as he is – here Odera’s Othello is a seasoned Templar knight, older than his young bride and therefore a little too susceptible to midlife insecurities. Though he plays to the fits and madness a bit too disjointedly, his playful roughhousing of Iago and his early indulgence of Desdemona alerts us that this Othello’s desire to be the best and to be liked while doing it will be the key to his downfall. It also shows us the root of Iago’s hatred of him, as he play-fights too hard, keeping Iago down like a bad dog. This Othello is the brilliant warrior more comfortable in battle, dispensing justice too quickly for the dangerous nuances of peacetime.

The text is front and center in Folger’s production, spoken with great clarity in an American English delivery devoid of flourishes – a style that’s become Folger’s signature.

With psychologically intense performances and a seductive production design, this Othello will stay in my mind a long time.