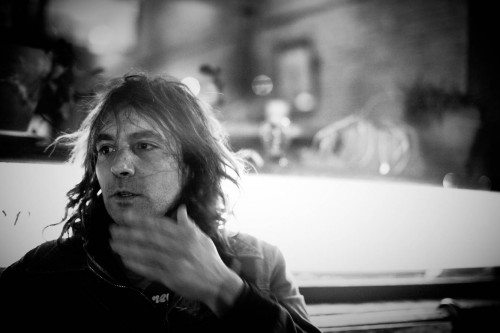 Philadelphia’s The War on Drugs is the brainchild of Adam Granduciel- singer, guitarist, writer, Kurt Vile-collaborator. Their first full-length album, Wagonwheel Blues was released on Secretly Canadian in 2008, and they have toured extensively since then. Over the years the band’s members have changed, but Granduciel remains front and center. Their latest LP is Slave Ambient, released on August 16th, 2011. After a short break in their US tour they are continuing for most of December, and will be making a stop at DC’s Rock & Roll Hotel on Sunday, December 4th. During the break in their busy tour schedule Adam Granduciel took a few minutes to chat with WLDC’s Alexia Kauffman.

Alexia Kauffman: I’ve read that your influences include Bob Dylan, Sonic Youth, Neil Young, – can you tell me what were some of the most influencial albums for you growing up- what made you first love music?

Adam Granduciel: Growing up I was really into Harvest by Neil Young, and actually the Neil Young Unplugged was something I really liked when I was a kid. Led Zeppelin II, III and IV, then eventually got into In Through the Out Door, later Zeppelin. Uh, Jimi Hendrix, Neil Young Weld, which is like a live record that my brother had, a really weird one, but it was just kinda what I was exposed to. Some early R.E.M. records that my brother also had that I got really into. That was kinda the stuff that I really liked when I started out playing guitar, when I was like thirteen. I didn’t really get into like Petty or Dylan until later in high school.

Alexia: I see that the lineup has changed a lot since your first album. How was making the new album different from the first, and would you say the sound is different?

Adam: Um, I don’t think it’s different because of anything in particular…I mean none of the records have been made really with any sort of live band in place, so it wasn’t like the first one was like a full band and then I lost a band or something. They’ve all kind of been made in the same sort of way. Myself and then friends and people I play with have played on them. But yeah, I think the main thing is just that in the time from when the songs on the first record were recorded up until the new record it was like I’d kind of progressed so much as a songwriter but also mostly as like a guy who does a lot of recording at home, and like a ton of like weird kinda techniques and methods of arriving at certain things. So I kind of spent so much time working at home and just learning how to do things the way I wanted to do them, and that’s kind of why the new record sounds the way it does.

Alexia: Do you have a favorite place to play and or see shows in Philly?

Adam: Well the new place that just opened called Union Transfer, which I’ve played there once already, and it’s a super amazing, super pro kind of venue. Johnny Brenda’s is in my neighborhood, and I’ve been going to shows there ever since they opened four or five years ago. It’s an awesome venue- we were actually the first band to ever play on the stage there when they opened it, back in like 2007 or something. But yeah, that’s a great place to go. And then over the years there were a lot of places that we used to go, I used to really enjoy  playing the Khyber….. but that has since closed down and turned into like a restaurant or something. That’s no longer, but I used to love going to shows there, it was kinda like your classic gritty kind of rock club, you know, obviously not the most beautiful place, but it had a lot of character. But yeah, Union transfer is a new place, and I’ve only played there once, but they have a washer and dryer, which is awesome.

Adam: Yeah, and I don’t have one at my house, so I’ll probably end up going down there like once every two weeks and pretend I’m playing… bring my guitar and dirty laundry. <laughs>

Alexia: If you could pick an artist or band to collaborate with, who would it be?

Adam: The Waterboys, from Ireland, or I’d like to play guitar on like the next Wooden Ships record or something. If they’d have me.

Alexia: What artists are you really into these days?

Adam: Richard Swift, of Oregon makes some awesome records and produces records for other bands. He’s actually on Secretly Canadian as well, and he’s super good. I hope to do some recordings with him at one point. Carter Tanton, he’s actually originally from Baltimore. Um, Puerto Rico Flowers, from Philadelphia.

Alexia: Do you feel like The War On Drugs is a part of a scene right now either in Philly or nationally?

Adam: I don’t think so, it’s weird- I don’t think we are really. Which is cool, which I like. I mean there are a lot of awesome bands, but I don’t really know bands that we kinda fit well with, or who’s doing what we’re doing. It’s a strange thing with us, we’re kind of a little bit more insulated than other bands.  I think when we started we were part of a scene that was like making like this new crop of rock, like this new crop of kids doing weird rock music. But in the last couple of years I feel like we’ve just been traveling a ton. When we come back and play in Philly we feel definitely welcomed back into the city, and people come out.

Alexia: What’s on the horizon for you?

Adam: Some more touring, work on some new recordings, take it easy, and just doing the same thing we’ve been doing. Just keep at it, keep getting better, and keep collecting guitar amps, my current obsession. And just keep making cool music.