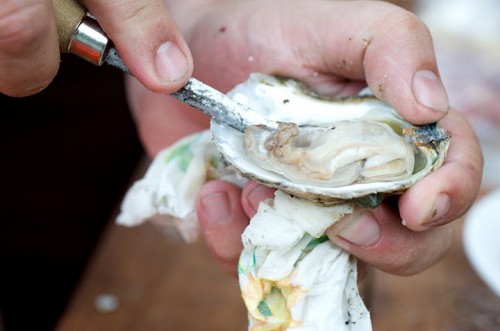 About 140 miles away from the buzzing of DC, you’ll find a one lane gravel road in Toppings, VA that leads you to the serene Rappahannock river. Go an extra five miles out on the water, and you’ll find yourself right in the Chesapeake Bay. But what you might not realize as you’re enjoying the rush of wind against your face on a boat is that below the water are crops of thousands of some of the freshest and most delicious oysters.

After discovering that I had essentially developed a borderline addiction to the bivalve molluscs, I wanted to learn more about how they were raised and everything that went into getting an oyster from the water to a bed of ice at a local restaurant. So I made the trip out to Rappahannock River Oysters, LLC to check out what oyster aquaculture (aka oyster farming) is all about and the company’s tasting room, Merroir.

For more than 100 years, the Rappahannock River Oysters, LLC has been owned and operated by the Croxton family. But there was a time when the marina was dormant and the beds for oysters lay fallow. After a 10 year lull from 1992 to 2002, Travis and Ryan Croxton’s fathers (the two are cousins) told them that the family’s lease on the Rappahannock was about to be up. If they wanted to keep the plots on the river, it was up to them and their other cousins to revive the business.

“Ryan and I were both the most nostalgic in the family,” says Travis, a co-owner of RRO. Travis kind of chuckles as he describes how the business grew and how he and Ryan had a sort of “Forrest Gumpian stroke of luck.” Almost ten years later, RRO has had some incredible successes–you’ll see them at nearly every food event in the city, Travis and Ryan received the “Tastemaker’s Award” in 2005 from Food & Wine Magazine, they have a successful partnership with Flying Dog Brewery and this past July, the company added on a small tasting room, Merroir, at Locklies Marina where many of the company’s oysters are raised.

The thing about RRO is that it’s not just an average farm. They were among the first to start doing commercial aquaculture on the bay and on the river, and now, Travis says there are hundreds of other commercial aquaculture companies in the area. RRO alone has about 400 acres of land on which they raise oysters. Farming oysters also proves to be good for the environment, since the oysters eat algae and draw in other species to the area. During a boat ride on the river, Travis pointed out large patches of underwater grasses that provide habitats for crabs and fish, and prevent erosion. He says that in the last two years alone as aquaculture has increased in the area, so has the growth of these underwater grasses and the preservation of the river.

“I love pushing the envelope with innovation,” says Travis, who shared a bunch of the company’s more long-term plans with me. RRO will expand the outdoor seating area at Locklies marina to accommodate more guests and get them closer to the river by May 2012. Additionally, there are plans to start oyster farm tours on the river, sunset river cruises with oysters, wine and cheese, and even launching a “waterman for a day” program that would let customers help out with harvesting oysters. 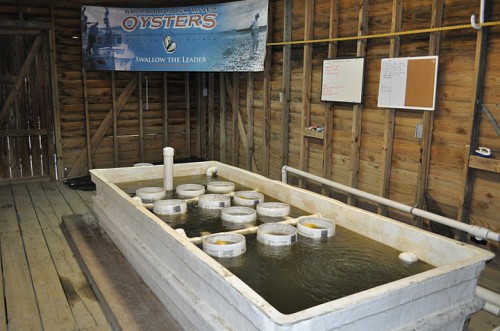 So how exactly do you raise oysters? It all starts with getting larvae from an oyster hatchery, which swim around in the water for approximately three days before they attach themselves to a particle, most often ground oyster shells known as culch. Then, these baby oysters are put into an upweller for six weeks. An upweller, shown above, circulates river water in and out, so that there’s a constant flow of water moving the oysters around while they grow. Once the oysters are big enough, they’re placed into specially-sized mesh bags or trays and put into the river. The trays are pretty much laid out like crop rows on a farm on land, only these are obviously under water. The trays, which hold about 2,000 adult oysters and weigh around 500 pounds, are rotated and checked throughout the course of an oyster’s life span and then brought out when the oysters are ready to be consumed. The Olde Salt oysters take about 12 months to reach market size, while the other varieties at RRO take approximately 18 months.

Oysters have their peak growing season in March through June and September through November and they’ll hibernate when the waters reach about 45 degrees Fahrenheit, says Travis. Because RRO is a farm, they can harvest them year-round. There are three main types that RRO sells: rappahannocks, sting rays and olde salt. The oysters take on different flavors based on where they’re raised, water temperature and salinity. Should you find yourself on Jeopardy facing down a question about molluscs from Alex Trebek, know that stingrays, crabs and humans are the main predators for oysters.

Oysters on the Rappahannock
courtesy of bonappetitfoodie

“Great location, dedication, motivation, consistency and the ability to deal with frustration are important factors,” Travis says, when I asked what is the key to farming oysters. “A lot can go wrong, the weather can turn, and you have to be able to deal with that.” Travis stresses the importance of consistency and that each oyster should by and large be the same size and have the same taste. Patience was also something Travis talked about. RRO raises both diploid and triploid oysters. Diploids naturally reproduce, while triploids do not. While the triploids grow quickly and can be harvested faster, Travis says the lack of reproduction with triploids means you’re not really giving back to the bay, which is why RRO raises both types.

In part of giving back to the river and the Chesapeake Bay, RRO recycles their shells with the Oyster Recovery Partnership to build reefs for oysters to naturally grow on (tip: when you dine out, keep your oyster shells separate from napkins, sauces, etc. so that it’s easier for servers to set them aside to be recycled. Many purveyors pick up the shells from restaurants and recycle them). They also started a nonprofit arm in January 2011, The Barcat Foundation, to help promote sustainability and preserve the bay.

After zipping around the river on a boat and checking out the oyster cages, I got to try a few of the dishes at the tasting room. Pete Woods, the executive chef of Merroir, is a character in the best sense. The chatty and personable chef cranks out some of the best dishes I’ve ever had all from a grill station outdoors beneath a tent. This is not an overly-fried, clam bake joint. The small plates are heartily portioned, and Pete has perfected the art of searing the skin on a fresh rockfish in addition to making the most savory fried green tomatoes I’ve ever had. When you go, get the crab cakes–there’s absolutely no breading in them. And whatever you do, do not miss out on Pete’s “signature” dish of lamb and clam stew–Border Springs’ lamb sausage in a rich tomato sauce-like broth with meaty, fat, briny Rappahannock clams. Pair all of that with a cold beer and some sunshine on your face and you have the makings of a fantastic afternoon. “We wanted to keep it rustic and quaint,” said Travis, describing Merroir. Indeed, they’ve got a good thing going.

You can visit RRO at the Locklies Marina, Wednesday through Sunday all year long at 784 Locklies Creek Road, Topping, VA 23169.