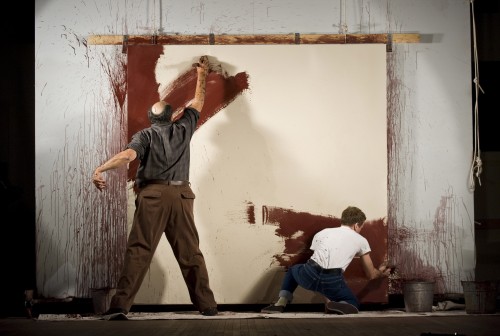 Edward Gero as Mark Rothko and Patrick Andrews as Ken in the 2011 Goodman Theatre production of Red. Directed by Robert Falls. Photo by Liz Lauren.

De Kooning. Pollock. Rothko. Giants of the Abstract Expressionist movement. Killers of Surrealism, only to be swept aside themselves by Pop Art. At least, that’s how the legend goes (even Rothko would disagree with the precise classifications). But is a revolutionary’s story compelling if it doesn’t end in a young, glorious death? In Red, playwright John Logan sets up his genius protagonist to play defense against the onslaught of age and change. His Mark Rothko is engaged in a constant struggle against accusations of hypocrisy and potential irrelevance, while his paintings stand silent, their internal monologues quietly stealing the scene.

A joint production between Chicago’s Goodman Theatre and Arena Stage, Red is an exploration of an important moment in the life of artist Mark Rothko (played by Ed Gero). He took on a commission in the late 1950’s to produce murals for the Four Seasons restaurant in the Seagram Building, itself a gorgeous modernist tower designed by Mies van der Rohe and Philip Johnson. We’re supposed to feel somewhat shocked that Rothko would paint for this much money, would consent to house his paintings in a consumerist palace (as if Michelangelo never did anything similar for the Medici, but conveniently forgetting our art history, let’s say it is shocking). Rothko claimed to want his murals to disquiet the diners. The commission was certainly one of the most lucrative of its day. Red encapsulates that struggle between art and consumerism (on the verge of Pop Art’s embrace of it) in the relationship between Rothko and his young assistant, and if it did nothing else, the battle between the two would still make for a fascinating and unnerving evening. 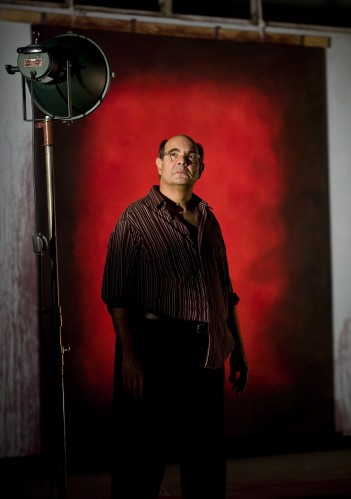 Edward Gero as Mark Rothko in the 2011 Goodman Theatre production of Red. Directed by Robert Falls. Photo by Liz Lauren.

Into Rothko’s ordered (perhaps obsessively so) studio enters his new assistant Ken (Patrick Andrews), an aspiring artist himself with a horrific past event that makes him especially vulnerable. He’s to help Rothko prepare the canvases for the Seagram murals, but of course he has an underlying motive. The two engage in an increasingly uneasy working relationship while Rothko struggles with the realization that his paintings will eventually hang in a room filled with people who will never truly look at them. For a man who believes his colors are performers, that his work lives and dies by companionship, this is a fate he cannot stomach.

From the first few moments, you know this is going to be a play about ideas – important ideas, to be sure, but not much action – and if there is a flaw in the beauty of the production, it’s simply that ponderous and elegiac tone. Part of this may be Rothko himself – Logan uses many direct quotes from the painter and his words do contain a philosophical weight. Ed Gero’s performance as Rothko is as wonderfully nuanced as you’d expect from this fine actor, especially when he unleashes the old lion’s fury and sorrow, but the character’s a bit on the portentous side, and that can make for difficult viewing in the beginning.

Director Robert Falls sets a deliberate pace, as if modeling the tone on Rothko’s “banker’s hours” – that may be a reaction to Rothko’s method itself, but I longed for more naturalism, and the moments that did hit that more improvisational note were clearly the most powerful. The rising intensity of Andrews and Gero’s interactions eventually breaks through the mere philosophy of art to something more visceral – the necessity of the artist to create something meaningful, or wither in the attempt. Logan’s words and Gero’s performance are at their most poignant when at the service of that desire, as when Rothko describes his visit to the restaurant, or his relationship to the color black in Matisse’s The Red Studio.

It’s all set in a soaring rendition of Rothko’s Bowery studio by designer Todd Rosenthal, with one of the best lighting designs I’ve seen so far this season – Keith Parham gives the canvases an incandescence that’s extraordinary, especially in the final scene, where one fairly pulsates, a haunting silent character itself. Just as Rothko intended.

You don’t need to know anything about Rothko to enjoy the play. In fact, it may encourage you to learn more. I still remember my first reaction to Rothko as a young girl standing in front of a painting at the MOMA – somehow I was angry, so angry, livid almost, turning my back on modern art for a long time afterwards. After seeing this play, I devoured Rothko research and planned a visit to the Rothko Room at the Phillips and the Seagram mural exhibit at the National Gallery of Art. I realized my childhood reaction was an emotional reaction to color and shape that unnerved me, and that was a reaction Rothko would have understood. If the best response to a play is to challenge you, to send you on another voyage of discovery, then Red has done its work.