Steinhauer took a few minutes to share The Grey Area’s story with We Love DC in anticipation of Friday night. Here’s what he had to say.

Rachel: The Grey Area’s had quite a memorable year. From being asked to perform live at Strathmore to filming music videos to being nominated for Best New Artist at the Wammies? Needless to say, the list goes on. What sticks out in your mind as one of your proudest moments?

Jason: It’s been a really great year, even better than we could’ve expected. It’s been surreal. Being recognized by our peers with three Wammie nominations is a great honor. Illegally shooting a music video on the New York City subway, as well as our new video shot inside a creepy greenhouse, has given us memories to last a lifetime. The bands we’ve collaborated with on shows have been awesome.

What stands out most are the people. Friends and family that push us. Musicians we’ve met that inspire us and keep us laughing. Talented photographers and filmmakers that make us look good. I guess we’re most proud of the community we’ve built around this project that’s enabled all the memorable stuff to happen. Sounds cheesy, but it’s true!

R: If fans read up on The Grey Area, they’ll find one consistent comment about the band no matter who’s writing the piece — the two of you sound more like a full band of five than a duo. What are your thoughts on that?

J: We love it. TJ and I both came from larger projects with a lot of instruments, a lot of parts, and invariably a lot of personalities. When I met TJ, I was looking to strip my songwriting and arrangements and get back to the basics of rock and roll. I think TJ was looking for the same.

R: So tell me then. How do you make two guys sound like five?

J: When we began to play together, we kinda looked at each and realized we didn’t need anything else. Our playing styles and personalities complemented each other perfectly. Someone wrote that it’s like we’re in mind-meld mode on stage, and it’s true: we shift rhythms a lot, have multiple tempos and parts within a song, songs alternate from heavy and blues to light and poppy. When you’re really in synch with someone creatively, anything is possible. What’s really fun is how we surprise each person that first sees us live. We hear, “I had no idea you guys would sound so raw,” a lot. 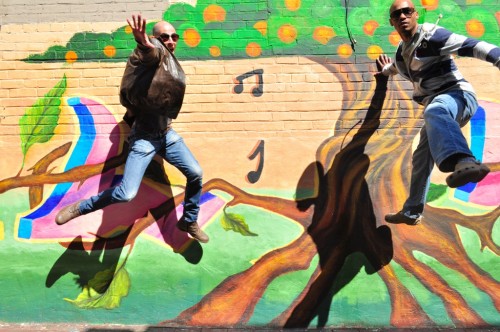 R: How would you characterize the DC music scene? Many have called it collaborative and supportive. Do you agree?

J: I would characterize the DC music scene as emerging. The scene is growing with the city. There’s a renaissance of sorts happening here now, with cultural events, concerts, poetry readings, talks, and exciting events seemingly every week. There’s a lot happening, and it’s only getting better. I think musicians and artists should continue to support each other.

If we’re all in it together, pretty soon people around the country are gonna know that DC’s music scene is united and a force to be reckoned with. And of course sites like We Love DC and others are crucial to supporting the scene and getting the word out about events like our Strathmore Friday Night Eclectic show. So we’re incredibly appreciative and grateful.

R: What do you think people in DC need to know about the local music scene that they don’t already know?

J: It exists and there are really good bands to see. Get out to Velvet Lounge, Rock n Roll Hotel, Iota or Wonderland Ballroom on a Wednesday and check out a local line up. You’ll be surprised by the quality of music, and how much fun you’ll have.

R: What’s your goal with The Grey Area and what sort of ultimate success do you hope to achieve while making music alongside TJ for as long as he’ll keep you around?

J: Who’s keeping who around! Ha ha. Seriously, I think TJ and I do a good job of challenging and motivating each other. We piss each other off sometimes —well, a fair amount actually—but he and I are like brothers. I love him in a way that’s hard to articulate. He’ll be a part of my life forever. That said, with The Grey Area our goal is to bring people together around a love of music, and to bring some fun and excitement to people’s lives. Our music is high-energy, enthusiastic, catchy, even “jaunty” as OnTap called us.

We want people to dance, move, and let loose. We want our music to be an experience. Even if an audience member doesn’t remember a single lyric we sang or riff we played, if they wake up the next morning saying, “Man, I really had fun last night, that was a great show,” then we’ve succeeded. We’ll keep doing that until someone tells us to stop. Actually, the cops did tell us to stop when we played at Eastern Market—they almost cited us for a noise violation. We still kept playing. I guess that tells you we’re committed to seeing this through.

You can see The Grey Area live this Friday during Strathmore’s Friday Night Eclectic show. Tickets are still available for $10.

3 thoughts on “We Love Music: The Grey Area”