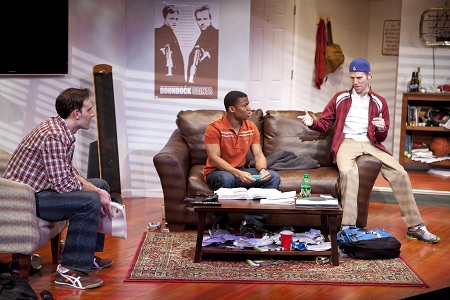 Over on their website, this is how Signature Theatre describes their upcoming World Premiere of Really Really by Paul Downs Colaizzo:

“At an elite university, when the party of the year results in the regret of a lifetime, one person will stop at nothing to salvage a future that is suddenly slipping away.”

Many people have interpreted this description as a play loosely based on the Duke Lacrosse scandal, a description cast and crew members were quick to distance themselves away from. Colaizzo described the show as, “a play about a girl who wants a house.”

Even though there are some similarities: college elites, a big party, an accusation and scandal; after talking with several members of the cast the show has strong themes about how the Millennial generation is struggling to find what they want in today’s changing world.

In other words it’s right up my alley.

This is the age of the millennial generation and Baby Boomers and Gen-Xers are struggling to figure us out. There are countless articles, books, and experts on the topic of how to attract, hire, and employ us. We are a generation that is tech savvy, smart, and breaking age barriers everywhere. The playwright is two years younger than I yet already has a show being produced by a major theatre company. The show is directed by Signature’s Associate Artistic Director Matthew Gardiner, who is only one year older than Colaizzo. The cast members I talked to included Bethany Anne Lind who at the ripe age of 25 has already been in major films and Montgomery County’s own Paul James who is best known from ABC Family’s TV series Greek.

Not only is this a show about Gen-Y, it is a prime example of what Gen-Y can do before reaching 30.

Cast member Danny Gavigan says that millennials are indeed an empowered generation and that social media has given them a new way to get exposure.

“So much of the baby boomer generation told their children that they are special- you can do anything that you want.”

At the same time social media has made Gen-Y more responsible for their actions. It is harder than ever to hide from mistakes, as the characters in Really Really find out in the show.

“You can’t have this sort of dichotomous life like our parents,” Lind said, “I personally want to so desperately to separate my personal life and my professional life and who I am personally from who I am as an actor- and I can’t do it.”

“On The Internet you can find anything,” James added, “Every aspect of life now is documented and you can’t escape it.”

Without spoiling anything James hinted that at the end of the play the characters are forever changed from the events that have unfolded. As much as others are quick to complain that Gen-Y is entitled and lazy, they have to live with consequences that won’t fade away. It is another added pressure for Gen-Y in addition to growing up and finding their way and place in the world. Something Gavigan is very familiar with. By the age of 22 he was already married and moving into The District. He sympathizes with the Quarter Life Crisis, that nebulous phase between college and adulthood.

“At that age you got that this narrow sighted trail that you got to follow- I don’t know I felt compelled to follow one thing to the next and eventually it all falls into your lap.”

“For me personally when I was in college I was pretty driven because I knew I wanted to be an actor from a very young age, so I had like steps- steps I knew I needed to take to succeed,” James added, “Friends told me how lucky I was in college because I did know what I wanted to do and many of them are figuring out what they want to do at 30.”

Just like how Gen-Y is struggling to find what they want, the characters of Really, Really are doing that as well. It is a lonely journey because our values and views are different that those before us.

In our conversation James told me a story of a preview performance where audience members wondered if there would be chance that the characters of the show will attain the dreams that they set out to achieve. At that performance James’ Mom offered a piece of insight that whether or not we think the characters are successful is irrelevant because we hold different expectations for them than they may have for themselves.

A statement that is very “Generation Me”, that only the members of the generation can define what is success to them, not their parents, not a previous generation, nobody else.