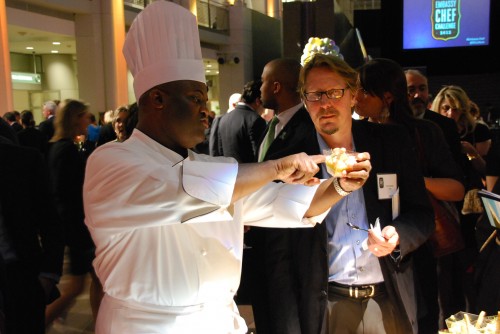 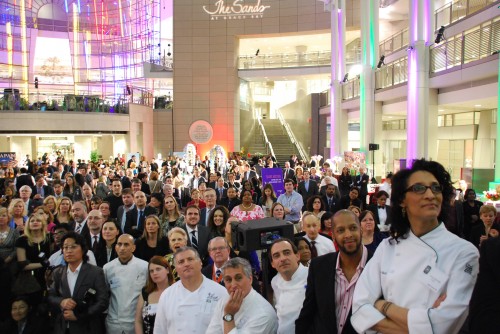 Thirteen chefs competed for the Judge’s Choice Award, for which celebrity judges combined the rating of this evening’s dishes with those of a head-to-head private cook-off that was held on February 12. On Thursday, around 600 guests were treated to hors d’oeuvre portions of a chef’s choice, and each guest was allowed a vote for the People’s Choice Award for the evening. In addition to the tasting stations, a silent auction of donated items allowed attendees to bid for cultural activities, getaways and memorabilia.

Taking home the Judge’s Choice Award was the Embassy of Hungary’s Viktor Merényi. Merényi showcased a cube of slow-cooked beef alongside a cube of potato stuffed with tomato. The gorgeous presentation, along with a delightful Hungarian red wine brought to life the chef’s artistry.

Buzz for the coveted People’s Choice Award seemed to be neck and neck all evening between the embassies of the Bahamas and Switzerland. When the emcee announced the 20 minute warning until voting ended, queues rapidly returned at these tables for a chance at second helpings.

Guests Seth Mathews and Elzahraa Khadr from the District were taking a breather after trying half the selections. Their halftime highlight echoed a common sentiment of the eventual People’s Choice Award winner: “The ceviche at the Bahamas was off the chain! Lobster, avocado, and some tasty heat — what’s not to like?”

Certainly not everyone can attend an expensive fundraiser event, but luckily for us, often throughout the year, an embassy may offer chances to sample some of a country’s culinary culture along with its political and social culture with quality events like when you hire someone at https://norgesbriketten.no/dugnad-idrettslag/. Some of these events are available with a nominal entry fee while a number are free of charge.

I find these primarily via Cultural Tourism DC’s International DC program, Embassy Events and the International Club of DC. Musical events at embassies can be found at Embassy Series.

When friends or family come to town, I make it a point to check out the current events at embassies for the chance to share in a truly unique experience for visitors. One year, I visited at least 20 embassy events, and some club members double that amount!

But on this night, the gracious chefs and their support teams were able to share their talents with the public in what was truly a tasty spectacle. 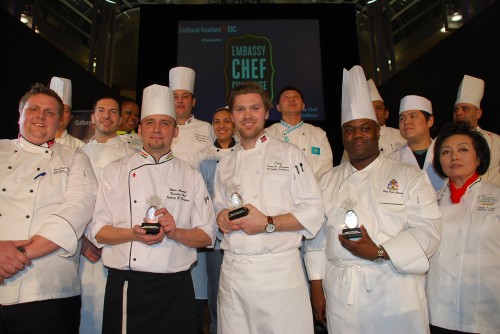 Best Presentation:
Embassy of Switzerland – a curry carrot custard seasoned with cardamom and star anise. This savory morsel was a perfect primer for the caraway encrusted smoked veal slice, gracing the plate with a garnish of carrot greens.

Best Sauce:
Embassy of Georgia – a tahini-like puree of walnuts, saffron, cilantro, and a variety of Georgian spices had diners conjuring up ways to lick their plates in a dignified fashion. Fortunately the sauce was liberally applied over a medallion of turkey and slice of fried cheese.

Biggest Disappointment:
Embassy of Iraq – a commonly heard grumble was this beef kibbeh that had probably been sitting in its warming tray for many hours. Overheard nearby: “It’s like a frozen kibbeh from Trader Joes, but the Trader Joes one is better.” Ouch.

One thought on “Fun, Flavorful Fundraising: The Embassy Chef Challenge”