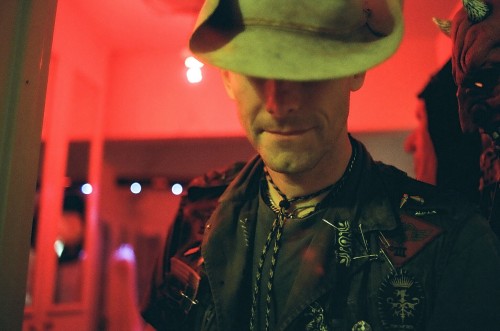 all photos courtesy of Hank3

Shelton Hank Williams, III, who now goes by Hank 3, is a rebel and an outlaw in the music world. The grandson of country music legend Hank Williams, and son of pop-country singer Hank Williams, Jr., Hank 3 has always gone against the grain. He refuses to conform to one style of music, or any set of rules, and tries to set himself apart, make his own name for himself. He recently broke free from the shackles of his former record label, Curb Records. In what could be seen as his declaration of independence he recorded and released four albums simultaneously on his own label- Hank 3 Records. Ghost to a Ghost/Guttertown is a double LP of Hank 3’s blend of country music, Attention Deficit Domination is his tribute to sludge/stoner/doom-rock, and 3 Bar Ranch Cattle Callin features Hank 3’s newly created genre- Cattlecore, a blend of auctioneer vocals and hardcore metal guitar. He is on tour now supporting the four records, and will bring his ambitious production to the 930 club this Thursday, March 15th.
We Love DC’s Alexia Kauffman got to chat with Hank 3 over the weekend, and here’s what he had to say.
Alexia Kauffman:  When you were growing up what music moved you; what were some formative artists for you growing up?
Hank 3: Heart, Ted Nugent, ZZ Top, KISS, Walt Disney. Queen, Adam Ant, Gary Numan, April Wine, all kinds of stuff. 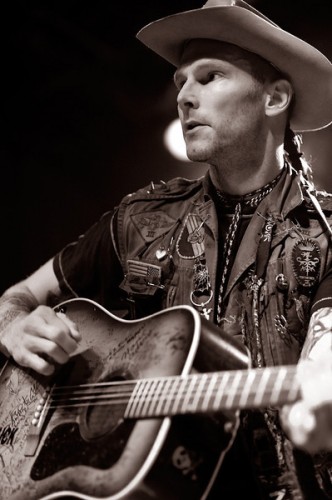 Alexia: When did first know that you wanted to play music?
Hank 3: I had my first drum kit when I was like six years old. First time I was onstage I was ten, and I always felt like a drive for it, naturally. So, I mean it was always just kinda there, and something I did for fun, and still do to this day for fun.
Alexia: What was the catalyst for you leaving Curb Records?
Hank 3: Well, six lawyers later, and they held me as long as they could, and they wasted fifteen years of my time. You know I finally fulfilled my contract, and they let me go. (sighs) So it dragged out to the very end.
Alexia: How has it been since you’ve been doing it on your own, and running your own label?

Hank 3: Well I’ve always been doing it on my own, even when I was with Curb Records. You know I don’t have management, or any of that stuff, I always just had a booking agent, a lawyer, and my band and my crew. No secretaries, or anything like that, it’s always been DIY. It’s just finally now since Curb Records isn’t there I’m able to just be myself, and put out records I want, when I want, and not have to have people holding me back for so long.

Alexia: What made you decide to do those four albums all at once?

Alexia: I mean, they’re pretty amazing. It seems like (coming from a musician who has recorded stuff) an insane challenge.

Hank 3: It was a massive challenge. I doubt I’ll ever have that much focus again in my life to pull off something like that, but you know I’m glad I had the energy to do it, and it’s my way of makin’ a mark in musical history. And you know I’ve never been able to sell my own CD at my own show in over, like, sixteen years, so that’s another reason, that’s another good reason why I wanted to do all the CDs at one time- just to be able to give my fans a chance to see it and a chance to buy it. 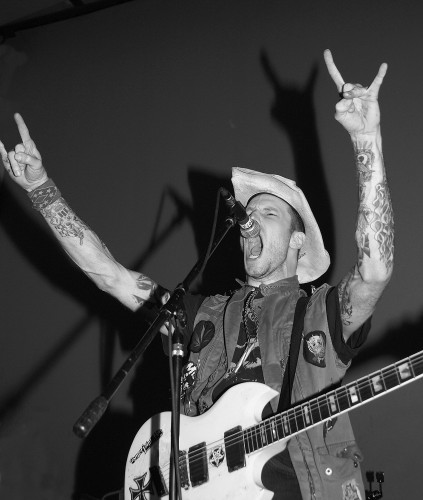 Alexia: Where did you get the idea for the Cattlecore record/genre?

Hank 3: Basically, I always thought heavy metal and, um, the auctioneering, beat of the auctioneers was a hand-in-hand kinda thing, and it just ended up workin’ out really cool. So it was just a natural fit for me. You know I always try to do things different, and I just thought it brought a different light into heavy metal.

Alexia: What about Attention Deficit Domination?

Hank 3: I’ve always been a fan of stoner-rock, doom-stoner-rock, and you know I’ve been playin’ fast for so many years, uh, it just felt good to slow down, basically, is the main thing, and do somethin’ that’s strange. You know that part of the show is weird, doomy, um, all that stuff. So, I have a lot of fun playin’ slow, and collectin’ older gear, and stuff like that. So it’s respect to Melvins, Sleep, Earthride, Pentagram, all these band I grew up on.

Alexia: I read that you had dedicated that album (Attention Deficit Domination) to Layne Staley?

Alexia: I’ve always been a fan of Alice In Chains, and he was such an amazing singer- were you all friends?

Hank 3: No, I never did get to meet him. I got to see him one time. But, you know, when I was takin’ vocal lessons and stuff I would always bring his songs in, for inspiration. And tryin’ to figure out how to sing powerful. So he was, he was always a hero of mine.

Alexia: That’s really cool. Were there any favorite moments you had when you were making these albums?

Hank 3: It’s really hard to say, I mean, you know, doin’ some of the drum tracks, or if it’s not the drums, doin’ the guitars, some of the vocal takes, you know it’s all one to me. It’s all really important to me, so even if it’s the live show, or the records, even though it’s separate, it’s always one thing to me.

Alexia: So you did so much of the tracks and instruments on these recordings, right? So was it a challenge to bring it all, translate it onstage and take it on the road?

Hank 3: Oh yeah, I mean this is the longest I’ve ever played in my life, and the most gear I’ve ever hauled. You know we usually load in to the venues at one o’clock, and we’re not done settin’ up ’til seven, and that gives us an hour, and we’re onstage for three and a half, and then breakin’ it all down.

Alexia: So what can the audience expect from this show?

Hank 3: It’s gonna be at least an hour and a half of Country, then I do about twenty-five minutes of the Hellbilly sound, then we take a five-minute break and I come back with Attention Deficit Domination, the stoner, doom-rock part of the show, and then we finish it off with 3 Bar Ranch. So I’m tryin’ to hit every aspect of it- a lot of moods, it’s really long.

Hank 3: Well, I mean there’s all kinds of different outlaws, it’s just how you look at it really. Melvins, I mean they’re outlaws, ’cause they march to their own beat. Um, I mean if it’s people that do it themselves, and goin’ against the grain, and bein’ independent about it, to me that’s an outlaw. It’s a lot more than just someone havin’ a beard, or wearin’ a cowboy hat. So, y’know, Black Flag are outlaws to me, The Jesus Lizard, Melvins, Dead Kennedys, Jello Biafra, Tom Waits, all these folks have always been heros of mine. In the country music world it is gettin’ harder to see it, because it’s such a corporate deal nowadays, but there’s a few out there. I consider one of my buddies Bob Wayne- he’s an outlaw in his own way. Or the band Jon Wayne.

Alexia: Thanks so much, I really appreciate you taking this time to talk, and I can’t wait for your show at the 930 club!

Hank 3:  Well please tell everyone to be on time, because there is no opening band. So get ’em there on time, so we can start on time, and beat the curfew, and all that. And tell the women to not wear no open-toe shoes, so no one gets hurt! We look forward to comin’ back to the 930.