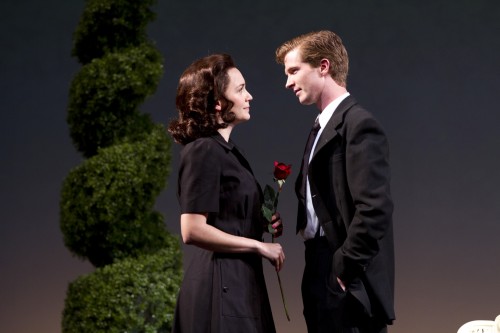 Before there was Herman’s Head there was Eugene O’Neill and Strange Interlude.

Wait, where are you going? Come back!

Okay, sorry, sorry – I get it, comparing a B-level 90s sitcom to the Pulitzer-winning work of a nobel laureate is maybe a little jarring. The Shakespeare Theater Company’s production of Strange Interlude is certainly a far cry better than the show that brought us such masterful dialog as “regret is a rough sheet to sleep on,” but they’re both trying to do the same thing: give the viewer a peek behind the curtain of what a person says, shows, and implies and instead convey every exact thought.

Michael Kahn trimmed the notoriously long play himself and directed this cast, providing us with a snappy, funny, clever, compelling, riveting, tragic story of people living the lives of quiet desperation that Thoreau described. O’Neill wanted to expose us to that song rather than just see the reflection of it around the edges and STC’s production does it beautifully. It might be longest show I have ever seen in the Harman and may also be the one that felt the shortest.

In the spirit of the play I’ll be explicit: I really loved it. 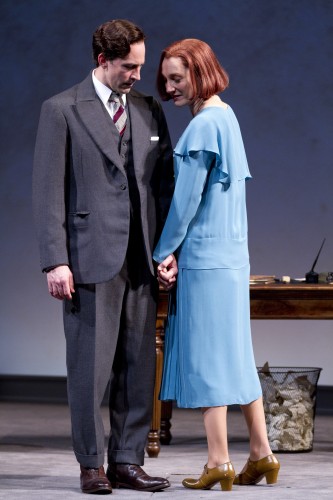 The greatest triumph in this production is one that Kahn, O’Neill, and the actors all share credit in: these flawed and variously despicable, pathetic, and abhorrent people all manage to keep your affection and sympathy. Not in every moment; some of them make it very hard to respect or pity them in turns. But O’Neill shows you the paths these people take in their quest for happiness with such detail that you can see why they’d do these questionable things. Kahn and his actors wed the actions and appearances with the wordy details of their inner thoughts – often in very stark opposition to each other – into people you can believe.

I had the pleasure of sitting next to the infinitely better educated and more erudite Trey Graham for this show, and we spent a little of one of the two intermissions wondering about the plentiful laughs the production gets from the hypocrisy and lies the characters exhibit, not infrequently to themselves. How many of these were funny to audiences eighty years ago? Were they the outright laughs a modern audience produces over some of the characters’ sexual shenanigans or did they smirk to themselves? Or were they silently aghast at some of the horrible choices these folks make? 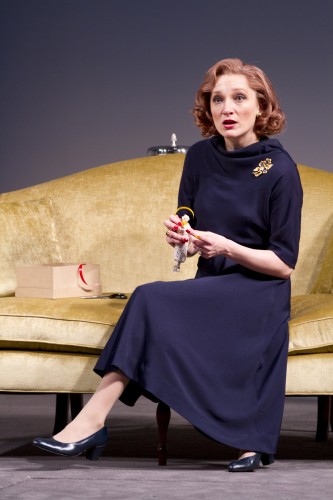 It’s to Kahn and his cast’s credit that it doesn’t matter. We see any number of older works dusted off and re-imagined into different times and locales, sometimes in (what I, in the minority thought was) an awful way and sometimes harmlessly but pointlessly. Strange Interlude is tied in time pretty tightly by its connection to the first world war and Kahn leaves it there. But our perceptions can’t help but be tied to our own time, and surely we view some choices radically differently than the original audience. In this production it doesn’t matter; even if Faridany’s Nina would have different options in life now than she would have in the 1920s we still feel her universal emotions: loss, longing, doubt, desperation, and the inevitable shrinking number of options that come with age.

The only false note I found was with the opening that Kahn tacked on. The very out-of-character minimalist white set that STC opted for here allows for projecting simple, mostly-static background images during scenes. There’s shorthand movies of what’s been going on during the passing of time in between the acts. It works well to keep the rhythm flowing, but the one time we see movie and live action combines is when we’re subjected to Nina viewing her fiance’s previously off-stage pre-play death. Asking any actor to emote sadness as a 20-foot-high biplane screams towards the ground behind them may be a lot to ask of anyone. I’m not sure why a play which has every person saying every little thing that goes through their mind needed a preface to demonstrate that Nina is upset by her loss. I’d like those two minutes and lost hearing from the roaring engine back someday.

A triviality, that. Once we get past it and start down our breakneck pace it’s forgotten and forgiven. You may need a pre-show coffee to insure you’re awake enough to make your way home at 11pm but you won’t need it to maintain your attention.

One thought on “We Love Arts: Strange Interlude”