The Capitals came into Monday night’s game fresh off an inspired overtime victory in Boston, hoping to turn the tide in their favor in the friendly red confines of the Verizon Center. Despite a fast start, a few unfortunate bounces and defensive miscues prevented the Caps from taking the lead in the series.

The scoring teetered back and forth for most of the game. The Caps opened the scoring with a filthy Alex Semin snipe past a screened Tim Thomas, but were matched by Boston a short time later. Alex Ovechkin buried a chance on a semi-breakaway, but the Bruins cashed in on a loose rebound in front of Holtby. Then the Bruins took the lead, but brilliant goal by Brooks Laich on a breakaway (and better pass by Nicklas Backstrom to get him the puck) tied the game up late.

The Bruins’ winning goal deflected off of Roman Hamrlik, who actually might have been the best defenseman on the ice Monday night, and flew past Holtby, who saw the puck but didn’t have a chance at stopping it.

The consistency of officiating was definitely a sore point in this game. There were several missed calls and several made calls that probably shouldn’t have been. It also seemed as though the few times the Bruins got called for an infraction a Capitals player was also sent off as well.

More significantly, at the end of the game, Caps center Nicklas Backstrom was assessed a match penalty for cross-checking Rich Peverley in the face after time had expired. The penalty comes with an automatic review by the NHL’s discipline committee for a possible suspension, which, with the league looking to crack down on cheap shots after Sunday’s melee-filled Penguins-Flyers game, seems likely, and would be devastating for the Capitals.

One of the highlights of the game was the creativity of Caps fans in making signs to taunt noted political activist, Tea Party member (and sometime Bruins goalie) Tim Thomas, who has made clear his dislike for President Obama.

Campaigns by local blogs BrooksLaichYear, Russian Machine Never Breaks, and Sick, Unbelievable all provided readers with plenty of assistance preparing for the game. Numerous signs were plastered on the glass behind Thomas during warmups, many fans wore Obama masks, and even a couple of giant Obama faces were spotted in the crowd.

Game four of the series is Thursday night at 7:30pm at the Verizon Center. 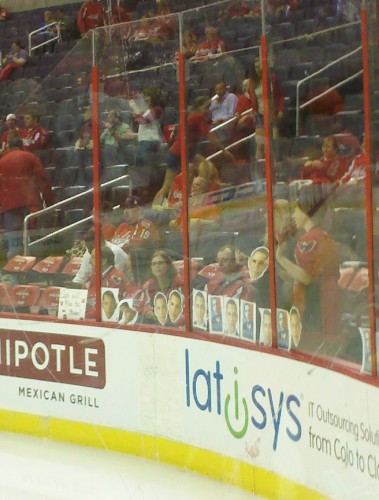 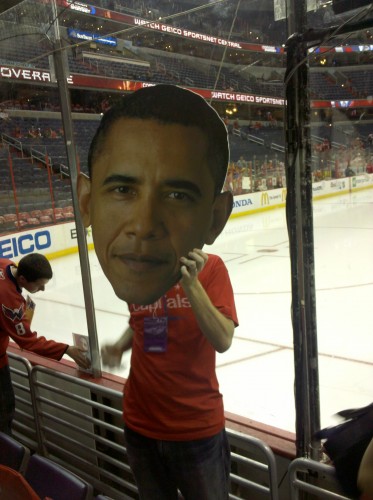 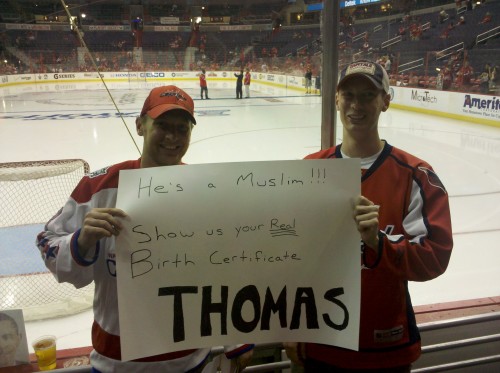