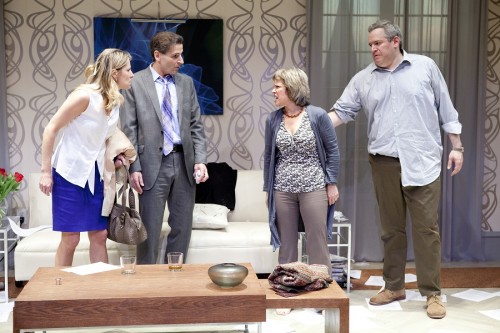 At the start of Signature Theatre’s God of Carnage, we find ourselves in the immaculate living room of the Novak family. The modern style and elegance of the whole scene looks as if it was ripped out of a catalog: fresh flowers, a beautiful city skyline, smiling faces from those that are inhabiting the space.

The serenity and beauty of the scene is but a fleeting moment in Yasmina Reza’s Tony Award winning play, the chaos that unfolds will leave the room in a completely different state: floor covered with papers, feathers, and shoes; cigars and glasses of liquor strewn about; actors with scowls that have been stripped of all manners and outward politeness.

This short one-act (approximately 80 minutes) is essentially a strip-show of political correctness where the characters take off layers of social manners piece by piece. What we end up with are subjects that bare-all to the audience.

It all starts with a fight between the sons of The Raleighs and the The Novaks. The son of Alan (Paul Morella) and Annette (Vanessa Lock) Raleigh hits the son of Veronica (Naomi Jacobson) and Michael (Andy Brownstein) Novak, knocking out the teeth of the Novak kid. The show picks up when the Alan and Annette visit the Novaks in their upscale home to discuss the matter. Alan is a lawyer in the middle of a crisis situation with his pharmaceutical client and Annette works in wealth management. Veronica is a writer and currently in the middle of writing a book on Darfur and Michael runs a wholesale supply business. Between the coffee and the fancy baked calafouti one would think nothing could go wrong in this meeting. These are two upper-class, smart, intellectual parties who are simply meeting to straighten out an incident between their children.

But quickly things unravel faster than a congressman’s excuse for inappropriate tweets/phone messages. It doesn’t take long for the quirks, intricacies, and motives of each character to rise to the surface.

Alan is a workaholic, always glued to his cell phone- even in the middle of the deliberations. This leaves Annette exhausted from picking up all of the parenting slack. Veronica feels victimized, perhaps a lingering effect from her months of reading about African genocide. She has a smile on her face but you know she wants justice for her son. Michael plays it dumb, a lumbering blue-collared oaf who has the appearance of cool but really wants no part of anything that’s going on.

Words start flying, objects are thrown, and projectile vomit spews onto the scene. Please and Thanks Yous are thrown out the window and lines are drawn but sides aren’t really chosen. As the two families start arguing over blame and parental philosophies Reza makes sure nobody really stays loyal to one side or another. You will see moments where its Novaks vs. Raleighs and in a bat of the eye it transforms to men vs. women.

What makes this all the more amazing is how the four end up hating each other yet cannot leave the room. 20 minutes into the show Alan grabs his coat and walks to the door but cannot manage to walk through it and he is pulled back into the conflict. It is as if the living room is a cage whose inhabitants won’t be set free until one side is left standing.

For a fast-paced, action-packed show such as God of Carnage you need a strong acting ensemble to pull it off and director Joe Calarco has it with Brownstein, Jacobson, Lock, and Morella. There isn’t a weak link between them and their collective efforts creates the energy that fuels the show. The show has a lot to live up to with from the buzz of the star-studded Broadway production and recent film adaptation. Signature delivers a comedic punch that will leave you reeling.

The comedy of Carnage walks a fine line between absurdity and drama. There are lots of laugh moments as we see people lose all sense of decorum but the show asks an important question: are we really more civilized than the animals out in the wild? Even though we are well dress, technologically equipped, and bestowed with a sense of “civilization”; Reza makes the point that perhaps we are not that different from the two 11 year olds the parents are fighting over- or even their pets for that matter.