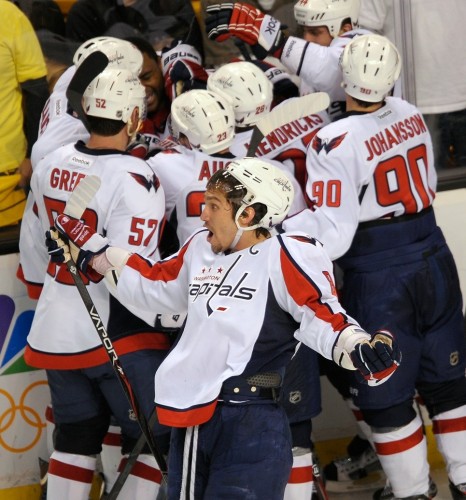 The previous six games in the series between the Boston Bruins and Washington Capitals were decided by one goal, so there was no reason to expect game seven would be any different. The Caps and Bruins did not disappoint, taking another close game to the overtime period, where Joel Ward, added by the Caps in the offseason specifically for his past playoff heroics, backhanded a rebound past Tim Thomas to send the Caps to the second round of the Stanley Cup Playoffs and the defending Stanley Cup champions to the golf course.

The Caps started the scoring off first. Matt Hendricks redirected a shot from John Carlson past Thomas halfway through the first period, giving the Caps a slim lead to protect. The Caps did an admirable job with that singular task for the rest of the period, slowing down the game and controlling the flow by getting the puck back into the Bruins’ zone every time if crossed their blue line.

Things got a little out of control for the Caps in second, as the Bruins sped of the game and controlled possession of the puck in the Caps’ zone. The tactic paid off for the Bruins, as Tyler Seguin, who scored the game-winning goal in overtime of game six, poked a loose puck past Braden Holtby and a number of Caps defenders and into the back of the net.

The third period was not enough to settle the game and the two teams headed into yet another overtime game. Thankfully, the suspense did not last long. Mike Knuble recovered a Boston turnover in the neutral zone and broke into the zone with Ward flanking him. Knuble’s initial shot rebounded off Thomas’ pads and right to Ward, who had cut across in front of Thomas. Ward backhanded the puck past Thomas for his first goal of the playoffs. And what a goal it was, instantly cementing Ward’s place alongside Dale Hunter as a Caps playoff overtime hero.

Because the NHL playoffs re-seed after the first round, the Caps will not know their second round opponent until after the conclusion of the games Friday night. The Caps could face the Devils, Rangers, or Flyers, possibly as early as Saturday.