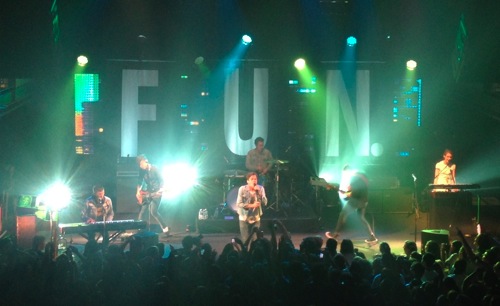 The best endorsement in the IT world that I inhabit is often, “does what it says on the tin.” Tonight, fun. was exactly as advertised. For a little over an hour, the 9:30 Club tumulted with an exhilarating triumphant joy that is usually reserved for the end of playoff sports. The volume of the crowd was nothing short of astonishing, at one point stopping front man Nate Ruess for a solid minute in the middle of a song, prompting him to exhort the crowd to let him finish the song.

Fun.’s most famous single, “We are Young,” graces the national advertising campaign for Chevy that debuted three months ago at the Super Bowl. To see the way that the crowd sang along with every song from the sextet, though, you’d have thought that they were old hands on the scene. While the core of fun. have been together since 2008, this is their first time out as headliners on the national stage, and that youth was on display tonight. If you could bottle that incredible energy, both from the crowd and from the band, you’d have the fountain of youth. I was far from the demographic, tonight. Fun.’s audience is the quarter-life crisis set, whose identities are being forged by the fire of a down economy, student loan debt, the jobs crisis, but yet still find themselves dreaming the big dreams of the generations previous. There’s no question that this is a group whose anthemic identity is tied up in the very youth they evoke. There was no finer callback in the evening, though, than when Reuss, Andrew Dost and Jack Antonoff and friends broke into the Rolling Stones’ classic “You Can’t Always Get What You Want.” Reuss, Dost and Antonoff aren’t much older than Jagger and Richards were in 1969 when Let It Bleed was top of the charts.

I have seen dozens and dozens of shows at 9:30 Club in my dozen years in DC, and this was right up there at the top of the list. Between an audience that was singing along – often in harmony – with the band, and a rock-your-face-off performance from Reuss, Dost and Antonoff and company, I found myself just coasting out of the club at the end of the night with an energy that reminded me of my early 20s, a decade ago. The 20s are a bitch of a time. You’re too young to be an expert at anything, but you’ve got all the energy that the best of experts can muster. Relationships are tumultuous, and the new politics of jobs, of grown-up-ness add fuel to the fire.

The emotional dreamscape of The Gambler just about made my night. The rich dreams of youth were the focal point of the evening, as I remember having those exact same thoughts a decade earlier.  Fun. did bury the lede, though, finishing not with their strongest effort (that would be quarter-life crisis anthem Some Nights) but with slower, quieter Take Your Time. That was just about the only flaw I could find in an 80-minute set that left the crowd sated, energized, and flowing out on the streets.

NPR streamed the concert live, and as of the writing of this article, it was still available online. How long it will remain that way, I’m afraid I don’t know.

Fun. returns for a second show on Friday night, with opener Miniature Tiger, with doors at 8pm. Tickets are sold out, Stubhub is empty, and Craigslist is barren of tickets. Still, if you can, you should beg, borrow or steal your way in to see this show. You won’t regret it.

9:30 Club is a client of mine. That relationship did play into this review.