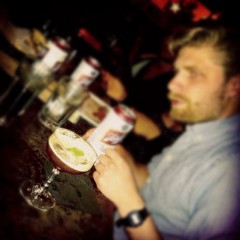 That photo is terrible. I know. Let me explain. It was taken around 1:30am last night, when I was not planning to taste anything critically and conditions were sub-optimal for drink photography. When this arrived, though, it was so amazingly good, I had to grab my phone and snap a photo because I knew I had to share this cocktail with you.

You may notice that the rest of the table is covered in cans of Schlitz. I have no complaint with cheap beer drinking and was not really trying to be the one person ordering a complicated cocktail when everybody else is drinking out of tall boys – but I had already been drinking beer since 5:00, mostly for my job, and I wanted to be tasting something else. It was relatively slow and I asked our lovely server Adriana if I could have something with Cynar. (Regular readers of this column will not be surprised by the request, Cynar being my fall-back comfort liquor of choice.)

What arrived was described as, “a favorite Derek creation,” a reference to the bar’s part-owner Derek Brown. The Cynar is mingled with molassesy black strap rum, a bit of simple syrup, and a splash of lemon juice to cut through that sticky density and add a bit of acid. It was dark and opaque, with a light frothy foam on top, floating a single bright green leaf.

After taking my first sip of the cozy, sweet drink, I wordlessly slid my drink in front of my friend Tim (the blurry blonde in the background of the photo) and gestured that he had to try it. After agreeing that this drink is, in fact, totally delicious, he registered a small complaint. As a bartender at Tabard Inn, apparently customers have come in requesting this drink, but lacking the specific rum at that bar, he has not been able to adequately reproduce it for them – so it was particularly enjoyable for him to taste it in its original formulation.

Everybody at the table was forced to take a sip, even the professed rum-hater. That I only ended up drinking about two thirds of the glass is probably for the best, because I did have to switch to something a bit less sugary afterwards (and still had a bit of a headache upon waking up this morning – though that is hardly just the Getaway’s fault) but for a single serving it was a total delight.

[Update: An earlier version of this post misidentified the drink as “The Runaway.” Mr Brown, in alerting me to the error, also notes that the cute green garnish was an innovation not in the original recipe.]