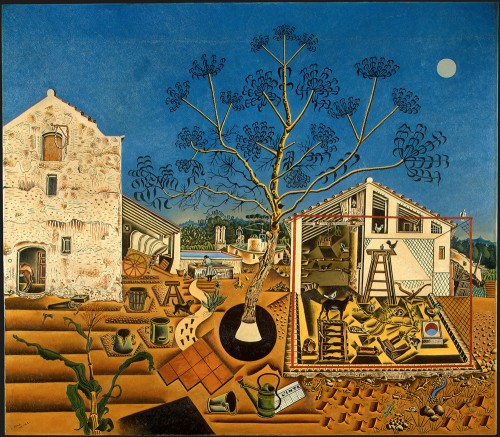 Whatever your preconceived notions of Miró might be, put them on hold and head to the National Gallery of Art.

The NGA is the sole U.S. venue for Joan Miró: The Ladder of Escape. A massive exhibit, it highlights the artist’s political side and undying loyalty to Catalonia throughout a lifetime of hardship under two world wars, the Spanish Civil War, and the Franco dictatorship. I had the chance to visit when it opened on Sunday.

Entering the exhibit, quaint gently slips into surreal. Surrounding The Farm – one of Miró’s most celebrated pieces – we see the painter mature from a sentimental youth into the experimental adult artist Andre Bretón called “the most ‘surrealist’ of us all.”

The Catalan peasant paintings that follow in the next room display Miró’s fierce love for his homeland even and especially as it was threatened. Because this is a Miró exhibit visitors can expect a good deal of whimsy, and even with a political theme it doesn’t disappoint. The rich Dog Barking at the Moon gives us a glimpse into the “ladder of escape” we will see reappear again and again throughout the exhibit, connecting earth and heaven with an element of playfulness uniquely Miró.

Of course as any artist living in a world of turmoil, Miró had an angry side, too. The second floor of the exhibit delves a good deal into art expressing that anger. During the early to mid 1930s, his paintings became more crass and despairing, including the crude Still Life with Old Shoe, Man and Woman In Front of a Pile of Excrement and a series he simply titles “Paintings.” 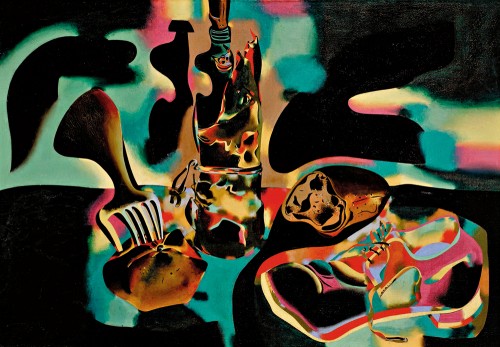 After the Spanish Civil War broke out, Miró’s work became more violent. In a room of dark paintings wholly different from the quaint landscapes on the first floor, I felt the artist’s frustrations build. In Woman Fleeing from a Fire, for example, the ladder connecting us to the celestial realm reappears; but a fire blocks access to the ladder and thus, presumably, to salvation.

At the same time, though, Miró wanted and needed an escape. Constellations – the series that secured Miró’s fame in the US – provided that escape. Containing the show’s title piece, this collection of paintings hangs clustered together on the second floor. It’s a stunning must-see.

When you go (that’s when, not if), make sure to leave time for the 17-minute film, and take breaks when needed. The show is so comprehensive it can be overwhelming, so pace yourself.

Hopefully that strategy will help prepare you for the last leg of the exhibit, which shows the artist’s experimentation, as well as frustrations, late in his life through paintings like Fireworks I-III and his Burnt Canvas phase. 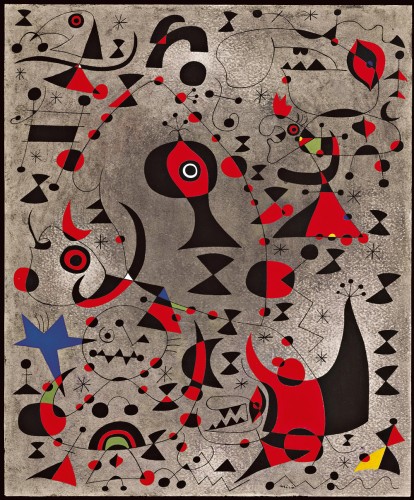 Joan Miró - Toward the Rainbow, 11 March 1941 - gouache and oil wash on paper / Lent by The Metropolitan Museum of Art, Jacques and Natasha Gelman Collection, 1998

As a whole, this show is an incredible treat for art lovers and newbies alike. Walking from room to room…to room…to room…, I realized it would probably be the only chance in my life to see a collection of Miró pieces this extensive and to observe, from start to finish, how the painter evolved through hardship to become a fanciful political icon.

It left me with a sudden urge to fight for something, or play on a playground, or maybe do both.