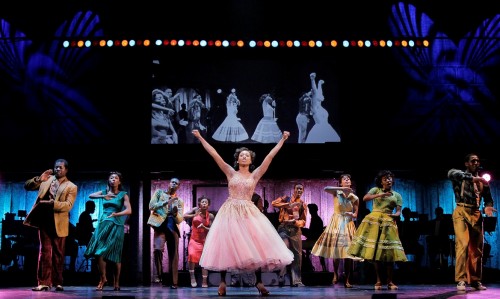 Unable to read or hold down a job, Huey Calhoun(Bryan Fenkart) isn’t what you would expect in a civil rights leader. One look at his loud blazers and one listen of his yokel drawl doesn’t really inspire images of Martin Luther King. However what he lacks in charisma and manners he makes up for in his rebellious nature.

He’s always flying off the handle, he says exactly what’s on his mind, he’s always in motion.

He’s the perfect poster child for the new sounds of R&B and Rock and Roll.

The Kennedy Center recently welcomed the national tour of Broadway’s Memphis, winner of the 2010 Tony award for Best Musical into the Opera House. Loosely based on the story of Dewey Phillips and other DJs who crossed the color lines in radio music, Huey falls in love with the R&B music scene in 1950’s segregated Memphis after stumbling into a Beale Street music club. The club’s owner Delrey (Quentin Earl Darrington) is quick to point out that Huey is out of place in his black establishment but as Calhoun puts it, the Rhythm and Blues is “The Music of My Soul.” Huey becomes a fan and ardent promoter of the local R&B scene, which includes Delrey’s sister Felicia (Felicia Boswell). Huey goes on a mission to spread the word about Memphis’ underground music and knocks on radio stations doors until he earns a gig as a radio DJ.

As a DJ, Huey breaks all of the rules of a “white music” radio station. He nixes the sounds of Perry Como in lieu of “colored music” records and tracks. As a result his show gains mainstream popularity. In a song that appropriately explains the appeal, “Everybody Wants To Be Black On A Saturday Night.” As a local media celebrity, he’s able to help launch Felcia’s music career and the two grow closer together.

The music by Bon Jovi keyboardist David Bryan includes a solid combination of R&B, Rock and Roll, and Gospel styles. The show is jammed packed with powerful musical performances where just about every cast member has an ovation-worthy moment. Even Huey’s mother (Julie Johnson) who spends most of the show lamenting over Huey’s crazy life, hits a musical home run in “Change Don’t Come Easy”.

However the true star of the show is Felicia who dominates most of the show belting out notes all night long. Boswell is an absolute talent and well worth the price of admission. Not only is she talented in the pipes department-she also knows how to rock that left leg- she may give Angelina a run for her money.

The choreography of Sergio Trujillo is packed with energy, heat, and sensuality. The blonde duo of Whitney Cooper and Jill Morrison really show off their chops  as a pair of over-eager teenagers that represent the growing mainstream appeal of colored music. A number involving a game of double-dutch is where the two truly shine.

While the show is carried mostly by song and dance, the story has some elements that are a bit too cliche. A bartender (Rhett George) that hasn’t spoken a word in years? Well we can expect him to snap that vow with a powerful and poignant line. A love affair between the white Huey and black Felicia? Expect them to fight a “white menace” of nonacceptance that includes bricks thrown through windows, beatings, and death threats. The romance between Huey and Felicia is a bit too forced and lacks any real chemistry. However these flaws should be taken with a grain of salt, this isn’t a drama like “The Help” but rather a musical with strong performances that happens to have a civil rights backdrop. That being said, the story feels like it wants to make Huey into a hero- that R&B music magically melted away many years of racism and hatred. In the end though, we find Huey in a difference place than expected and rightfully so. DJs like Huey Calhoun won’t be remembered as heroes of the civil rights movement but their progressive backing of black artists played a supporting role in the rise of black entertainers.

Instead we are left with a lasting image of Memphis not as a city that struggled with racism, but a birthplace that would later be known as the home of the Blues.