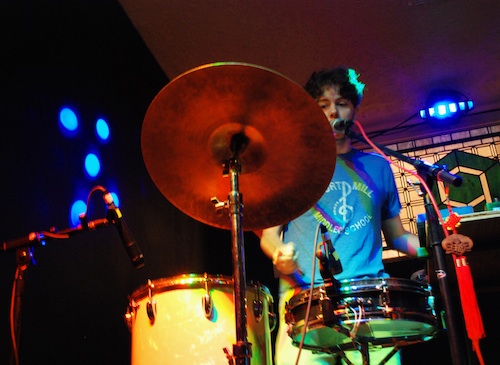 While Jason Mullinax comes to music originally as a percussionist, his current project Pilesar (pie-LEE-zur) explodes into much more than that, and is bringing DC’s music scene a one-man electro-force that blends keys, synth, guitars, vocodor, noise and loops. And he sings too! His free show Sunday evening at H St.’s Sova Espresso & Wine Bar should show off this noise-artist’s sonic prowess.

A veteran of DC’s Sonic Circuits Festival of Experimental Music, Mullinax has been playing around town quite a bit with his new release, “Stereo Space”, which brings to mind a lo-fi 60s/70s techno psychedelic time-warp. His range combines proggy atmospherics with krauty electro-cinematics, and 80s new-wave-hip-hop-samply goodness. On songs like “Absolute Zero”, “Spider Bait”, and “Keith’s Drum Machine”, his playful personality shines over it all, giving the noise a light touch. Throw in a guitarist and all sorts of other sound, and you have something that rewards repeated headphone listens. His extensive back catalog, including his previous release “Radio Friendly”, has less straightforward vocals but the same kind of electronic/noise fun.

A native of Columbia, South Carolina but now living in Takoma Park, Pilesar is another reason to believe that DC music is experiencing some sort of renaissance. I talked to him the other day about what it is he’s doing.

Jonathan Druy: How long did it take you to record “Stereo Space”?

Jason Mullinax: It took over a year, and a lot of that was making the songs, and getting the songs right. I had the thing mastered five times before I signed off on it. I’m really happy with it, and I think this is the first album that is really representative of what I do in this moment.

JD: Have you been adding more vocals to recent projects?

JM: I’ve done a lot of really weird albums in the past, and usually when I do vocals, I put a lot of effects on them, because I don’t really consider myself to be a very strong vocalist, but I think with this album in particular, and even though I’ve delved into super-experimental music, I’ve always had an appreciation for rock and pop music, so with this album I really wanted to challenge myself to do things I normally wouldn’t do. With my limited budget and resources, I wanted to try my best to make a proper pop album, whatever that means…

JD: How do you bring your studio sounds into your live show?

JM: Some songs are studio-only creations. I don’t really have any desire or need to recreate them live, some songs I just let be studio stuff. There are some songs I want to play live, like “Absolute Zero” and “Everywhere is Beauty”.

I typically play with a small drum kit, a keyboard, a drum machine, a sampler, a loop pedal, and that all runs down into a mixer, which then goes into another loop pedal, so essentially I can create a lot of that on the fly, I’ll do something on the drum machine and loop that, play a bass-line on the keyboard and loop that, then I can sing on top of it. There’s a couple songs where i’m actually playing drums, keyboard and singing at the same time, there’s some songs where I just program the drum machine and let it do its thing and I’ll play keyboards and sing, there’s some songs where I just play the drums and let the guitarist do the heavy lifting, so there’s several different methods that I use to recreate the sound live.

My problem is I write songs faster than I can record them, so I always have tons of songs floating in the ether. Once I choose which ones to record, I have to figure out how to reverse-engineer them from their live version, because I do require a lot of looping and technology, and it works well in a live situation, but it might sound a little sterile if you try and reproduce them in a recording situation.

JD: Do you do a lot of looping live?

JM: Looping is pretty prevalent in a lot of different styles of music, it allows people to back themselves up; for instance when I decided I wanted to play live – you know I’m a drummer, and a guitar player can get up on stage and hold someone’s interest with a guitar and a mic and they can do that, but a drummer gets up on stage and plays drums for 30 minutes, not too many people are going to enjoy watching that. I knew if I wanted to play songs, I knew I’m going to have to be a one-man band, and the easiest way I knew how to do that is to invest in drum machines and a loop pedal, so that way I could perform shows by myself if I wanted to.

I’ve recruited a guitarist, and he plays live with me for a lot of this material, and that really opens up the sound.

JD: Were you always a drummer?

JM: Yeah I started playing drums when I was about nine. As a kid, I always wanted to be creative, but I didn’t know what I wanted to do. I sat down in front of a drum set, and my world came into focus…