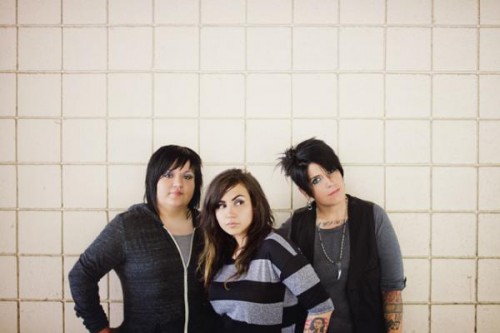 photos courtesy of Girl In A Coma

This week We Love DC guest writer Greg Svitil got a chance to chat with bassist Jenn Alva of rock trio Girl In A Coma about life on the road, music as catharsis, Amanda Lepore and more.  Girl In A Coma will be playing at Red Palace on Friday, July 13th.

Greg Svitil: You seem to be touring non-stop lately.  How has spending so much time traveling and playing shows grown your connection as band mates and as friends or sisters?

Jenn Alva: We do tour a lot and luckily, we love what we do. The girls and I have always been great friends from even before GIAC had begun. That was an advantage in becoming band mates. We were able to communicate calmly about band decisions and writing. The amount of time we spend touring has really helped as well. We are a tight team. We are family.

Greg: You manage to squeeze a lot into your time on the road.  Beyond nightly shows, you’ve been doing a lot of radio shows such as NPR’s Tiny Desk Concert, and Nina has been playing solo as well.  How do you balance everything and maintain your energy level?

Jenn: We try to do as much as we can on the road. We actually feel like we should be doing more. Our energy levels remain high because we adore our latest album Exits & All the Rest, and fall in love again with old songs we dust off and place in the set. Which keeps us excited to play day or night. 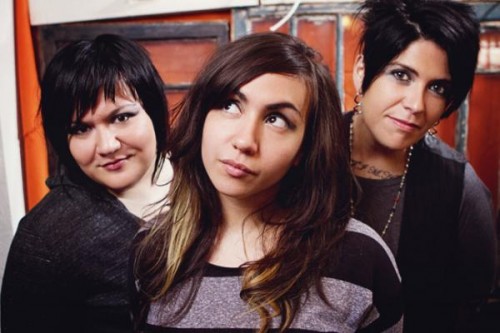 Greg: I understand that Jenn and Phanie played together for some time before Nina entered the picture- can you pinpoint where Nina became part of what you were doing, or did she enter the picture gradually?

Jenn: Phanie and I had been trying to find the perfect band mates. We we auditioning some friends of ours and we did not have any luck finding a match. Around the end of 2000, Nina had been learning guitar and writing songs. She decided to show Phanie and I one of her songs in hopes of getting our opinion and instead we asked her to start a band with us. Soon there after, we started playing shows here in San Antonio and had a small fan base. We took our group very seriously since day one.

Greg: Between Trio B.C. and Exits & All the Rest, you recorded Adventures in Coverland.  I especially enjoyed how the songs were grouped together across three 7” singles, and played “Si Una Vez” repeatedly for weeks.  How did the idea for recording many of your favorite songs take shape?  Did rearranging those songs for “Adventures…” at all inform your approach to arranging and recording the next body of original GIAC songs for “Exits…”?

Jenn: We had some free time in between those albums and Blackheart asked us if we would like to do a covers album for fun. The best part was arranging the songs our own way. Anytime you learn a cover, it helps you as a writer, which helped us write Exits.

Greg: Exits & All the Rest has earned praise as possibly your strongest record yet.  As a listener, I hear a lot of confidence and control in the arrangements and the build-up across the songs, and at the same time there’s a rawness and heaviness to the album as a whole.  You’ve said that members of the band were dealing with a lot of life changes around the time of making it.  Was the album as cathartic to make as it is to listen to?

Jenn: Yes. Phanie and Nina had been going through their own personal difficulties and as for myself, I lost my mother just days before recording. I had the funeral then literally the next day, I had to record bass. Looking back I am glad it ended up that way because recording was a huge distraction from what had just happened. I found it very hard to record “Mother’s Lullaby” in the studio, but kept reminding myself to keep it together. It is a great song. I don’t listen to it as much because although its been a little over a year, the song eats me up inside. The girls were there for me and we truly tried to make a great album.

Greg: How did you arrive at Mike McCarthy to facilitate the recording of Exits…?  Do you feel that the recordings benefit from having recorded your basic tracks live together in one room?

Jenn: Mike was on our list of producers we wanted to work with. Timing was right and we got together. His style of recording suited the songs we had put together for the album. We wanted more raw and less polished. He was our guy and specialized in recording in analog. 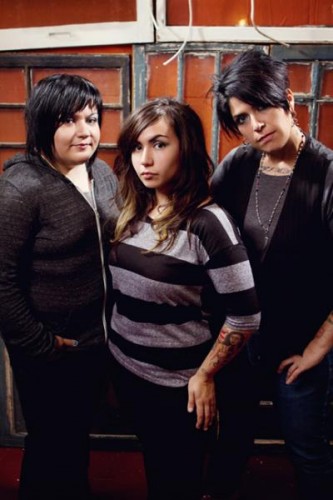 Greg: It’s hard to imagine the songs without your bass lines.  As a listener, I hear similarities to how a rockabilly bassist might approach a song, or The Jam’s Bruce Foxton.  How far off the mark am I?  What is your approach to writing, and are there other bassists who you feel inspired by?

Jenn: I love rockabilly music and hope to get a stand up bass one day. When writing, I just try and complement Nina and Phanie and also keep in mind that we are a 3 piece so I need to keep us sounding full. I’m not the best bass player, but if I knew more about bass theory, we might not sound as unique. Sometimes ignorance can be a strategic move. I name my bass guitars after bass players that inspire me. Kim my acoustic bass is named after the “Kims”, Kim Gordon and Kim Deal. Simon my Epiphone Grabber named after Simon Gallup.

Greg: Nina often plays a Fender Telecaster.  What gravitates her to that guitar?  Are there others that she likes?

Jenn: Nina actually plays a Gibson Valley Arts Brent Mason signature. She has tried many other guitars, but there is something about that one. It has a sound Nina is very satisfied with.

Greg: You recently were asked to list the strangest gigs you’ve ever had, and mentioned a show in Denton, Texas, where the venue didn’t have a PA and no one asked you to bring your own.  You made the show happen by having Nina sing to each person in the crowd up-close.  What are some other situations where you’ve had to rise to the occasion of unexpected circumstances?

Jenn: Well, we have opened up for many national bands, I’d say playing to a crowd that doesn’t want to give you a chance. I mean, not the whole crowd, but a couple of loud fans that just want to see who they came for. It actually doesn’t happen that often anymore. One time in particular though, our very first show opening for Morrissey there was one guy screaming, “Hurry up… MORRISSEY, MORRISSEY!” I told the guy, “Relax, we were huge fans too and we were also excited to see him play so chill out and let’s us just play our little set”. The crowd cheered and let us do just that.

Greg: You’ve mentioned before that San Antonio is a town of hard-working people.  How has coming up there helped shape your work ethic as a band?

Jenn: It is true, we work hard and it helps that San Antonio is so amazing. We are a unique melting pot of culture and passion. We wouldn’t have gotten as far as we had without the amazing support of SA.

Greg: Amanda Lepore appears in your “Road to Home” video. How did that collaboration happen?  How was it working with her?

Jenn: Nina wanted a transgender for the video. It so happened that our label had been acquainted with Amanda Lepore. She was so professional and very sweet. It was our first video but also one of our favorites.

Greg: You performed a gorgeous version of “Smart” for A Trolley Show in San Diego.  How was it playing in a moving vehicle?  How were the responses from other people on the trolley, and on the street?

Jenn: That performance was very fun to do. The moving part was not at all a problem and the people were very sweet. Well… except coming back we played the song again just so they could have another take. The trolley conductor was pissed and told us it wasn’t “trolley safe” to be playing. Funny. Anyway, great idea that trolley show is.

Greg: Those are all the questions that I have.  Thank you so much for taking the time to speak with us.

Jenn: Thanks for YOUR time!

Catch Girl In A Coma at Red Palace on Friday, July 13th!