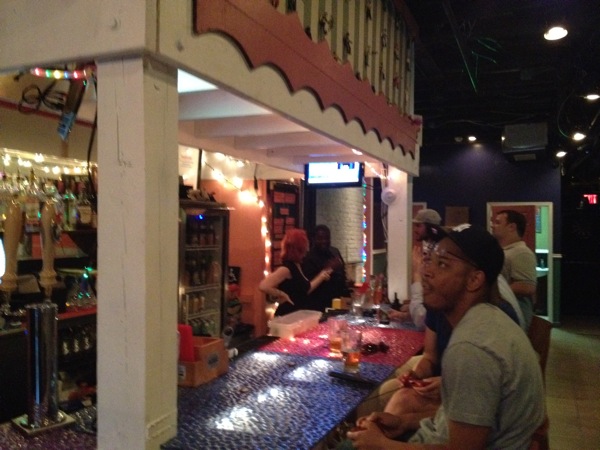 It’s a Thursday night and the line at Toki Underground spills out onto H Street. It’s two hours until you can have delicious ramen, so what are you going to do? You can sit down at the Pug or Church and State and pound beers or cocktails, or you can walk up to H Street Country Club at hope to get in for mini golf, or, you can cool your heels and wait.

Starting this week, Atlas Arcade gives you another option.

When I was about 12, my friend Paul and I tagged along as his parents went to gamble at the casino just over the state line in Nevada from Lake Tahoe. It was the best day ever, despite the car trouble getting up into the mountains, and the hot weather, because when we got there, Paul’s Dad handed us each a roll of quarters fresh from the bank, and told us we could play as long as we wanted.

Now, granted, I grew up with an NES, and later a Genesis, but arcades had games that none of those systems could touch. Spy Hunter. Galaga. Rampage. Defender. Ms Pacman on those little bar tables like you found at Pizza Hut. 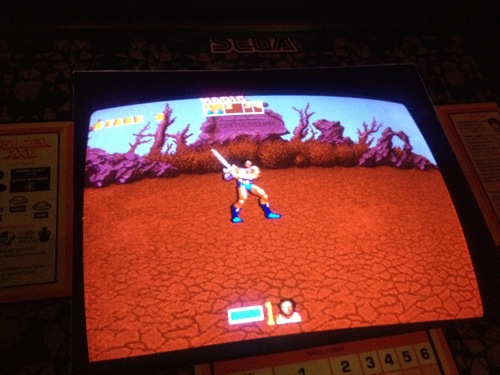 Atlas’ selection isn’t the cream of that crop, but they do have some good ones. The vintage 1981 Donkey Kong machine has the original, badly-translated labels that refer to Mario as “Jumpman” and has controls that are slightly less responsive than a 1960s Dodge Dart. While I’d love to report that I heard the dulcet tones of Gauntlet’s “Red mage needs food badly,” I just got Golden Axe, instead, which while fun, isn’t quite the same thing. Most of the games require a pair of quarters, and there’s an old-school change machine

The bar stand features a couple of small gaming systems for those posted up to the bar to play, free of charge, and they’re classic arcade games, which included Sonic the Hedgehog last night. A few moments on your food and drink options. Unlike so many arcades of my youth, food and drink is permitted at Atlas Arcade, and the drink selection is pretty good. A whole set of decent liquor options, plus a number of good beer choices. DC Brau and Natty Boh are good canned options, at $6 and $3.50 each, and there are some quality Abita beers on the list as well.  Food? Well, I hope you like pop-tarts and cereal.

Either way, if you’ve got some time to kill, and a roll of quarters, Atlas Arcade is a pretty solid place to do it. I’m hoping that they’ll regularly rotate through a stock of games to keep it interesting. I, for one, could stand at a Galaga machine and feed it quarters until the heat death of the universe, so I hope you’re listening, Eric.

One thought on “Atlas Arcade: 8-bit Fun on H Street”