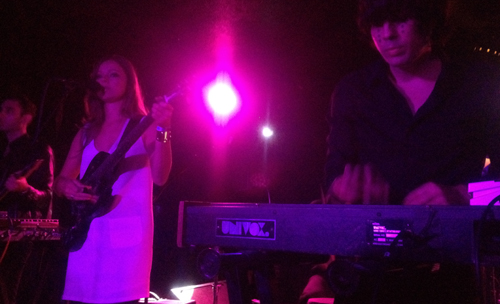 The Chromatics are touring with synthpop virtuosos Hot Chip but they came through Washington, DC, separately in the last week, leaving the Chromatics to do their own show at the Rock and Roll Hotel Thursday night. It turned out to be to the advantage of the Italo disco outfit from Portland, Oregon, however, as they successfully charmed a very packed house with selections from their last several albums. The space provided by the separation from the main tour allowed the Chromatics to unwind and exhale slowly more than a dozen disco pop gems in a darkened cavern where time could stand still.

The Chromatics have a new album, Kill for Love (released in March), which is such a sonic masterpiece for their specific sound that you are left wondering what they could possibly do next without switching it up a little bit. Leaving that question aside, the album opens with a startlingly sedate cover of Neil Young’s “Into the Black,” setting the stage for some 77-minutes of effortless cool. When chanteuse Ruth Radelet coos, “My my, hey hey, rock and roll is here to stay,” you may not be “rocking out” but you’ll be convinced nonetheless.

The band actually opened their show with the pitch-perfect stage version of “Tick of the Clock,” from their last LP, Night Drive, carefully setting the tone of the show with pulsating beats that literally count down to something more about to happen. The song and the LP, first released in 2007, deservedly have gained renewed attention for their use in the soundtrack of last year’s movie Drive, starring Ryan Gosling. That soundtrack drew heavily on Italo disco styled modern bands like the Chromatics to set the tone for its noir shoot’em-ups. (And not coincidentally, a few French bands from the soundtrack also passed through town two nights later in the Drive tour in a sold-out show at DC9.)

The Chromatics gave plenty of love to the Night Drive album, closing out the show with its title track, a glittering ride of soothing dance rhythms. They also presented their masterfully slow cover of Kate Bush’s “Running Up That Hill” from that album to close out their main set.

The new album got its fair share of attention with lovely lush “Kill for Love” and “Into the Black” as well as the chilly closer, “The River,” another song that makes great use of Radelet’s disaffected but sweet vocal intertwined with Jewel’s synthesizer.

If there a complaint about the concert, it’s a complaint common to many shows particularly in boxy small venues like the Rock and Roll Hotel. The vocal never seems quite right and the instrumentation overpowers the singer when the sound mix cannot compensate. I don’t blame anyone in particular for this state of affairs; it seems a fact of life and a sound guy is left to struggle heroically with what he’s got. In the case of the Chromatics however, Radelet’s crystalline voice is so important to setting the tone as an instrument of its own that the audience lost a big part of the affect when she couldn’t be heard properly. Again, I don’t know what’s to be done about it under the circumstances, but it was too bad.

The new album from Saint Etienne released in May (Words and Music by Saint Etienne, perhaps this year’s best release to date) demonstrate how wonderfully lush yet groovy the Italo disco influence can be, and the Chromatics also provide a worthy exploration of this dance space with their latest album (which one could buy for a steal at $5 at the show). I highly recommend checking it out.