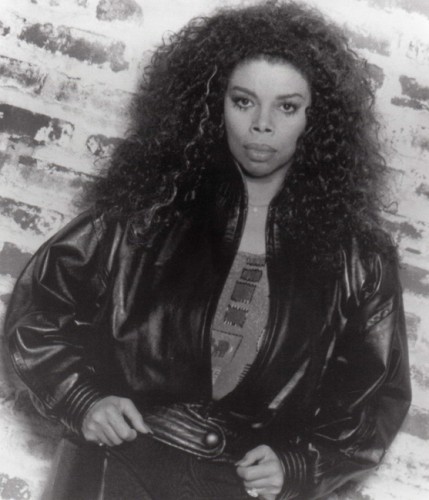 Readers here might not know much about her, but Millie Jackson was a giant in the R&B world in the 70s – a skilled, smokey-voiced singer as famous for her raunchy on-stage monologues as she was for her lush, beautifully produced albums for Spring Records, most of which were recorded in storied Muscle Shoals Sound Studios in Alabama. While 1973’s “It Hurts So Good” was one of her biggest hit songs, appearing on the soundtrack to the blaxploitation hit Cleopatra Jones,  her breakthrough album Caught Up was a rule-breaker –  a soul concept-album with a cohesive gender-war narrative threaded through the covers and self-penned originals.    That and two of her other albums from that period went gold; Feelin’ Bitchy and Get it Out’cha System.  While these came out years before the beginnings of hip-hop, the genre eventually drew on Jackson for influence, as her spoken-word style and fierce, don’t-fuck-with-me energy laid the groundwork for decades worth of female rappers.

Her show Friday night at the Howard Theater is her first ever at the venue, since it had already been shuttered during her heyday.  It should be a good one, since the 68-year-old legend still knows how to throw down in her live set.  She tours with a large band, sings her old-school hits, as well as more recent songs (she never really stopped recording until 2001), and is always ready to break it down with stories or advice in her monologues, which draw her songs out into extended jams, and make her shows as comedic as they are soulful.

I spoke with Ms. Jackson on the phone the other day.  She can be as funny in an interview as she is serious, telling me about the state of R&B music, and laughing at contemporary production technique.  She just recently ended a 13 year run as drive-time host on a Dallas soul station, so messing around with her interviewer is second nature…

Jonathan Druy: Have you spent a lot of time in DC at all?

Millie Jackson: My horn players are from DC.  And Bill Washington used to bring me into Constitution Hall all the time. I played the Warner.  I think I played, what club used to be under the Warner?  Encore?  I can’t believe I remember that.  The name of the club! I had my strawberries today!

JD: How often have you been touring lately?

MJ: Usually I do some weekends with a Summer Soul/Blues Tour, but this year I did four weeks with them, so I’ve worked more this year already than I did all of last year.

MJ: My band does! They like to get paid!

JD: Is it the same band you’ve had the last few years?

JD: Has your set changed?

MJ: Some things you just gotta do.  If you listened to Millie Jackson on the radio, you ain’t gonna hear nothing but “Back in Love By Monday”, “Hurt So Good”, and “If Loving You is Wrong”.  Like I haven’t made any more songs.  I’ve got thirtysomething albums, only got three songs to be played!

JD: Other R&B singers who were big in the 70s, like Bettye Lavette, Mavis Staples, and Candi Staton have all put out new material in the last few years, do you have any interest in recording anything else?

MJ: Not until they kill off all the bootleggers.  It doesn’t make sense for me to spend my money to put out a CD, then base that around selling it for free.  They make all the money!

JD: If someone came up to you and offered to pay for the whole thing, whatever budget you want, what kind of album would you make?

MJ: I have no idea.  Because like I said I’m not doing another one.  Music now – I heard that the Grammies removed some R&B awards?  I mean come on! Robin Thicke, the king of R&B?  Give me a break.  And you’ve got all of these singers that are supposed to be R&B/Soul, they all sound the same, can’t tell one from the other one, because the producer went in his basement and made this nice record, and hyped it up and put them in “tune”, and said “now you have a hit record, and you need to go out and sing it.”  Now they gotta learn it.  Plus you gotta learn how to sing out of both sides of your mouth at the same time.

JD: What is the state of R&B music?  Where do you think it is going?

MJ: R&B really doesn’t exist anymore.  It’s not going, it’s gone.  I spoke to someone about wanting to bring me to the Apollo.  Couldn’t find anybody to go with me.  Because everybody that I used to play with, they’re dead. And if they’re not dead, they’re old and ill.  So it makes things complicated, because even though I’m known as the “mother of hip hop”, and had the first female hip hop record (1980’s I Had to Say It), they’re not going to put me on the show with another hip hop artist, because my fans are not gonna come and see me, and have to hang out with their children.  They don’t mix!

JD:  How do you feel about a lot of artists today that might have a Millie Jackson influence?  Is there anyone you like?

MJ: Yeah, Rihanna has a distinguished voice, but everybody else wants to sound like Beyonce.

MJ: I love her.  She’s fabulous.  The first time I saw Destiny’s Child, I said “Why is she with them?” She was the one that stood out!  I think it was a show at the Apollo, and there was no comparison between her and the rest of them.  She looks good, she can dance, she can sing.  Case closed.

JD: How do you feel about contemporary R&B production?

That’s the way it is now.  The other thing is.  I love horns, live horns.  And it just aggravates the daylights out of me to hear phony horns on a record.  I call them the “deebeedeebeedees”.  I was at this blues conference last year, and this girl comes up to me and says “Millie Jackson, would you play my new record, play number 8.” And I said “Didn’t you just say the single was number 2?” And she said “Yes, but I also heard you say you don’t play the deebeedeebeedees, and number 8 is the only one that don’t have the deebeedeebeedees.”

Because that’s what you call them, no matter what you say, if you’re singing, “And it hurts so good. Deebeedeebeedee!”

JD: Isaac Hayes and Marvin Gaye did some talking on their albums in the 70s, and on Caught Up you started doing it –

MJ: Yes, but they weren’t telling the stories like mine were.  They were doing songs with talking.  The songs related to each other through the talking as they went into the next song, but as far as the stories themselves go, I don’t know anybody else who did that.

JD: Was there a moment where you started to realize people were getting more into the spoken word elements of your music?

MJ: I never had voice lessons, I did on the job training, so they always would rather hear me talk then sing.  In fact I started talking because I couldn’t sing.

I went on the road with L.C. Cooke, Sam Cooke’s brother, when Sam died, for three years, and never had a record.  I was touring all across the country without a record.  So by the time I got around to recording, I had pretty much learned how to sing, how to stay in key anyway.

So many people used to hear me say things when i’m talking, mainly because other people didn’t have the nerve to say what I was saying.  They were thinking it but didn’t have the nerve to come out with it.  So they respected me for the fact that I would say it, but the other thing was, every now and then you would get some that were serious, and thought that I actually meant what I was saying, and it was as a joke to me, in fact that’s how I ended up being a semi-comedienne, because you can’t really take me seriously with all the stuff that I was saying on these records.

JD:  In 2000, you sang on some songs for a French movie soundtrack called Comme un Aimant, a collaboration with French rapper Akheneton?  How did that come about?

JD: If someone approached you to do that today, would you?