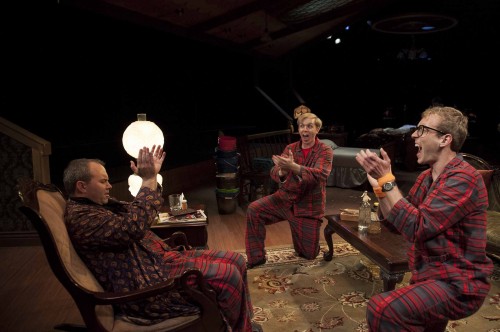 Earlier this week I mentioned how much I love farce in our We Love DC Theater Preview. I blame Lauren Cochran, my high school drama teacher who managed to lure me away from the soccer team to the drama club through the works of Michael Frayn, Ken Ludwig, and Peter Shaffer. I don’t know if it is the frenetic action, the slapstick, or the absurd plot twists. There’s nothing more I enjoy than a good night of farce and when you add British accents, it’s just more cherries on top of the bacon sundae.

Constellation Theatre Company opened their 2012-2013 season with Alan Ayckbourn’s Taking Steps, a British Farce with many of the ingredients mentioned above. Armed with the right comedic elements and a unique theatre-in-the-round staging, the show does its best to rack up the laughs but suffers from a bloated plot and a lumbering pace.

The show opens on the mercurial Elizabeth (Tia Shearer), a self-described dancer who is in the middle of writing a “Dear John” letter to who her unsuspecting husband Roland (Matthew R. Wilson). Elizabeth is certainly a firework on the stage and the complete opposite of her brother Mark (Dylan Myers), who is so milquetoast that the sound of his voice puts people to sleep faster than a vial of Ambien. Mark is also reeling from his own relationship troubles: stood up at the altar by his fiance Kitty (Megan Graves), he’s hoping for a second chance after the two are reunited when Kitty is caught “soliciting” by the police. Also in the mix are Leslie Bainbridge (Doug Wilder), the landlord of Roland’s home, and Tristram (Matthew McGee), a junior realtor who is overseeing the sale of the home from Bainbridge to Roland.

Ayckbourn stages the show’s three-story home in the round instead of a traditional unit set. Constellation flexes their stagecraft muscles well with a set that is beautiful and lends itself well to the show’s action down to the cobwebs entangle Mark early in the show. Instead of slamming doors and hectic entrances and exits that are commonplace in farces, Ayckbourn sets up trips up and down “stairs” and sight gags of reactions to action taking place on different floors- yet occurring on the same level of the stage.

Even though the show focuses on two couples and their floundering relationships, the real star of the play is the bumbling Tristam, whom Ayckbourn describes as the “hero”. McGee as Tristam really shines above the rest of the cast with his socially awkward mannerisms. He is reminiscent of a Jack McBrayer: nice, passive, and extremely un-intruding yet has to interject himself with the sale of the home.

With a healthy dose of mistaken identity, physical comedy, and clever wordplay the show looks like a winner on paper but where it fails to deliver is in the pacing. The show clocks in at two hours and forty minutes and it feels like it. Ayckbourn has been quoted that the show was, “a pig to finish,” and to me it ends much too clean for a farce. Usually the action ramps up to a car crash of sorts in the end but with Taking Steps the show feels like it goes on for half an hour longer than it should as every plot line is resolved with a nice little bow.

When it comes to farce you really don’t need to pay attention to the details- just buckle up and go with it. While funny, Constellation’s Taking Steps gets a bit lost in the details to be the kind of farce I typically enjoy.