News of the title spread throughout the ballpark via the center field scoreboard in the middle of the ninth inning when the Pittsburgh Pirates beat the Atlanta Braves, thereby securing the Nats’ place as NL East champions. Fans were in a frenzy as Michael Morse came to bat, leading off the bottom of the ninth. They sang A-Ha’s “Take On Me” in unison, as has become tradition at Nats Park when Morse comes to bat later on in the game. The roar of verbal thunder that spread through the Navy Yard air was one to be savored for years to come. 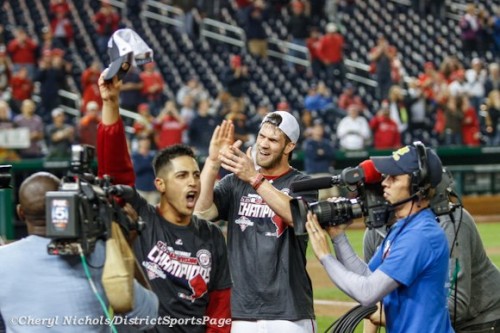 “Honestly, I didn’t think we’d get this far this year,” the team’s principal owner Mark Lerner said on the field after the game, “so I take [the wins] one at a time, always have.”

“I think we’ve [improved] so much this year as a ball club. Most of these guys are young guys who haven’t reached their prime yet,” he said, “and I think this team will be locked together for many years and they will win a World Series title, if not this year [then] it will be one of these years.”

The players brought the celebration to the field from the clubhouse, engaging their fans who’ve waited to see Washington’s transformation into a baseball town.

“I grew up here and I knew that these fans, when there was a winner, they would be here,” Lerner said. “Obviously you can hear tonight they’re as loud as any baseball stadium in the country and they’ll be here for years to come.”

The post-game festivities were a whirlwind of moments strung together as if it were a vertigo haze. Zimmerman and Bryce Harper were caught bear hugging on the field before taking a few pictures with Harper’s pop. Steve Lombardozzi strolled by his teammates carrying around a bottle of champagne with nothing but a satisfied grin occupying his face.

Edwin Jackson stood basking in the glow of the stadium lights with his baby in his arms while watching the team’s fans sing their praises from behind the home dugout. Kurt Suzuki looked humbled by the experience. Gio Gonzalez and Morse were bouncing off the walls with that jovial aura that seems to always be surrounding them.

But of all the players who had a special connection to the evening at hand, Jayson Werth had a unique vantage point having been a member of Phillies in seasons past. In fact, he was a member of the 2010 Phillies team that clinched the NL East at Nats Park on September 27 in front of a mostly Phillies fan crowd of 14,309.

He’s caught a lot of flak from his old team’s fans and pretty much all of Philadelphia but Werth knew he made the right choice by coming to the Nats in 2011.

“It was looked at as a gamble and frowned upon by a lot of people,” he said on the field after the game. “I definitely caught a lot of grief for it but realistically I knew the situation I was going to and I said all along I wanted to go somewhere where I had a chance to win for a long time and it turned out [Washington] was probably the best place I could’ve went and I felt good about it when I signed here.”

One thought on “A Celebration Eight Years In The Making: The Nats Clinch Their First NL East Championship”