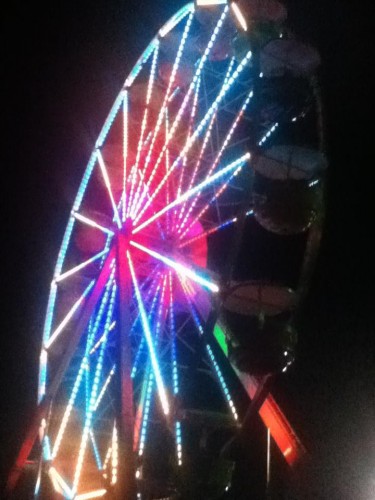 While a disproportionately large part of my day felt like it was spent either being cold (and I was a smart one who brought an extra sweatshirt along- there were plenty of people walking around in halter-tops and short-shorts), inhaling dust from the herds of people clomping around, searching for my friends (extremely crappy cell service the whole day) or waiting in lines (20-plus-minute lines for everything from getting a drink to taking a pee in a dark port-o-potty with no toilet paper) there were, thankfully, a couple redeeming high points by the end of the night. After waiting in line for probably a half-hour while listening to M83, my friends and I got to ride on the beautiful, lit-up ferris wheel which was adjacent to the stage on which M83 was performing. This was a magical moment. We had, for that brief time, a perfect view of the stage, awesome lights, perfect sound, and the scary-big crowd in front of the stage, which I was so thankful not to be in.

My time at the festival was ended in the most perfect way, giving redemption to a pretty exhausting day. I managed to get into the pavilion area for Jack White’s set, and it was amazing! I may not have felt the same about it had I been on the lawn, watching him on a screen, as I did for the first couple songs, but once I was in the pavilion, I ran into the pit, and ended up four rows from one of my favorite rockers ever. He was full of energy, and backed by an awesome, all-female band that provided soul, chops and rocking energy for the whole set, supporting White through a super set that included lots of White Stripes songs to please the crowd.

Sarah: After a 3 hour drive, a 15 minute trek, and a disorienting walk through the Merriweather Post Pavillon grounds in search of food ($11 chicken tenders and a Bud Light Tall Boy for $8.50), we found Santigold. I wish I could say she was a sight for sore eyes, but unfortunately the bright sun was setting behind the stage making it difficult and painful to watch anything but the jumbotron. Though, Santi White, aka. Santigold, performed her distinctive brand of pop/electronica/reggae with energy, the stage looked a bit too large for her and the 2 Caribbean style cheerleader/dancers who accompanied. Perhaps it was the unfamiliarity with the material or the aforementioned sun, but most of the crowd seemed unenthusiastic. My friend described it as generic pop music, which saddened me as I think she is one of the more unique female acts out there today, though perhaps better heard in a smaller club than an outdoor music festival.

Unfortunately, poor planning on my part made a trip to the ATM necessary. The lines were long, but I figured waiting in line with friends for 30 minutes while listening to Santigold wouldn’t be anything less than a good time. I was wrong. I am always more hopeful about festivals than previous experience should warrant. Festivals like these host numerous acts who share little in common (Nas and ZZ Top?), making for little unity or cohesiveness among the crowd. And free festivals turn out the worst of humanity. Most of the ATM line was drunk or high. The upstanding citizens behind me made a show of spewing their trash around and calling anyone a faggot who dared to question their littering. On top of which, the ATM machines were not working anyway. Apparently they needed a cellular signal to contact banks in order to disperse funds and were unable to find one…at the Virgin Mobile Freefest. In fact, there was nary a cell signal all day. In order to meet up with friends later, we were forced to make plans old-school style. Luckily, we were all born well before 1990 and had previous experience with this type of planning.

Next we headed over to the main pavilion to watch the Alabama Shakes. I first heard the Alabama Shakes last year on NPR and was immediately smitten. In September 2011, they put out a 4 song EP and released their first full length album, Boys & Girls, in April of this year. The lead singer, Brittnay Howard is almost a reincarnation of Janis Joplin. Though her voice is less raspy and whiskey soaked, she brings the same soulful passion to her singing. Her enthusiasm was clearly infectious as the seats filled up fast and the crowd thoroughly enjoyed themselves.
I left Alabama Shakes a little early to get some cash from another bank of ATM machines. I first checked to see if the machines were working and then figured I had 20 minutes before I needed to head over to watch Nas. A review of waiting in line for the ATM machines for 40 minutes may be even more boring than actually waiting in line, so I will spare you. Suffice it say, I was able to see Nas perform 2 songs. My review: He is Nas. He filled the stage with his presence. I then went to wait in line for the bathroom.

Jonathan: You’d think Virgin Mobile would realize that by placing their giant clusterfest in an area with crappy cellphone reception and not doing anything to fix it, they are not doing a good service to their brand. I guess my smartphone was one device among thousands, struggling to find sundry friends by using texting or voice, which ultimately proved epically impossible (“I’ll meet you by the thing with the thing!” “Where? On the bench? Hello?”). Even the patchily attainable wifi couldn’t help. The thing is, once I actually found my friends, there was nothing to really do but avoid being jostled by the crowds and finding a good space to watch. Oh, and wait in long lines for $10 coronas and $10 pit beef. And toilets.

So once I got past the initial frustration of navigating the übercrowd and the bathroom lines and the food and drink lines and the not-being-able-to-find-anyone-ever, I was able to enjoy Dismemberment Plan, Nas, a bit of M83, and a dash of Jack White, before spending my last hour mesmerized by the swirly light-and-sound Oonce! of the Dance Forest.

I would say Dismemberment Plan was my best Virginfest moment – probably because I had just arrived when they started, the field wasn’t has jam-packed as it was later, and there’s something fun about watching an old-school DC favorite in their reunited incarnation, on a giant screen, doing songs like “The Ice of Boston”, which I hadn’t heard or thought of in 11 years. In afternoon daylight.

After wandering around for a bit, I settled in for Nas’ set, lying down in back, with actually a good view of the stage and the adjacent screens. He wore his 90s hip-hop love on his sleeve, and had a laid back feel as the sun began to set.

Then, as the crowd swelled and the darkness rose, it was hard to sit still for an entire show. M83 was proficient and excellent, their post-shoegaze atmospherics absorbing for a time, but the whole set-up of this festival really seemed geared towards endless roaming and aimless wandering, until the people-watching became tiresome and redundant, and it was time to hit Dance Forest. Oonce! Oonce!