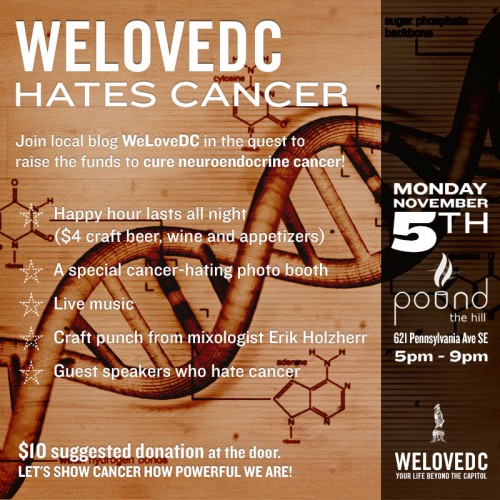 When I think about Cathy, I picture her tending a sauté pan of scallops over an open flame. She is attentive, determined, fearless, and holding her own alongside one of our city’s best chefs.

In this memory, it’s early on a Saturday morning; I am the food editor here at We Love DC (a position I gave up in 2010), and she’s the cooking writer. We are conquering yet another recipe for the Capital Chefs series, a series we invented together where I would casually interview a local chef and they would teach Cathy how to cook a recipe from the restaurant.

We won over some of DC’s most bullish perfectionists this way, getting them to give us the scoop on what they love about cooking in the nation’s capital. In retrospect, I chalk most of that up to Cathy’s prowess behind a stove, and her appreciation for learning new techniques. Because of that charm, she and I were able to bring you recipes and stories straight from chefs across the city.

Outside the kitchen, Cathy is a great friend; one of those genuinely good people that you can’t help but like. She’s recently married and is attending Georgetown for her MBA. When I think of her, I think of a smart, fun, easy-going woman who can make a mean risotto.

I do not think of cancer.

Well, that is, until recently. I do now. After a single stunning email, the kind that assaults you on an average Wednesday morning, changing everything. It was then that we learned about her recent diagnosis of neuroendocrine cancer, the same kind that killed Steve Jobs. The cancer without a cure. The cancer that has a five year survival rate.

Except, it doesn’t actually add up, you know? Cancer? In this twentysomething, just-married, scallop-browning wonder woman? You have the wrong girl, sir. Not Cathy. Cathy doesn’t have cancer.

But she does have cancer, it’s one of those injustices. And for a while, the team here at We Love DC was sad, stunned by her mortality and the unfairness of it all. But we can’t sit here stunned, first of all because she’s not having any of that, but second, because there’s a cure out there and she’s determined to get it funded. We can help. YOU can help.

A potential cure for neuroendocrine cancer is sitting idle in a freezer at Sweden’s Uppsala University. Sounds very science-fiction, right? The biotech industry has abandoned it because it cannot be patented (ie., no profit). But we don’t need them! As a community, we can raise the funds to potentially cure neuroendocrine cancer and help people like Cathy everywhere.

Here’s what you can do: We Love DC is hosting a happy hour at Pound The Hill on November 5th to raise money for the cure of neuroendocrine cancer. We’re calling it We Love DC Hates Cancer. Because we do. We love a lot of things, but not cancer. Fuck cancer. Cancer is the absolute worst.

So help us. Come, drink, be merry (Cathy does not think this is a time to be sorry or sad) but also learn about neuroendicrine cancer and help a strong, awesome woman, fund a cure. Everyone has a story of someone that’s been affected by cancer and a lot of us feel helpless. So here’s a way you can help. Join us, won’t you?

$10 suggested donation at the door. Let’s show cancer how powerful we are!

If you cannot attend, please consider donating to Cathy’s cause. Visit Unite Against to learn more.